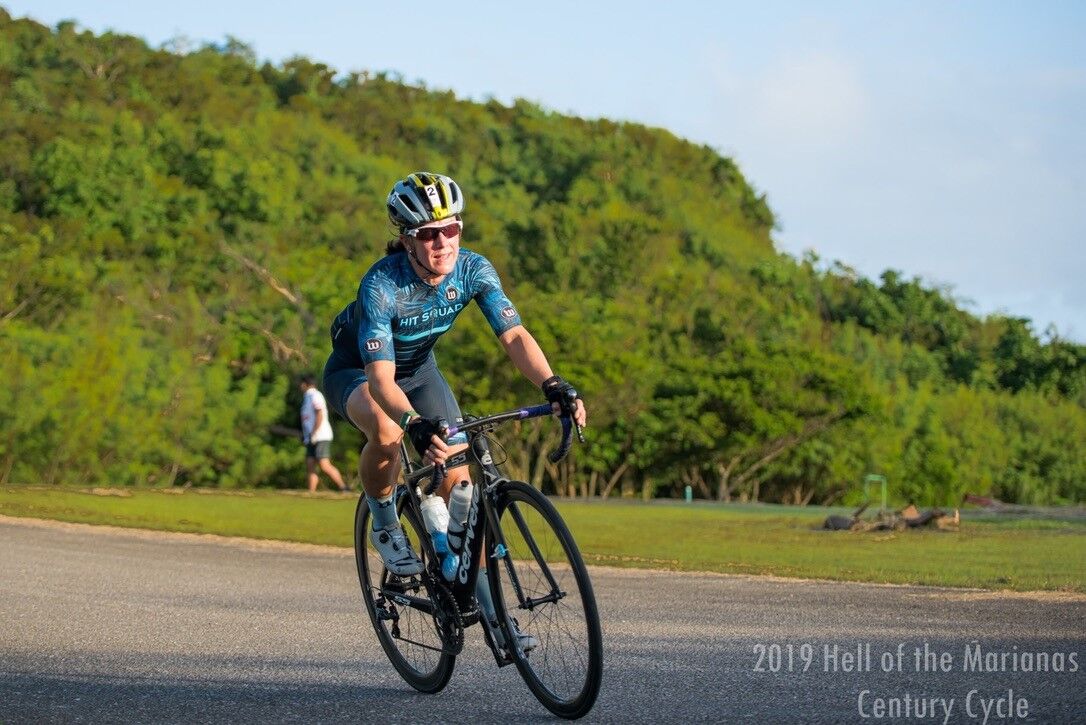 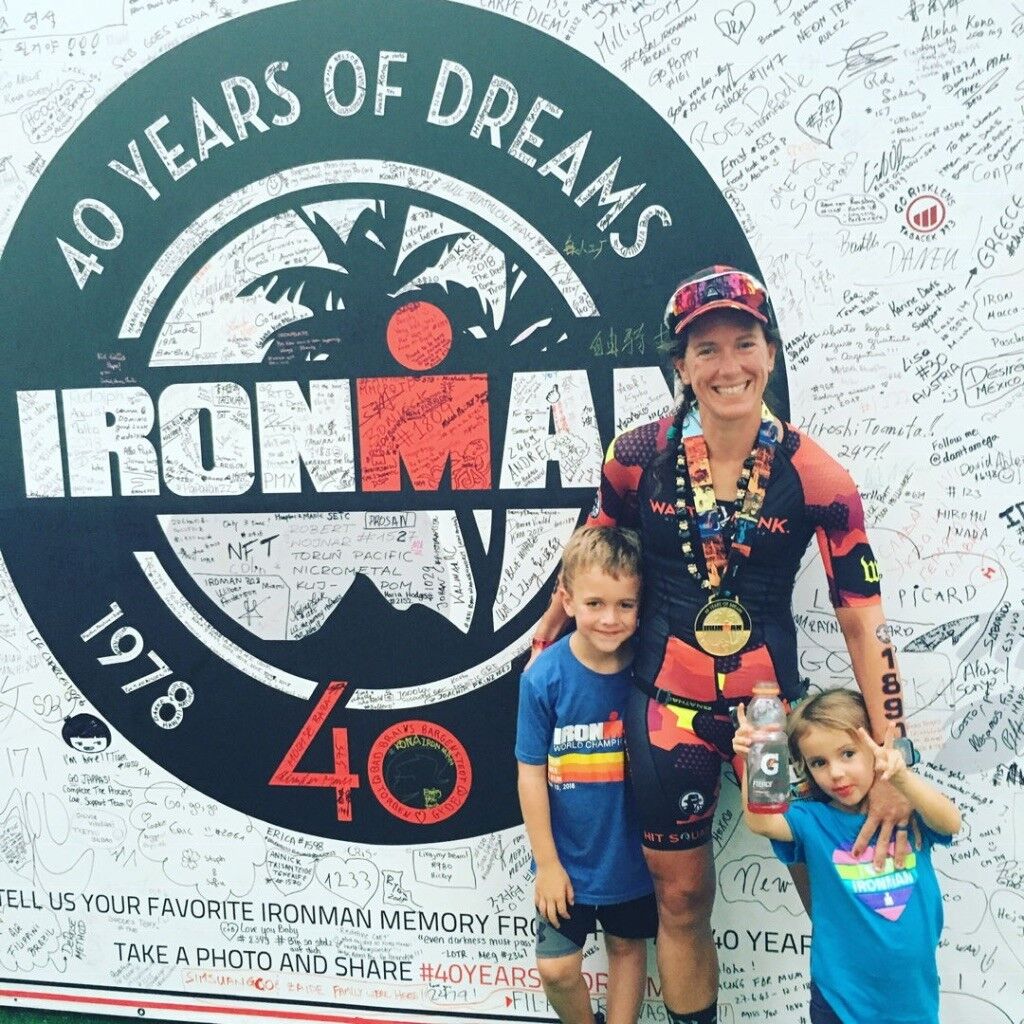 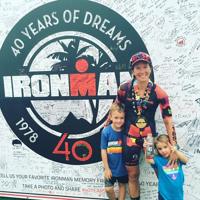 FAMILY ALWAYS: Local professional triathlete Laura Nadeau is shown with her children, Grayson and Cameron, after a race. Contributed photo 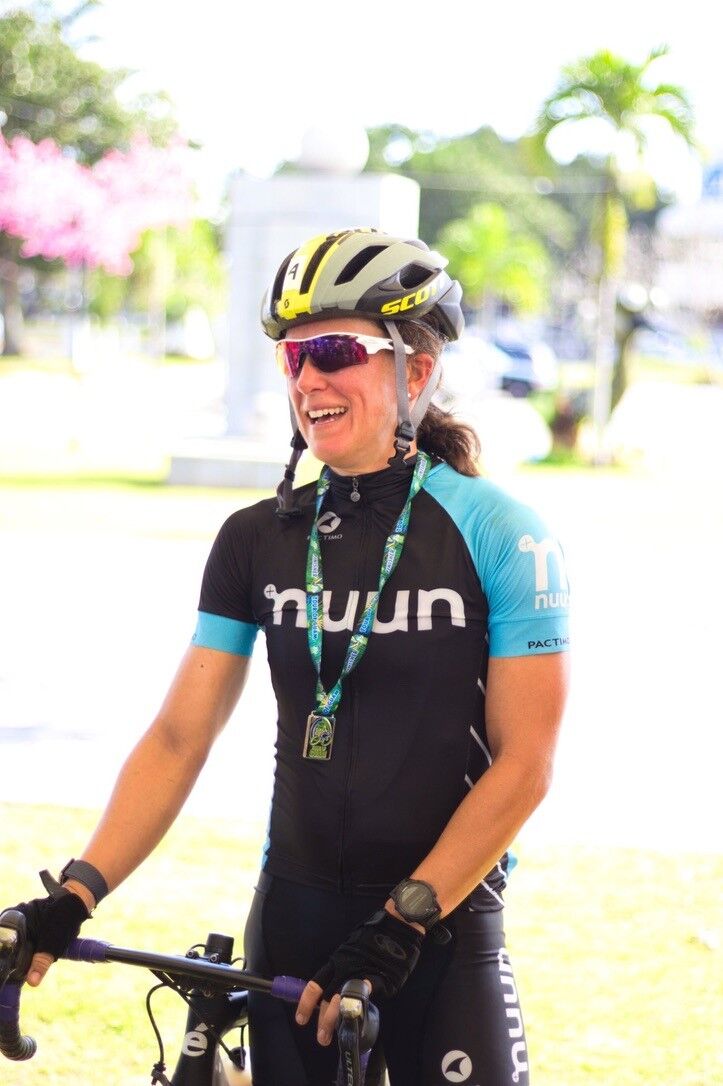 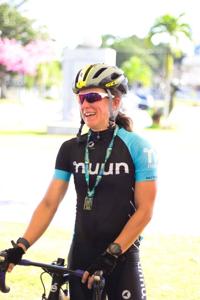 TURNING PRO: Local professional triathlete Laura Nadeau is shown in a competition in 2019.

FAMILY ALWAYS: Local professional triathlete Laura Nadeau is shown with her children, Grayson and Cameron, after a race. Contributed photo

TURNING PRO: Local professional triathlete Laura Nadeau is shown in a competition in 2019.

Editor’s Note: This is the first in a two-part series on professional triathlete Laura Nadeau. In the first part, The Guam Daily Post got the opportunity to discuss her last race and her decision to turn pro. Next week, Nadeau will share more about her career goals, training methods, and the role her family plays.

Local professional Laura Nadeau said she has been “slacking off a little bit” with her training since the pandemic put a halt to her grind-it-out schedule.

She had just turned pro when she took on Ironman Canada/Whistler in July 2019. She finished 13th and was eager to get her next pro race under belt.

While she performed well, Nadeau said competing in Canada probably isn’t on her to-do list anymore.

The bitter cold didn’t help her cause, she said.

“It was so cold. I froze. I though that I would have frostbitten toes and fingers. I was very worried about the cold, because I love to race in the heat and I do very well in the heat,” she said. “Obviously, I should have been a little bit smarter with my race choice. I didn't warm up.”

Halfway through the 96-mile bike ride is when she said she finally got feeling in her toes.

“I attempted to jump in the water and had to stop at 400 meters and get myself together,” she said. “I won’t do that ever again.”

While the bitter cold was definitely a factor, that isn’t why the mother of two isn’t looking forward to a race on that side of planet for a long while.

“I’ve always really been excited to do races in the states and in Canada,” she said. “But I was kind of disappointed because it wasn’t really that sense of community that you feel in the races here on Guam and the Ironman races in the Philippines.”

The level of support and camaraderie is off the charts in the Philippines, Nadeau said, adding “In Canada, it felt like everyone was out for themselves. They were looking at each other in judgement. It was very different.”

Given the opportunity to race in the Philippines, however, Nadeau said she would do it in a heartbeat.

“The sense of community in the Philippines was awesome,” she said. “They look at you, they talk to you … everyone is so supportive.”

When asked why she turned pro, Nadeau attributed it to her desire to continually challenge herself.

“I was coming in first or second in the age-group races over in Asia and the Philippines and I qualified to be a professional,” she said.

"Why not take it? Why not try it?,” she wondered to herself. After weighing it all out, she realized there were more pros than cons.

Other than pride if races didn’t go her way, there wasn’t anything important to lose, she said.

Looking at her kids – Greyson (7) and Cameron (5) – she said it was important she set the example and continually set new bars for herself.

“I think that is a good lesson for anyone. I wouldn’t want to settle because I was just scared,” she said. “I wanted to keep going and get the best out of myself. So, that’s why I did it.”

Nadeau is pragmatic when she talks about turning professional and becoming an inspiration.

While it’s okay to be happy with being who you are and doing what you do, Nadeau advocates stepping forward or maybe just a little outside your comfort zone.

Consider an extra class, or sign up for a 5K, she said.

Sometimes, she said, we are our biggest enemies and we hold ourselves back.

Turning pro was about stepping forward and shaking off her self-doubts and insecurities, she said.

“I am not an elite professional at all. In the pro field, I wouldn’t have been in the top five,” she said. “I was just a little nervous to take that leap because maybe of my pride and my ego. But, I put that aside and said, ‘What the heck, there’s no point in not taking this challenge on.’”

Prior to the pandemic, Nadeau had hit a stride, seeing tremendous improvement in her swim times.

“I had improved a ton, because I knew that’s what I needed to focus on. I was excited to put it to the test,” she said. “Yeah, I can’t swim very fast, and that race in Canada was brutal, with the cold. Obviously, this pandemic, has flushed all that down the toilet because I haven’t swam in six months.”

She was ready to go again after Canada, but she admits she could feel herself needing a break from the constant training and the pressure of competition.

“I was kind of feeling burned out in the spring of 2020. I was pushing through that burned out feeling, hoping that it would go away,” she said. “But then the pandemic hit and we had to stop.”

In a way, she says, the pandemic allowed a reset, forcing her to reassess herself and her methods.

Nadeau says she probably wasn’t training at her best prior to the pandemic despite the improvement in times.

“In a way, I kind of feel like I needed a break, and this pandemic has given me the opportunity to take a break,” she said.

While the reset was good for her mind and body, she thinks she might be getting that itch to compete again.

“It’s been six months, maybe five months of this pandemic, and I’ve been watching eco-challenge shows on Amazon Prime,” she said. “I have myself yearning to get back and do a race. I’m missing it. Right now, I’m wanting to compete.”