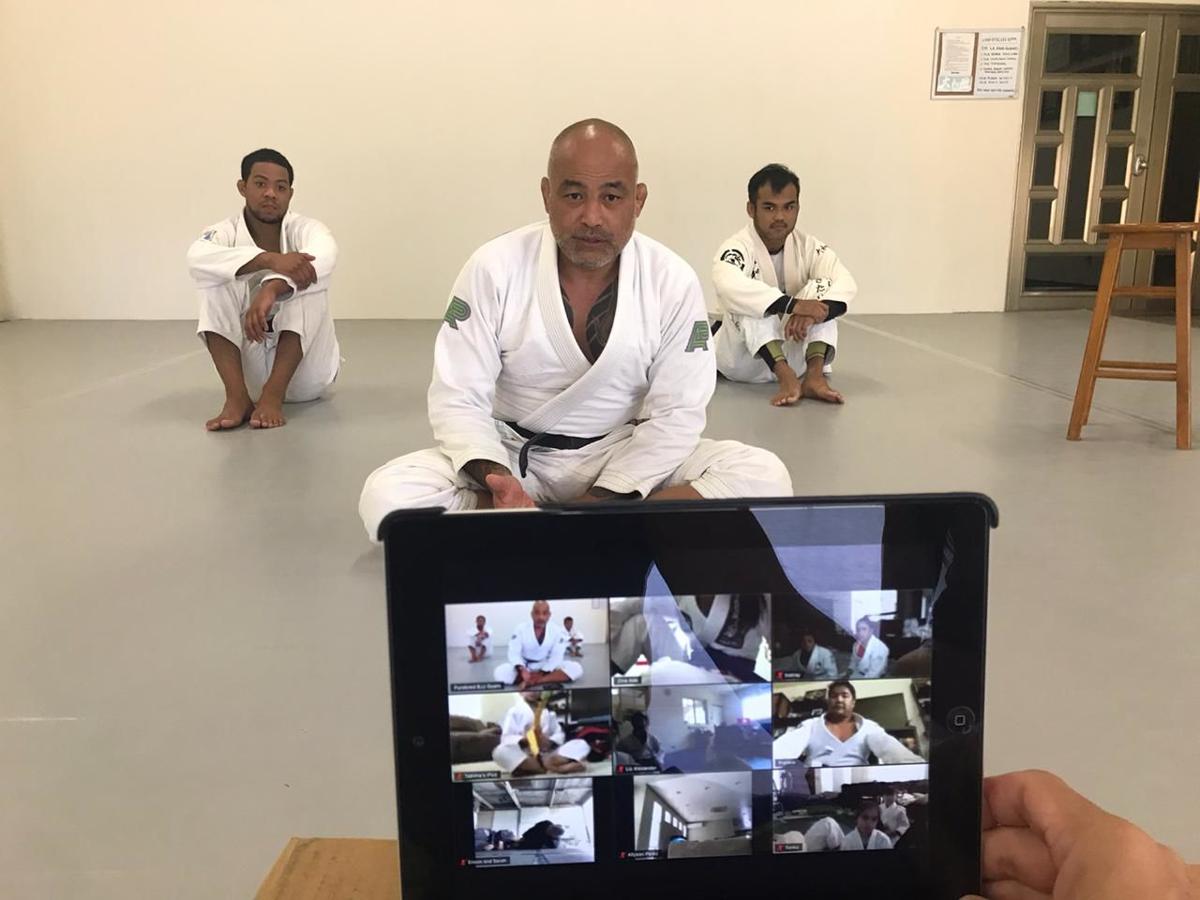 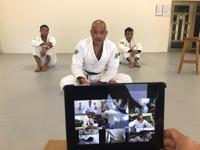 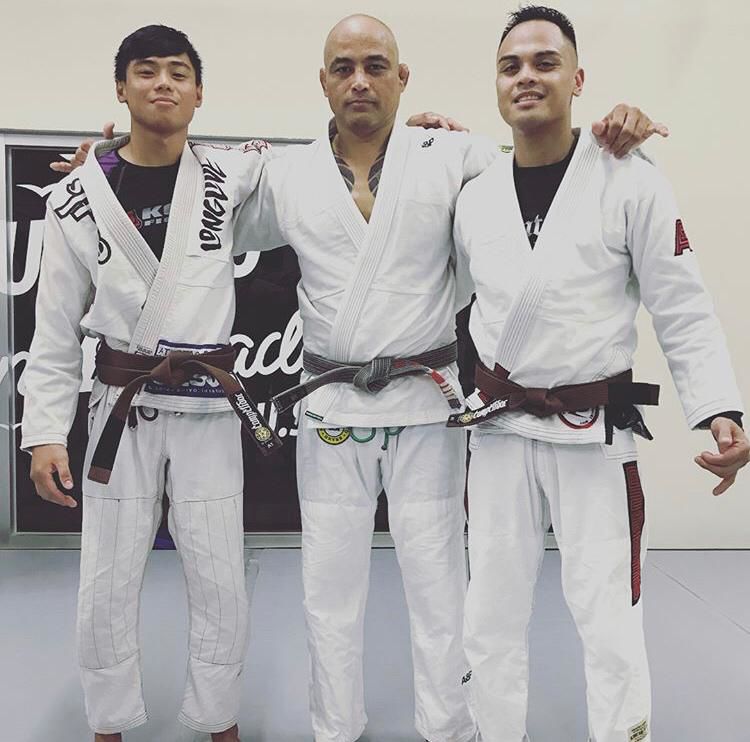 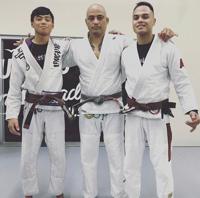 TRAINING: In this file photo, from left, Oscar Ladesma, Stephen Roberto and Lloyd Cubacub gather after a training session. Photo courtesy of Purebred 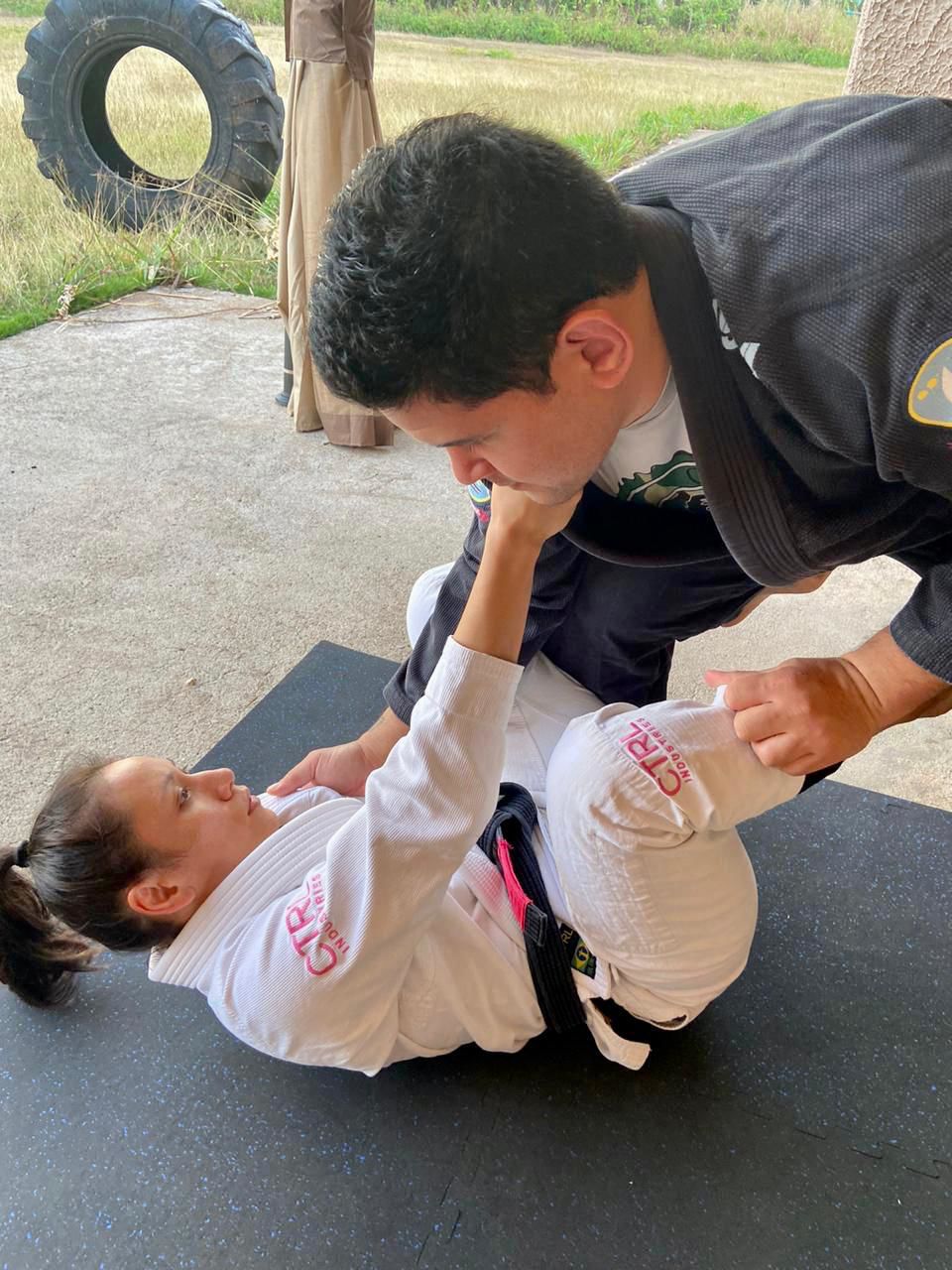 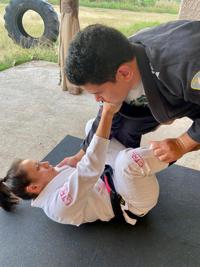 TRAINING: In this file photo, from left, Oscar Ladesma, Stephen Roberto and Lloyd Cubacub gather after a training session. Photo courtesy of Purebred

When Purebred Jiu-Jitsu Academy owner Stephen Roberto was stateside last month, he heard people talking about the seriousness of the coronavirus. While he hoped the virus wouldn’t hit Guam, he knew the odds weren’t in his favor.

In February, while in Denver and El Paso, he saw the writing on the wall.

“I kind of just had a hunch that this thing was going to create some sort of big impact a little bit earlier on,” said Roberto, quickly formulating a plan to keep his school going and protect his members.

A few days before Gov. Lou Leon Guerrero ordered the closure of all of the island’s gyms, he shut down his academy and told 300 members to go home and prepare for the eventuality.

His priority was to shut down the gym, get the word out to his members, and try to flatten the curve, he said.

Although necessary, the move was not welcomed by all.

“Just thinking how close we are in proximity to Asia, where the epicenter was, the amount of tourists that we get, I just had a hunch that it wouldn’t hurt to go ahead and take the precautions to close early,” Roberto said. “I had gotten a little whiff that some of the people were - kind of - upset that maybe I had jumped the gun on it, but I just thought that it wouldn’t hurt.”

The stories he heard spooked him and his gut was right.

"I was in Denver and El Paso late February, and just watching how those communities were already talking about it,” he said. “I had been working with guys in the military that already had their ears to the ground in regards to how this thing was spreading very quickly, and no one had any real answers for it.”

With the gym closed, Roberto and his staff ramped up the effort to provide training videos and look for a viable platform for providing live instruction. After a week of canned videos, combined with a barrage of WhatsApp, Instagram and Twitter messages, Roberto switched to Zoom.

“The Zoom app has been an incredible tool for us to use as school owners,” Roberto said. “Zoom seems to be able to handle a larger load of people viewing your content in real time.

“I am able to look at them on their camera and see how they’re moving, and what they’re doing, and you’re able to provide real-time feedback on a camera-to-camera basis. I can see the whole class doing everything, and they can see me.”

In a time that requires flexibility, adaptation, and figuring things out on the fly, Purebred is doing its best to stay ahead of the curve, not just flatten it.

Since jiujitsu is a two-player martial art, and the island is on lockdown, Roberto and his members have gotten creative. Without access to grappling partners, stand-ins have included: makeshift dummies, chairs, spouses, boyfriends, girlfriends, family members and even a dog.

“Sometimes, I’ll position my dog - she’s a French bulldog that likes to jump up,” said Lloyd Cubacub, a brown belt who has practiced jiujitsu for 10 years. “You make use of what you have,” adding, he sometimes recruits his wife, Rachel.

“There’s a whole bunch of videos on YouTube of people building tackling dummies out of a spare jiujitsu gis and some stuffing for the inside,” said Roberto, adding, “and then, you have a usable partner, so to speak. … Some people are even using chairs.

“I am telling my students to take this time to use your family members. Someone that’s never done jiujitsu … show them how to drill, those people who are within your direct contact, your direct family that you’re quarantined with. It’s trying to get the students to get creative, adapt and improvise in this chaotic time.”

With his students needing to stay active, control stress and blow off steam, Roberto stresses the importance of establishing an exercise routine.

“It helps to have just a little more normalcy,” he said. “For some people, the gym is such a happy place. … They come and burn their stress off and feel good by getting a workout. And now, by not having that place to go to … they’re trying to just get used to doing everything at home.

Roberto also recognizes that people have a lot on their plate.

"The priority is not jiujitsu right now,” he said. “The priority is survival, preparation and preparing for the unknown. … It is kind of overwhelming.”

Despite this being a tough and unknown time, we’ve just got to pull together and beat this, he said.

For Tracy Matanane, a black belt with nine years of experience, she has been practicing with her boyfriend, Joshua “Wu” Jerome, also a black belt. She also practices with her daughter, Kailey, 10, a grey belt.

“Our body kind of needs to keep in the groove on the jiujitsu movements,” Matanane said. “Being stuck in the house, it's important to stay active and maintain good eating habits.

“It’s always good to keep your heart rate going at a different pace.

For Cubabcub, the ordeal has been challenging, but he feels his training has prepared him to handle adversity.

“Just thinking how close we are in proximity to Asia, where the epicenter was, the amount of tourists that we get, I just had a hunch that it wouldn’t hurt to go ahead and take the precautions to close early.”