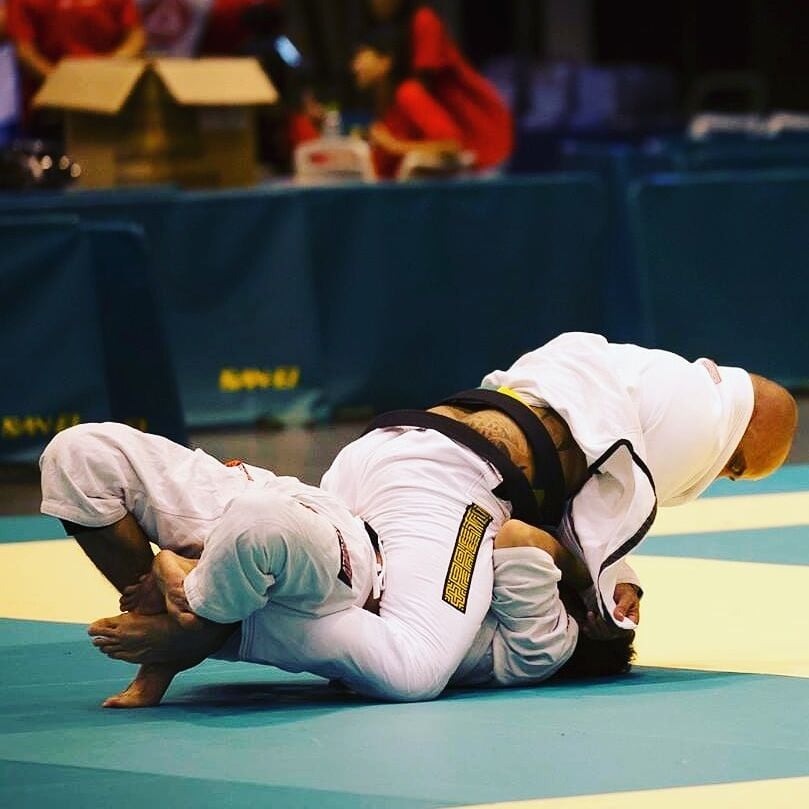 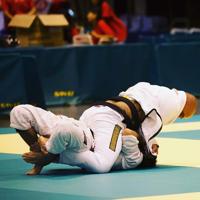 MAT TIME: In this file photo, Stephen Roberto competes in a jiujitsu competition. Roberto is the owner of Purebred Jiu-Jitsu Academy and will be stepping back as head instructor on July 3. Photo courtesy of Stephen Roberto 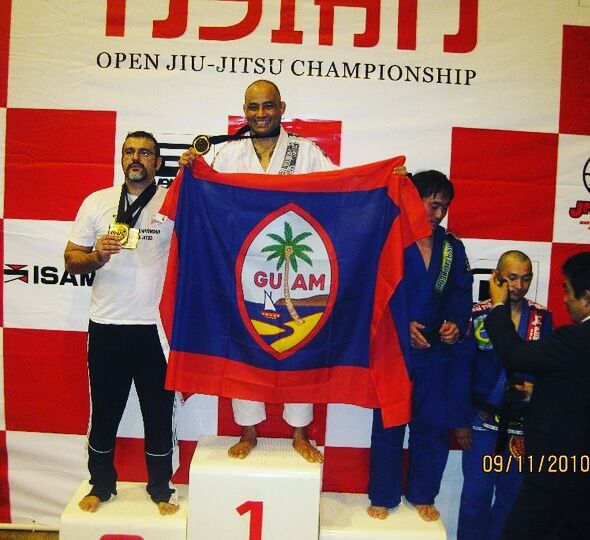 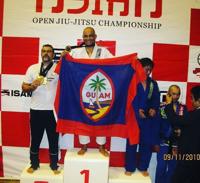 AT HIS BEST: In this 2010 file photo, Guam's Stephen Roberto holds the Guam Flag after placing first in a jiujitsu tournament. Photo courtesy of Stephen Roberto 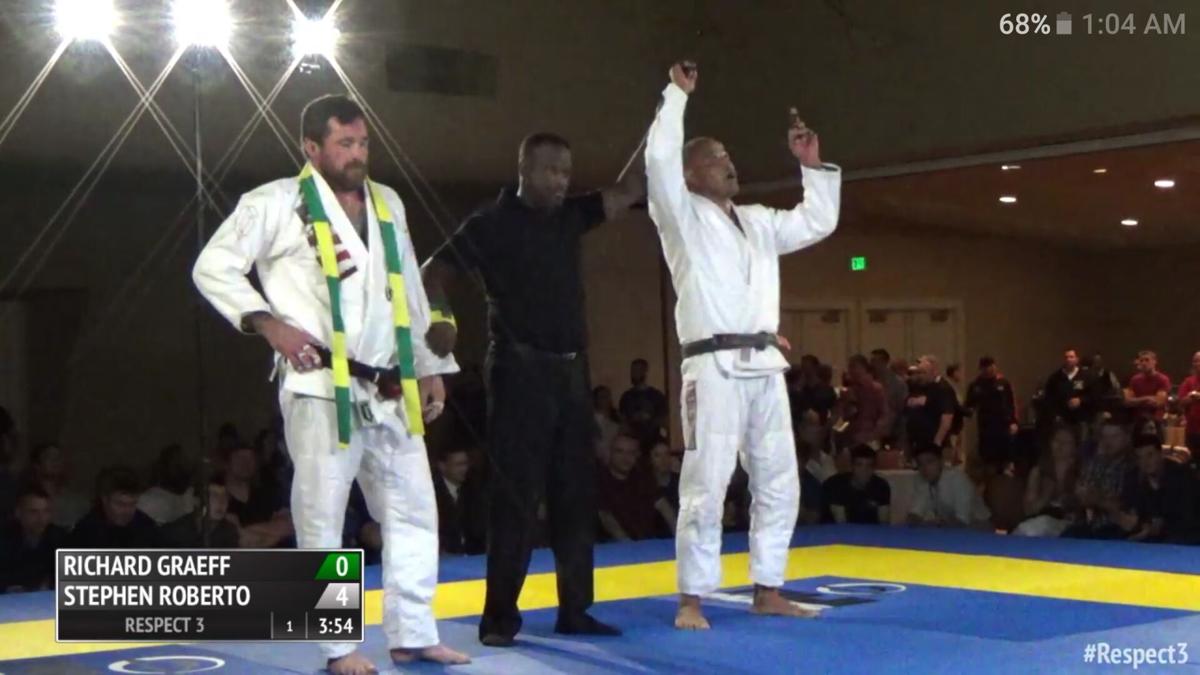 MAT TIME: In this file photo, Stephen Roberto competes in a jiujitsu competition. Roberto is the owner of Purebred Jiu-Jitsu Academy and will be stepping back as head instructor on July 3. Photo courtesy of Stephen Roberto

AT HIS BEST: In this 2010 file photo, Guam's Stephen Roberto holds the Guam Flag after placing first in a jiujitsu tournament. Photo courtesy of Stephen Roberto

After 15 years at the helm, Purebred Jiu-Jitsu Academy owner and head instructor Stephen Roberto will be retiring next month, and while the academy will continue to grow local jiujitsu talent, it will do so under the more-than-capable leadership of black belts Oliver Cruz and David Harris, according to Roberto.

Come July 3, the day before his birthday,Roberto’s retirement will take effect.

“I’ll still have a hand in the business. I’ll still be teaching jiujitsu. I’m not stepping away completely. I’m stepping away from a majority of the responsibilities due to the fact that I will be transitioning to a new career,” he said.

Roberto was instrumental in shaping the jiujitsu community on Guam.

He’d been practicing jiujitsu for 25 years and teaching for the past 22 years.

“At this point in my career, after producing 34 black belts, I’ve got a good crew of guys that are stepping up and ready to lead the academy into this new time,” Roberto said. “I believe the success of a business relies on being able to adjust to the times and by having these younger and fresher minds and eyes on the business it’ll be able to help steer us in the right direction and allow for continued success.”

Around the year 2000, Roberto and his friend Ted Vida took over Purebred Shuto Training Gym Guam, which started in the mid 1990s by John Calvo and Enson Inoue, Roberto said. After Typhoon Chata’an then Supertyphoon Pongsona blew through Guam in 2002, Vida relocated. Roberto stayed on the island to operate Purebred.

“Opening a jiujitsu academy was not really a popular decision. People didn’t understand what I was doing because we didn’t have a cage. We didn’t have a bag,” Roberto recalled. “We weren’t your typical mixed martial arts facility. Our focus was specifically on jiujitsu at a time where there were no jiujitsu schools on the island.”

Roberto remained steadfast in his belief and his vision for the academy. He persisted with Purebred’s new mission, steadily expanding the sport’s footprint over the years.

Roberto opened the school when he had not yet gotten his black belt. He invited all Brazilian jiujitsu instructors he came across when he’d trained off island to check out the growing jiujitsu community in the middle of the Pacific Ocean. Instructors grew curious. They took him up on on his offer and visited the island.

“When the instructors would come and would see the level of jiujitsu and the passion that the students had, they would instantly take note, ‘Man, this place is pretty special, these people are very passionate and we want to help,’” Roberto said.

Instructors would leave the island and rave about their time here, piquing the interest of others, who also flew to Guam. Guam got more attention in the jiujitsu world, Roberto recalled.

Roberto said the sport has exploded in popularity.

“Now there’s so much jiujitsu on Guam, people are able to make money off of it, make a living, and Guam is now recognized as one of the most populated jiujitsu places in the world,” Roberto said.

The athletes have competed in countless competitions and won countless times on the international stage, always waving the Guam Flag.

Locally, as the sport grew in popularity, Roberto’s own journey in jiujitsu skills also broadened.

Not just the body

He said he initially got into jiujitsu with the hope of reaping the physical benefits of the sport. But over time, it became clear that jiujitsu was a tool to strengthen the mind, as well as the body.

“When you think you’re going to quit, you are so far from quitting,” Roberto said. “Jiujitsu gave me the ability to not listen to my body so much rather than to listen to my mind. ... Your mind’s gonna quit way before your body wants to.”

“The other thing, that I think really comes into play during the time of the pandemic, is that jiujitsu teaches you to be very comfortable in the most uncomfortable places and situations,” Roberto added.

These are life lessons he learned through the martial art.

Looking ahead, Roberto is confident about the academy’s new owners’ abilities to lead. He said Purebred will continue to serve the island and provide the highest level of jiujitsu instruction. He said he’s transitioning to his new career and taking care of family obligations, including caring for his mother.

“It’s been tremendous watching Guam be the powerhouse of this particular martial art,” Roberto said. “Everywhere we go, everywhere I travel, people know Guam for its beautiful beaches, its nice people, the great food and the amount of jiujitsu that’s on the island. It’s really great to see Guam being recognized like that in terms of the jiujitsu world.”