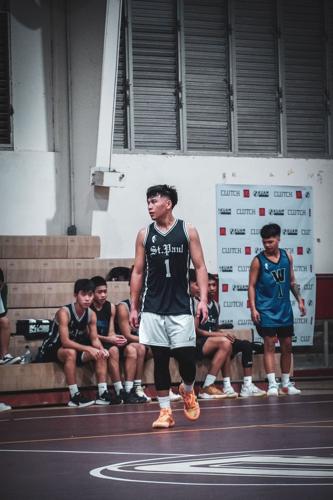 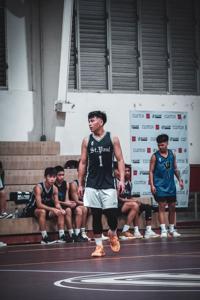 QUINTANILLA: Josiah Quintanilla, a senior guard with the St. Paul Warriors, was named MVP of the McDonald's High School Basketball Classic after dropping 31 points in the championship game Jan. 8, 2022, at the Father Duenas Jungle in Mangilao. Zay Sablan/Clutch Guam 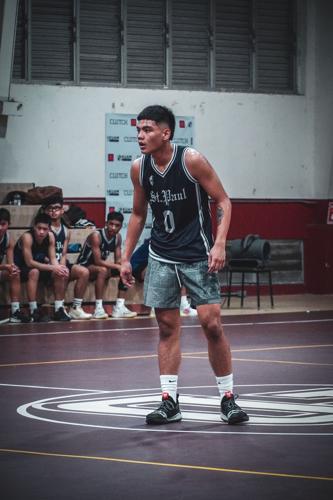 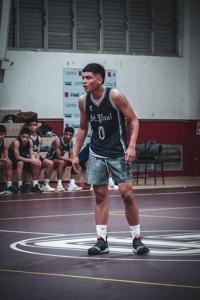 SANCHEZ: Xander Sanchez, a junior forward with the Saint Paul Warriors, was named to the all-tournament team for the McDonald's High School Basketball Classic after the championship game Jan. 8, 2022, at the Father Duenas Jungle in Mangilao. Zay Sablan/Clutch Guam 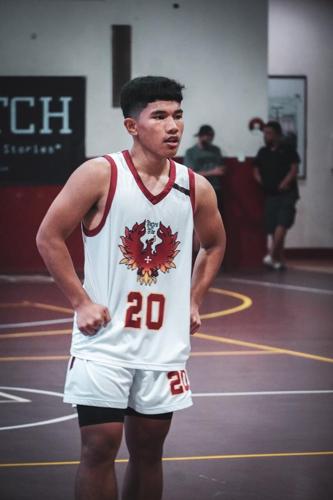 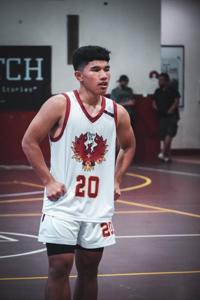 SANTOS: Jaden Santos, a junior guard with the Father Duenas Friars, was named to the all-tournament team for the McDonald's High School Basketball Classic after the championship game Jan. 8, 2022, at the Father Duenas Jungle in Mangilao. Zay Sablan/Clutch Guam

QUINTANILLA: Josiah Quintanilla, a senior guard with the St. Paul Warriors, was named MVP of the McDonald's High School Basketball Classic after dropping 31 points in the championship game Jan. 8, 2022, at the Father Duenas Jungle in Mangilao. Zay Sablan/Clutch Guam

SANCHEZ: Xander Sanchez, a junior forward with the Saint Paul Warriors, was named to the all-tournament team for the McDonald's High School Basketball Classic after the championship game Jan. 8, 2022, at the Father Duenas Jungle in Mangilao. Zay Sablan/Clutch Guam

SANTOS: Jaden Santos, a junior guard with the Father Duenas Friars, was named to the all-tournament team for the McDonald's High School Basketball Classic after the championship game Jan. 8, 2022, at the Father Duenas Jungle in Mangilao. Zay Sablan/Clutch Guam

Editor’s Note: There were six athletes named to the all-tournament team for the McDonald’s High School Basketball Classic, including MVP Josiah Quintanilla. To ensure each athlete is showcased, the boys’ all-tournament story will be split into two parts. Yesterday’s edition featured Tobias Eckles, Kirston Guzman and Jose Saures.

When the St. Paul Christian School Warriors and the John F. Kennedy Islanders duked it out in the championship game of the McDonald’s High School Basketball Classic Jan. 8 at the Father Duenas Jungle, it was a dazzling display of athleticism, skill and sportsmanship.

SPCS’s Josiah Quintanilla was near unstoppable on the court and his teammates found him on every opportunity as they pulled away in the second half to claim the crown. But the three weeks of competition was a hooper’s dream as seven of the island’s high school teams shook off the pandemic blues to showcase their talents on the hardwood.

But, it came down to consistency and how their respective teams finished, said Clutch Guam’s Dominic Sablan.

“As we saw in the tournament, any team may be beaten in any given day and the environment is extremely competitive,” he said. “Although SPCS is now considered the clear-cut favorites, several other teams look great and I’m expecting an action-packed season.”

The all tournament selections were:

Like the rest of the SPCS squad, Quintanilla plays at an unrelenting pace regardless of the score or the opponent. Known for his ability to slice though defenses, the senior added a long-range shot to his arsenal, making it tougher for opponents to guard him. Athletic and fast, Quintanilla was seemingly everywhere in the championship game against the JFK Islanders when he knocked down 31 points.

“My mentality is to give it 110% and sacrifice my body, whether it be to dive for a loose ball or grab rebound/boards and make sure to share the ball and get my team touches,” he said.

After four weeks of preseason basketball, Quintanilla said the focus after every game is on improving mentally and physically.

“Physically, I make sure I am well rested and filled with the appropriate vitamins and nutrients for the next game to perform my best,” he said. “Mentally, I take from the last game on ways I can improve on the next.”

It’s all about the work he puts in and the ability to be a good teammate, he said, adding it’s 110% on both ends of the court and continually communicating with his teammates to ensure everyone is on the same page.

As a leader on the floor, he said, it’s important to “keep the energy up as high as it possibly can, to focus on your game and your skills rather than the scoreboard and self-improvement.”

He readily admits he works on his craft daily, whether it’s putting up shots or watching basketball videos on how to create space.

“One thing I love about the game is that it helps me get through a lot when times aren’t right, I usually go to a court and work on my craft,” he said. “It also helps me mentally and physically, Mentally, it puts me into a state of mind where I can work on myself and has shown me that no matter what I go through, it’s always there for me. Physically, it keeps me in shape and keeps me motivated to reach new goals as a build on my skills.”

His ability to be a good teammate extends to his opponents as well. Often, Quintanilla is the one helping injured athletes off the court, even when they aren’t his teammates.

"It’s more than just a game to me, when I see my brother on the floor, I just do the right thing anyone would do. I pick them up because I know, in the future, they’ll get me right back," he said. "Honestly I just get it from the way my parents raised me – respectful, kindhearted and just to be God's child.

“Something people may not notice about me is that I am a really genuine person. I know it may seem like I am on the court but, in reality I stay humble and I always try to do what’s best for myself and my teammates,” he added.

Intense and unrelenting, Sanchez plays both ends of the court with a huge chip on his shoulder. Taking every game as a battle to be won, Sanchez doesn’t have an off button. His size makes it tough for smaller guards to take him on and his speed makes it easy for him to weave through bigger defenders. But, did we mention he was intense?

“Kill. Dominate. Win,” Sanchez said when asked how he approaches every game. “It’s as simple as knowing and understanding the task at hand and what needs to be done and going out there and executing.”

Confident and brash, Sanchez believes in his team with every fiber of his being.

“Our defense is unmatched, it’s the kind of defense that makes the opposing coach call a timeout and go over how to get by. But we still have a lot to improve and could be more vocal on the court,” he said. “My role on this team is to be a leader and do the necessary things that don’t show up on the stat sheet. We’re deadly in every facet of the game so my role is based on setting the tone for the game.”

It’s a role he embraces, readily admitting he locks in every game. There is no other option, he said.

As an athlete, he said, he embraces the grind and applies the same intensity to every facet of his game, even in practice.

“Honestly, just to stay focused and really lock in, whether it’s at practices, games, or even just a shoot-around. As athletes there’s always something we can improve on,” he said, adding he works on his craft every chance he gets – by himself or with his team.

And, despite all that, Sanchez said, very few people understand what he’s like as a person.

“People may not realize the type of person I truly am. What they see on the court and what I do as an athlete isn’t necessarily who I am as a person off the floor,” he said.

Energy, ferocity and intensity – that’s what Santos brings to the FD lineup. A crafty guard who spots open teammates despite facing taller defenders, Santos is a huge component on the Friar offense. Santos’ speed and abilities as an offensive threat are on full display when teams put pressure on him as he rips through defenses with ease.

“My target is to always get better every day. This tournament made me realize that I need to continue working on basic skills and practicing good habits to improve my game,” he said,

Communication was definitely an issue, he said, adding his goal is to improve his game as well as hone his team’s communication on both ends of the court.

“I believe that this will help us grow together as a team throughout the season,” he said. “My role on the team is to provide a spark and give them the boost to perform every game. Also, provide motivation and support to my teammates no matter the score or situation.”

Santos admits he’s passionate about the sport – working on his craft every day or hitting the weight room to ensure he can handle the physicality of the game.

“I approach every game with the idea of playing hard and understanding that every challenge is different. Showing respect to your teammates and the opponent is important for the game,” he said.

A spark plug on and off the bench, Santos takes pride in his ability to be a better teammate, and push and motivate his team, even when it’s tough.

“People may not realize that I’m a motivator as I don’t show it vocally. However, I show it through my body language and actions on the court,” he said. “I always do my very best to help my team.”

The best part about basketball is the team aspect, he said.

“I love how basketball is a team sport and that one player can't do everything by themselves to win. It’s all about teamwork and working hard as a whole,” he said.