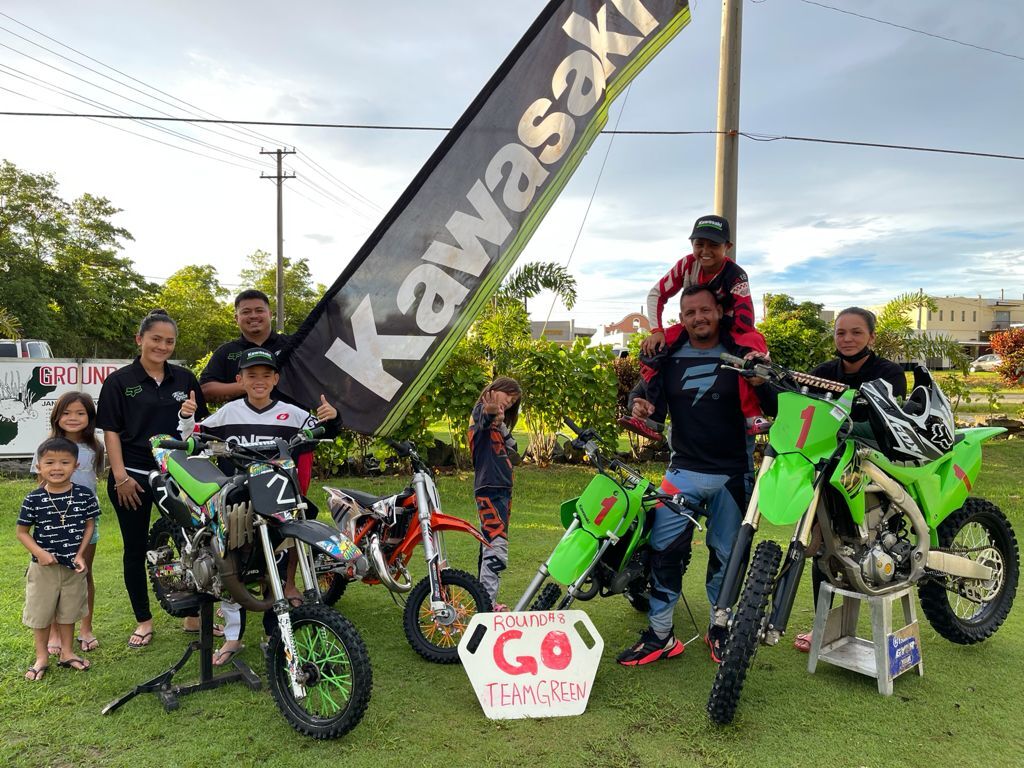 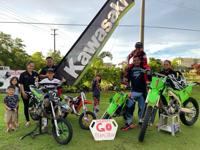 TEAM GREEN KAWASAKI: Johnny Aguon, right, is shown with his family prior to Round 8 of the 2021 Monster Energy Motocross Championship series. Contributed photo 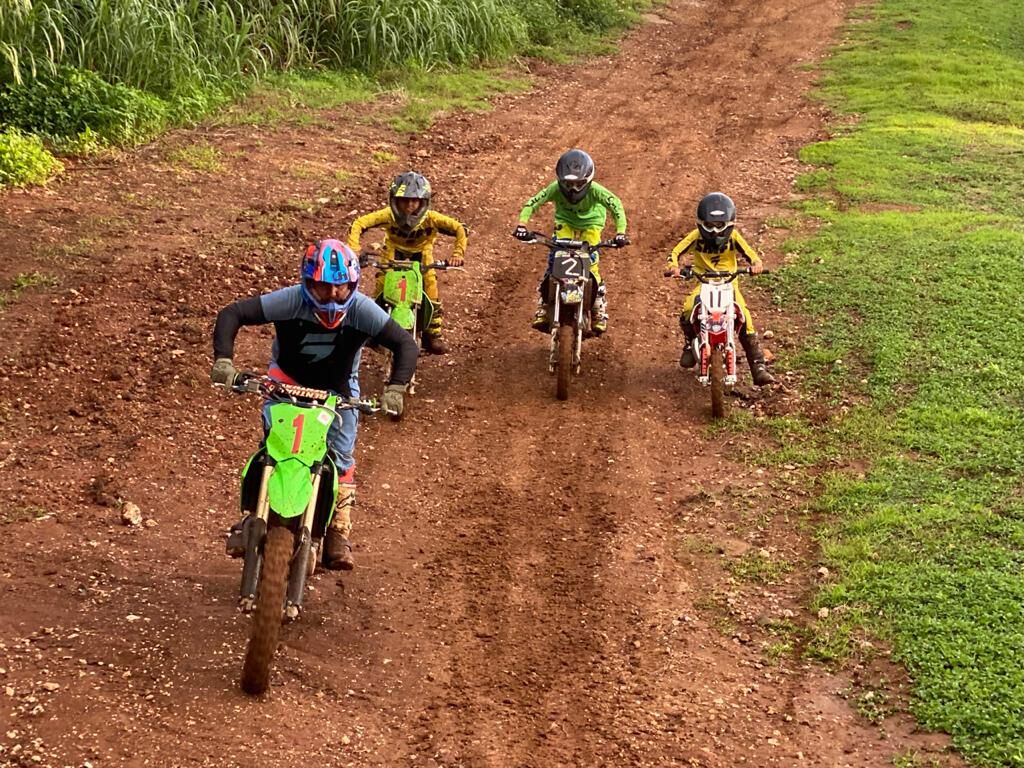 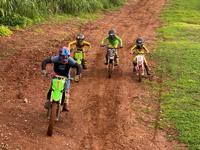 A FAMILY THAT TRAINS TOGETHER: Johnny Aguon, front, is shown with his "tails" – Johnboy Aguon, Alize Mondia and Jeriah Guzman – during a recent training ride. Contributed photo 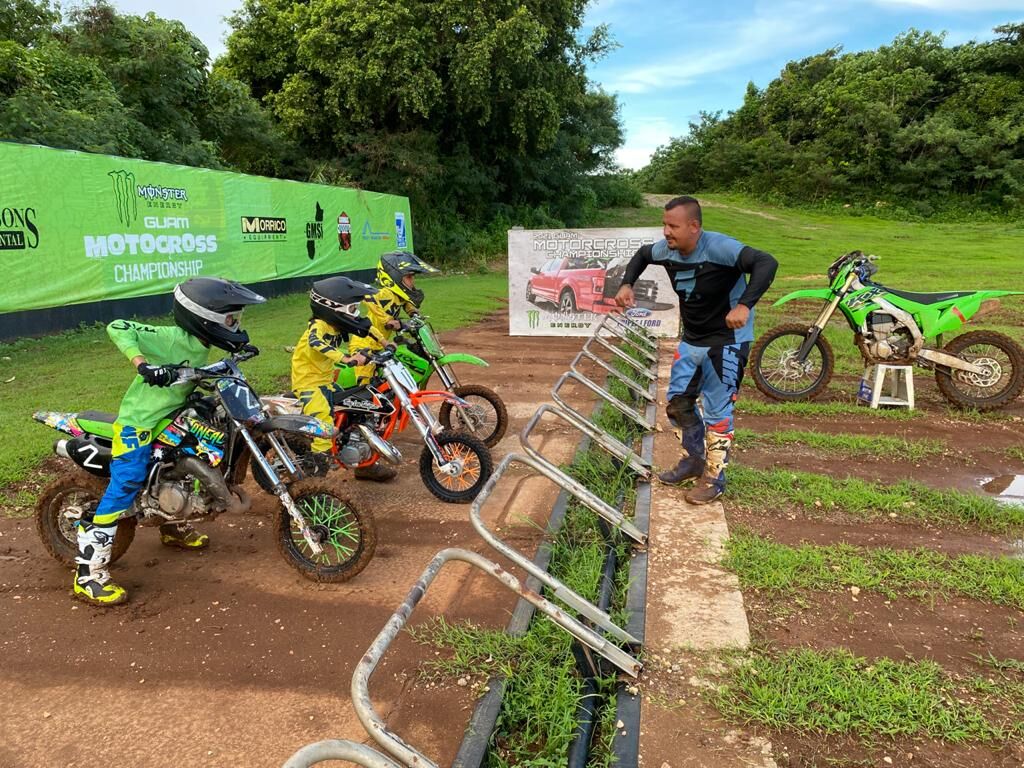 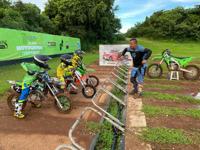 WAITING FOR THE GATES TO DROP: Johnny Aguon, front, is shown with his "tails" – Johnboy Aguon, Alize Mondia and Jeriah Guzman – during a recent training ride. Contributed photo

TRAIN HARD, FIGHT EASY: Johnny Aguon is shown during one of his cross-training runs in preparation for the motocross championships. Contributed photo

TEAM GREEN KAWASAKI: Johnny Aguon, right, is shown with his family prior to Round 8 of the 2021 Monster Energy Motocross Championship series. Contributed photo

A FAMILY THAT TRAINS TOGETHER: Johnny Aguon, front, is shown with his "tails" – Johnboy Aguon, Alize Mondia and Jeriah Guzman – during a recent training ride. Contributed photo

WAITING FOR THE GATES TO DROP: Johnny Aguon, front, is shown with his "tails" – Johnboy Aguon, Alize Mondia and Jeriah Guzman – during a recent training ride. Contributed photo

TRAIN HARD, FIGHT EASY: Johnny Aguon is shown during one of his cross-training runs in preparation for the motocross championships. Contributed photo

For motocross champion Johnny Aguon, competition and racing fuel every aspect of his life.

Sitting atop the standings and the defending 450cc champion, Aguon knows the target on his back gets larger every race.

“Being the king of the crown is not just a walk in the park. You gotta eat it. You gotta sleep on it. Most importantly, you gotta be obsessed with it,” he said. “I am currently the 450cc champion and the overall points leader. And, there’s no putting your guards down.”

The rush of blood-pumping competition, the roar of the engines and the sound of the gates dropping are the stuff of dreams, he said.

“The blood is flowing and the tension is on,” he said. “I look back at all the time that I’ve scarified and all the time in training for that one very moment.”

Confident, hungry and brash, Aguon backs up his fire with grueling hours of racing practice and an insane fitness regimen. “Train hard, fight easy,” he says, describing what it takes to stay atop a competitive field.

His workout the week prior to Round 8 of the Monster Energy Motocross Championships last month was not for the faint of heart.

“I believe the way you train is the way you’re gonna fight, therefore, I push my limits,” he said.

The week prior to Round 8, he completed a six-mile mud challenge. Then pulled a five-miler the next day to test his ability to stay focused after a rough run. One day before competition, he put together a terrain run that spanned close to six miles of mud, hills and rocks. All of this is in addition to runs on the bike, honing his craft.

Pushing through physical barriers forces him to challenge his mental limits, he says.

“Not only does it take a toll on my mind and body, but my soul of learning how to a champion comes in to check as well,” he said.

Aguon is realistic. The grind is hard, but he knows his labors will bear fruit. But, sometimes, people lose, Aguon said, and part of being a champion means fighting back after a loss.

“Being in the spotlight of a champion comes with big responsibilities, and those responsibilities include asking yourself, ‘When you fall, are you gonna get back up?,” he asked. “If you get defeated, are you willing to accept the loss and push harder?”

Talking to Aguon, it’s easy to see the intensity that comes with being a champion. But, while winning and being No. 1 is always a motivation, Aguon continually lives by his principles because it’s what “his tails” expect.

His son and daughter – Johnboy Aguon and Jeriah Guzman – and nephew – Alize Mondia – keep him focused, almost laser like, on the finish line.

“These tails that follow me don’t know any better, but to listen to the knowledge of a champion and that my destiny and goal of being a champion,” he said.

And, the tails are listening, applying everything they learn in every race they put up.

Johnboy Aguon is the reigning 65cc champion, owning a perfect scoreboard. Alize Mondia is in second place on the 65cc scoreboard and Jeriah Guzman is the current 50cc points leader.

“The tails that follow a champion become champions themselves,” he said.

Jon Aguon said he’s blessed to have a family that loves the sport as much as he does.

The elder Aguon said he always takes time out for the kids, ensuring they put in just as much time on runs and practice rides to hone their love for the sport. Extremely proud, Aguon shares all that the family has done to put their best foot forward every race.

“When I go out for daily practice, it’s not just me,” he said. “I got tails that follow me, which is a bigger responsibility.”

More than training, Aguon puts his time, money and effort towards the kids – acknowledging they are the most important part of this journey.

The kids keep him in check, he said, adding “I’m willing to do what it takes to be a champion for the little tails that believe in me.”

“My biggest advice to anyone and everyone out there in the world, if you want something, ‘Go, get it!,’” he said. “Stay focused and check your mindset.”

At the end of the day, there’s no excuses, he said, adding the goal is always to train and get stronger for another day.

“I’m a father. I’m a dirt bike mechanic. I’m a motoX trainer. I’m a race volunteer. I’m the No. 1 supporter for all the tails and supporters that believe in the process,” he said.

While his work ethic is a huge part of his success, he also thanked those who made the journey possible.

“Biggest shoutouts - I would like to thank Cycles Plus for believing in me and any family and accepting us to be a part of Team Green Kawasaki and Ground Tech Maintenance for the support through the journey,” he said.

Thank you, he said, to the local athletes who continually support and train to promote the sport’s growth.

“And to all the family and friends that believe in us, thank you!,” he said.

And, for those wondering if Aguon ever plans to slow down, he just laughed.

“As long as there’s air to breathe, I’m willing to do what it takes to be a champion and for the little tails that believe in me,” he said.

To the government of Guam's credit, the island has achieved one of the highest COVID-19 vaccination rates in the entire country. Read more