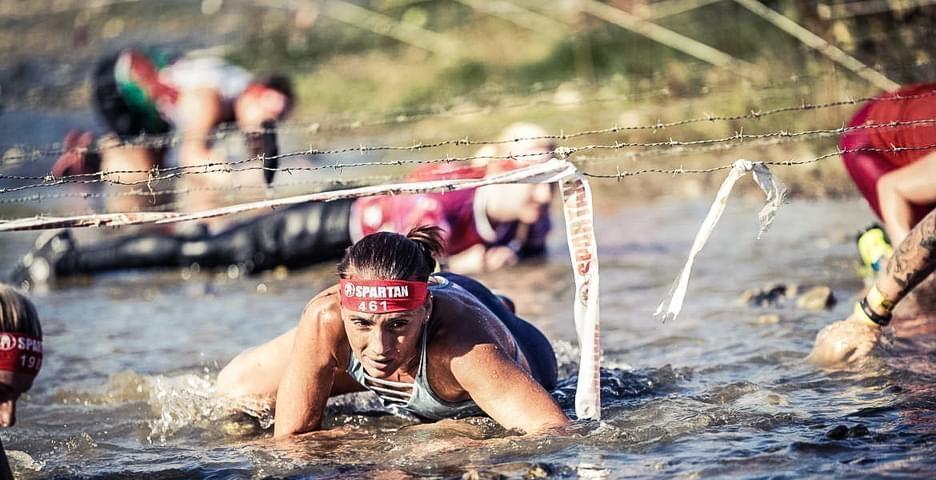 PAIN ALL AROUND: Sharon Hawley climbs under barbed wire in a creek during the Sparta Trifecta World Championship 2022. The three-day competition was held Nov. 4-6, 2022, in Sparta, Greece. Photo courtesy of Sharon Hawley 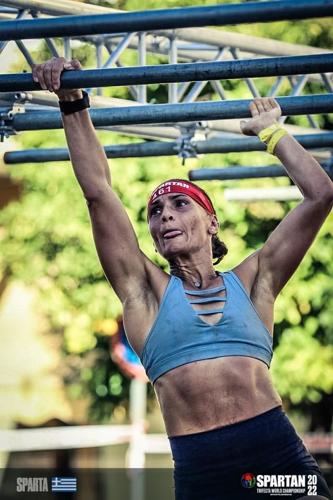 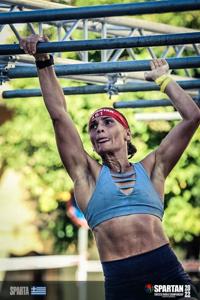 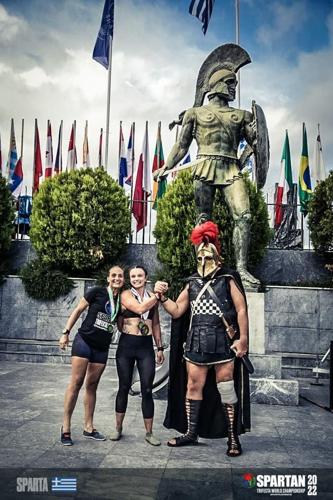 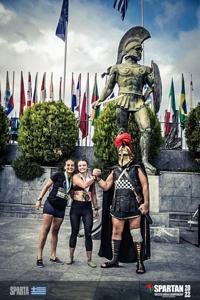 ROLAND AND HAWLEY: Tiela Roland, left, and Sharon Hawley stand next to a mascot at the Sparta Trifecta World Championship 2022. The three-day competition was held Nov. 4-6, 2022, in Sparta, Greece. Photo courtesy of Sharon Hawley

HEAVYWEIGHTS: Tiela Roland, left, and Sharon Hawley pose with their medals in front of the Acropolis in Athens, Greece. The pair competed in the Sparta Trifecta World Championship 2022 in Sparta, Greece. The three-day competition was held Nov. 4-6, 2022. Photo courtesy of Sharon Hawley 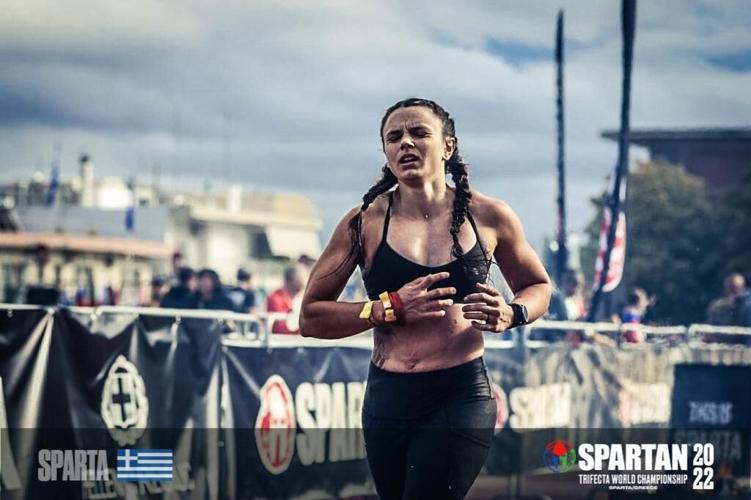 PAIN ALL AROUND: Sharon Hawley climbs under barbed wire in a creek during the Sparta Trifecta World Championship 2022. The three-day competition was held Nov. 4-6, 2022, in Sparta, Greece. Photo courtesy of Sharon Hawley

ROLAND AND HAWLEY: Tiela Roland, left, and Sharon Hawley stand next to a mascot at the Sparta Trifecta World Championship 2022. The three-day competition was held Nov. 4-6, 2022, in Sparta, Greece. Photo courtesy of Sharon Hawley

HEAVYWEIGHTS: Tiela Roland, left, and Sharon Hawley pose with their medals in front of the Acropolis in Athens, Greece. The pair competed in the Sparta Trifecta World Championship 2022 in Sparta, Greece. The three-day competition was held Nov. 4-6, 2022. Photo courtesy of Sharon Hawley

During the intense, imaginative obstacle course races, Hawley and Roland competed against the best athletes in the world, earning spots on the podium all three days. Hawley, who competed in the Female 35-39 division, in 1 hour, 34 minutes, 48 seconds, won the Sparta Super 10K 2022. With a gold medal draped around her neck, she proved to herself and the competition that she was the best in the world.

"Winning comes with respect from the Spartan community,” Hawley said. “Many people give congratulations, but only other Spartans know how hard it is to place, that feeling of defeat, the feeling of pushing it beyond limits you thought you were already good at and the feeling of conquering the challenges.”

On Day 1, which pitted athletes against each other in the Sparta Sprint 5K 2022, Hawley, in 57:13, delivered a silver-medal performance, a mere 11 seconds from capturing gold. She described the course as obstacle-heavy, filled with some of her weakest disciplines.

“The obstacles are what can make or break me,” she said.

“If you miss one — 30 burpees,” said Hawley of the time-stealing, energy-zapping penalty system. “It doesn’t matter how fast you are, someone can then pass you.”

Achieving a second-place and then a first-place finish, Hawley entered Day 3 beaming with confidence. With one more race remaining, the Sparta Beast 21K 2022, she drew on early experiences which allowed her to shred through the course in 3:33:35.

The previous day, Ape Hanger, one of the challenges, got the best of her. But in the Beast, Hawley tamed the ape, a mettle-testing trial consisting of a rope climb and monkey bars.

“I knew I could do it, but it took everything I had,” she said. “Day 2, I failed it, one bar from the finish. Day 3, I switched techniques and breezed across. Crazy, I got it on the day everything was wet! It felt amazing to conquer it!”

Not only was Tiela Roland shocked at making all three podiums, two third-place finishes followed by a second-placer, she was pleasantly surprised at how well her body responded. About a year ago, she underwent shoulder reconstruction surgery, which worried her throughout the competition.

“I didn’t have the expectation of being a part of the top athletes in my age group, especially since I had surgery on my shoulder less than a year ago,” Roland said. "I just came to do my best and have fun, so I was pleasantly surprised.”

Some of the obstacles had athletes climbing ropes, crawling through barbed wire-topped creeks and running through burning coals, but Roland said her greatest challenge, besides believing her shoulder wouldn’t fall apart, was the Beater, a diabolically-twisted set of monkey bars, suspended several feet from the ground.

“I was terrified of this obstacle because it was an obstacle that would’ve previously dislocated my shoulder before I had surgery,” she said. "Plus it was knocking out my competitors left and right.”

Part of Roland’s mind pleaded with her to bypass the challenge and take the penalty. But her competitive spirit won the battle of a split mind, urging her to push through and endure the pain.

“Taking it carefully and listening to how my shoulder felt, I was astonished at how well my shoulder did,” Roland said. “When I conquered the obstacle, I was almost in tears. I remember seeing Sharon racing across one of the mountain tops shortly after I conquered it and I yelled, telling her that I made it!”

Hawley told The Guam Daily Post that seeing her friend succeed was her own proudest moment — not winning a world championship event, but seeing Roland conquer her fear.

“My favorite was seeing Tiela become more confident,” Hawley said. “She and I have trained together and she has made me a stronger athlete. But since her recovery, I have been waiting for her to believe in herself again, and she did. That made my heart happy to see.”

With fear in check and physical exhaustion at a manageable level, Roland’s newfound belief in herself paid dividends, allowing her to record her best finish in the Trifecta. Roland, in 3:51:15, controlled her anxiety and by doing so, slayed the Beast.

“Knowing everyone was probably feeling the same as me made me want to challenge myself and show that I had the ability to dig deeper and push harder, even though my body was physically exhausted,” she said. “Doing so allowed me to finish 15 minutes ahead of my next competitor. This not only secured my spot in second place for the Beast, but it also bumped up my ranking to second for the combined time of all three races.”

Roland shared that competing in the Sparta World Championships was the most amazing race experience she ever had.

“Every person raced their hearts out, and the best part was how the community uplifted one another,” she said.

“Without them, we would have never gotten the opportunity to represent Guam at the Sparta Trifecta World Championship in Sparta, Greece,” Roland said. “I’d also like to thank the two gyms I go to (that) challenge me every day to be in the best shape possible: Urban Fitness and Steel Athletics. Lastly, I’d like to thank my amazingly supportive fiance, Isaiah Cristobal.”