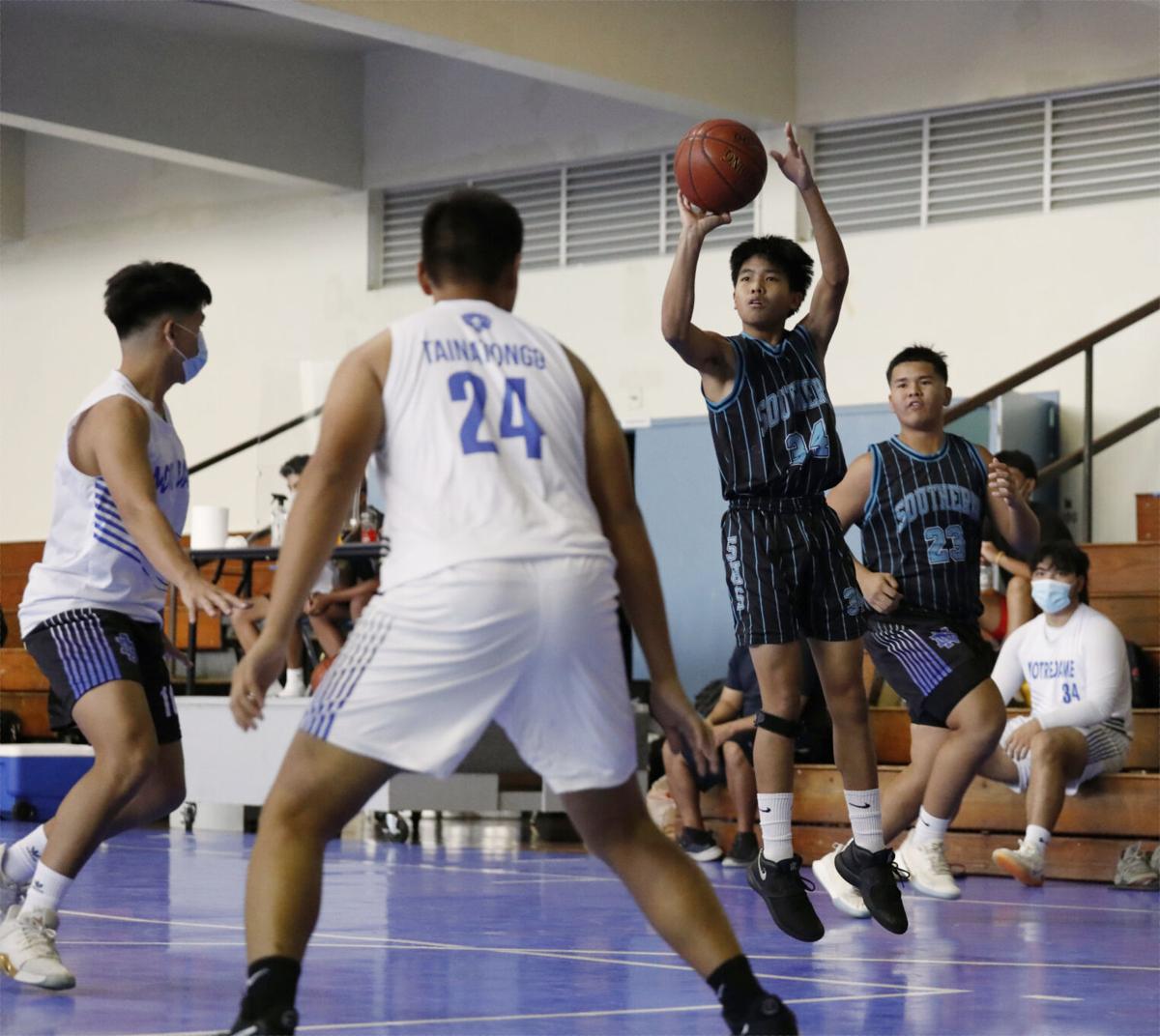 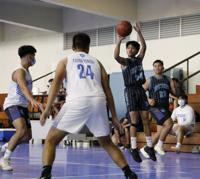 22 SHOOTER: The Southern High School Dolphins' Danny Quinata pulls up for two of his game-high 22 points during a 66-62 overtime win against the Notre Dame High School Royals Monday, May 11, in Talofofo. Matt Weiss/The Guam Daily Post 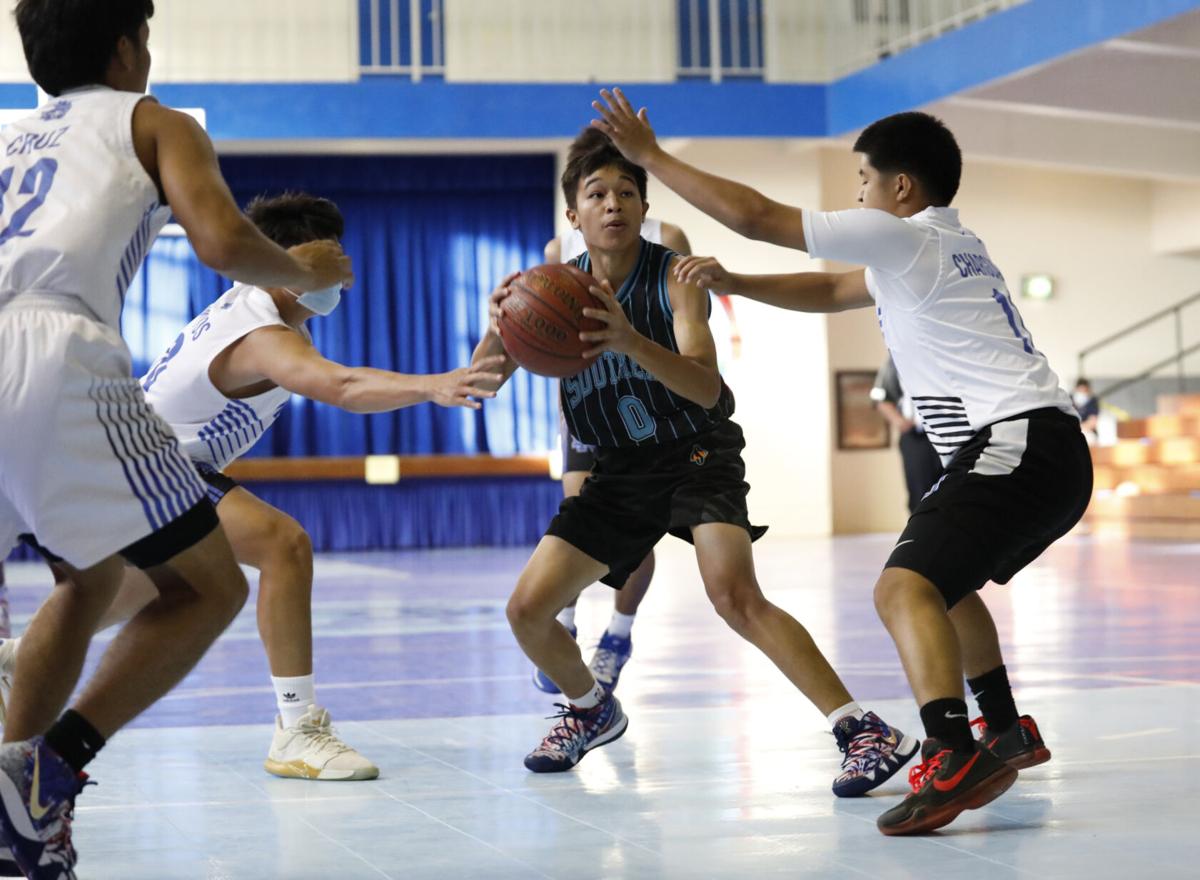 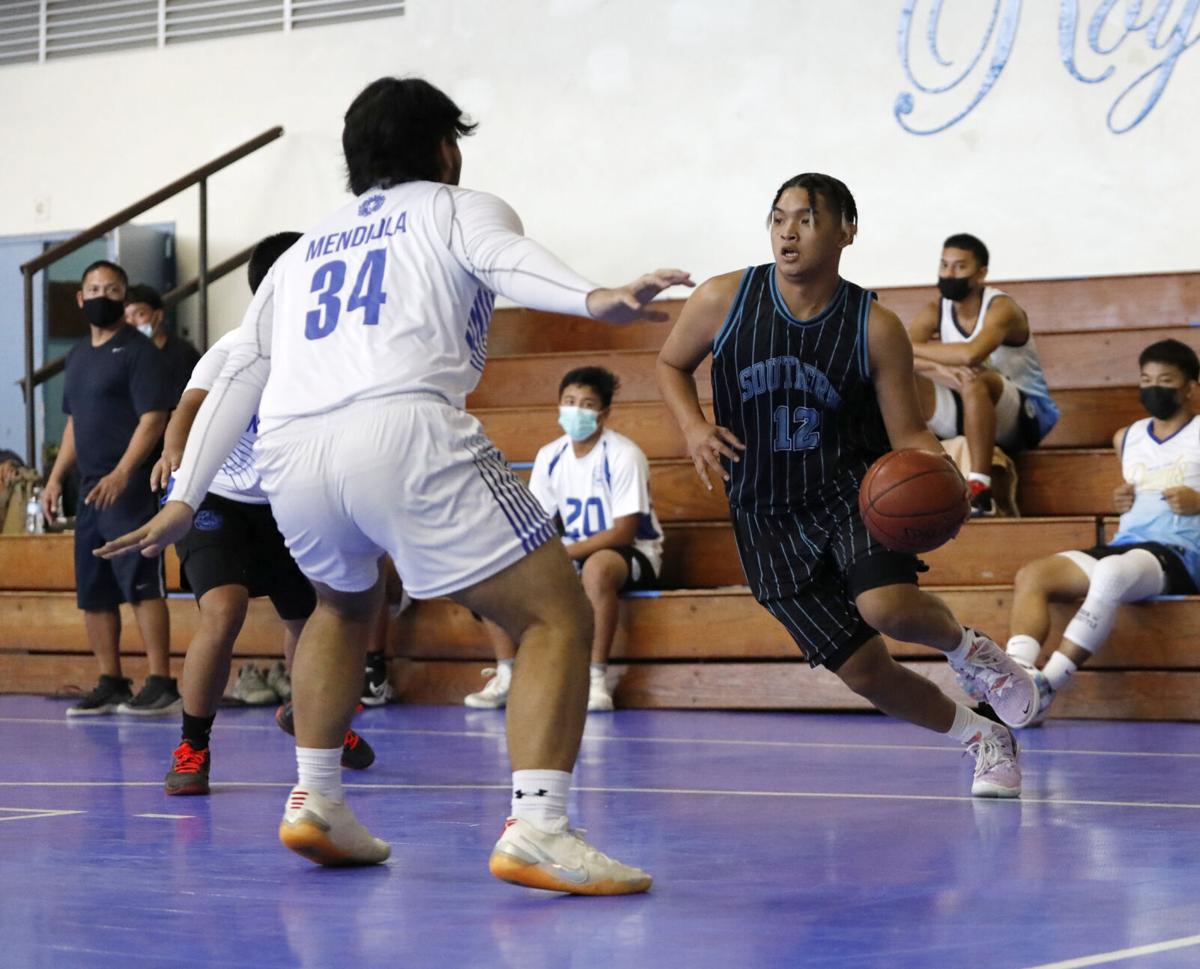 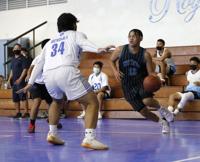 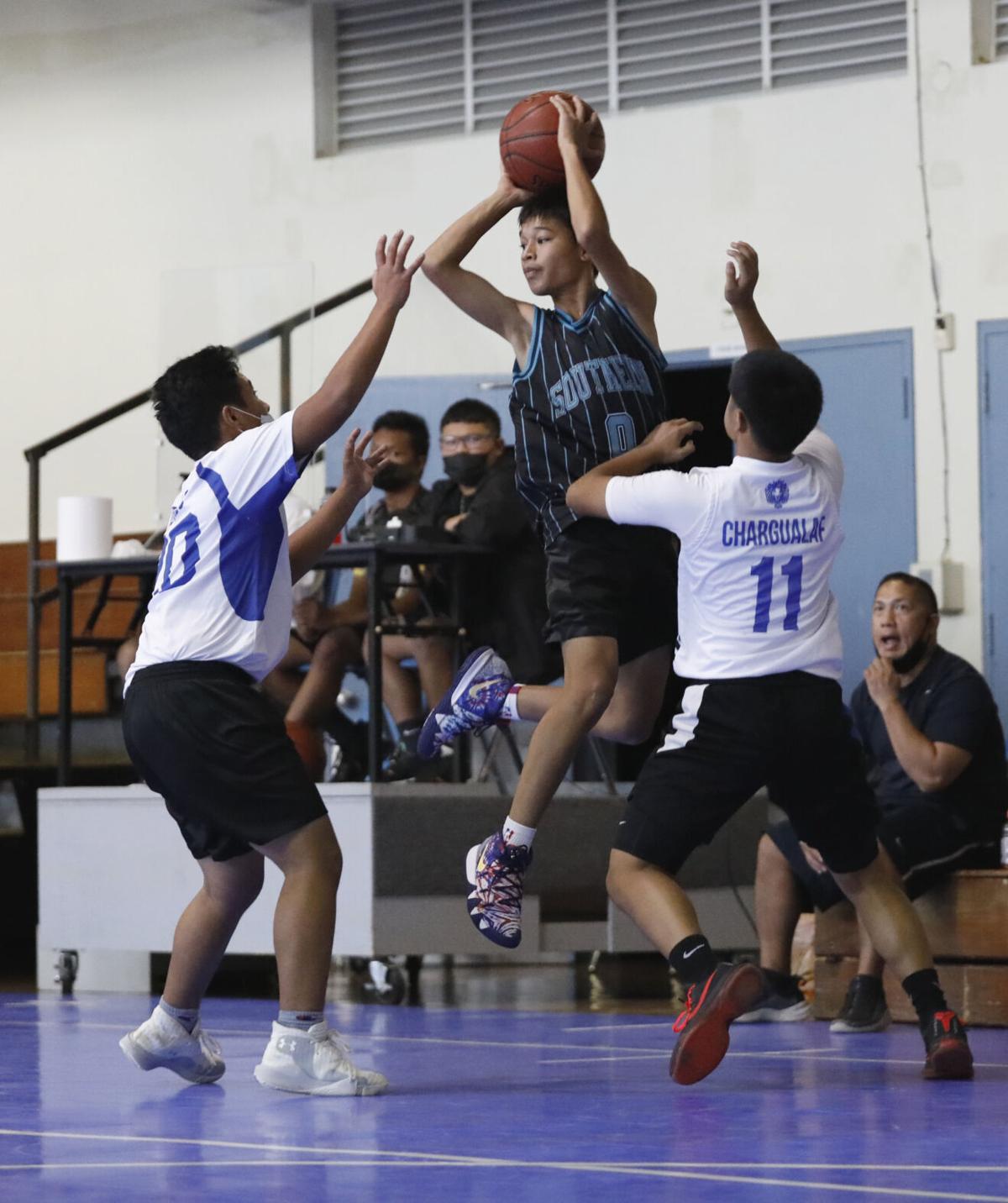 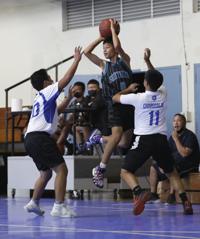 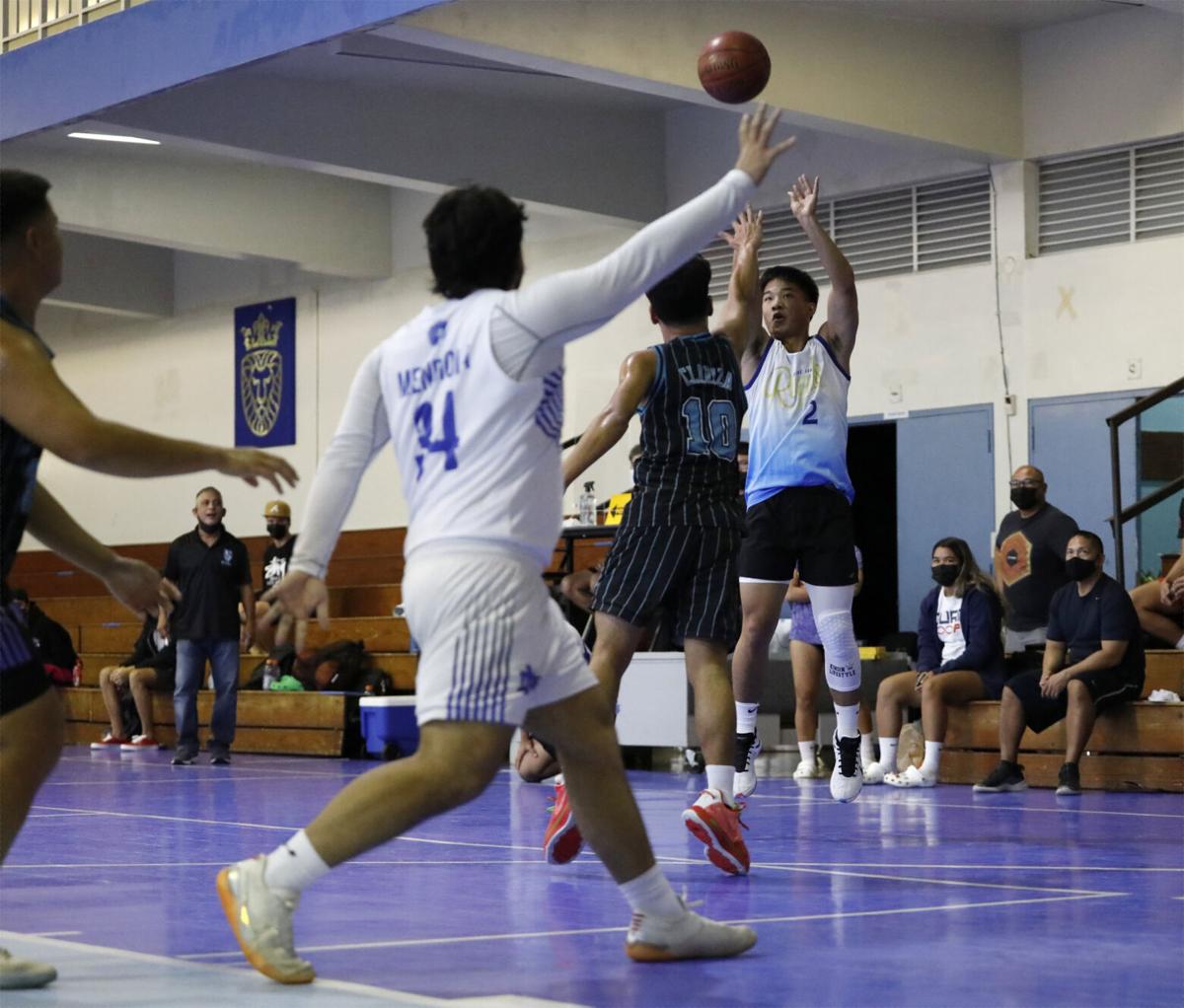 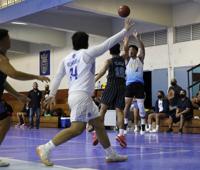 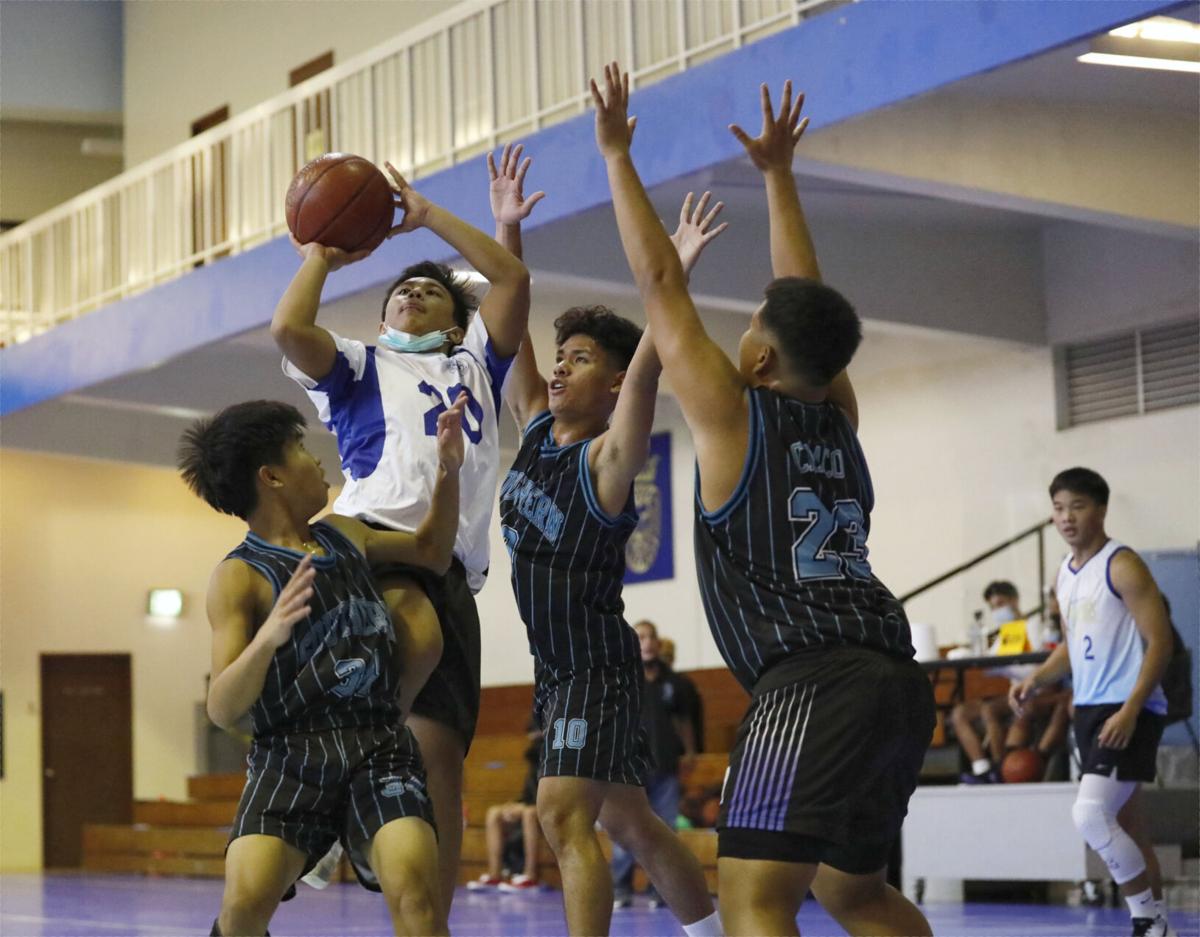 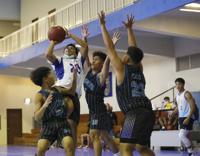 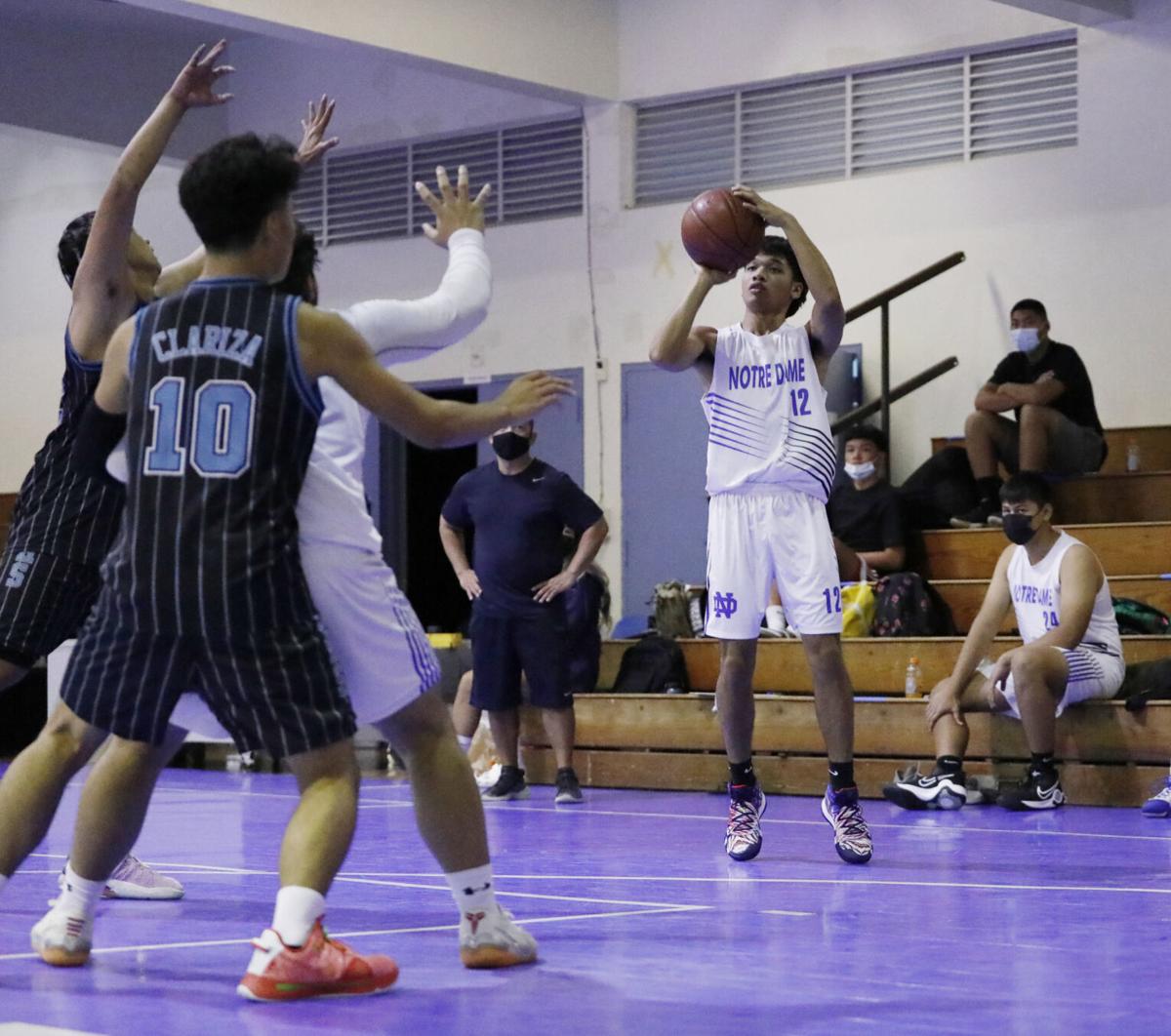 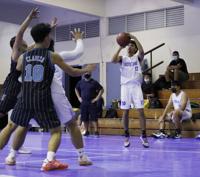 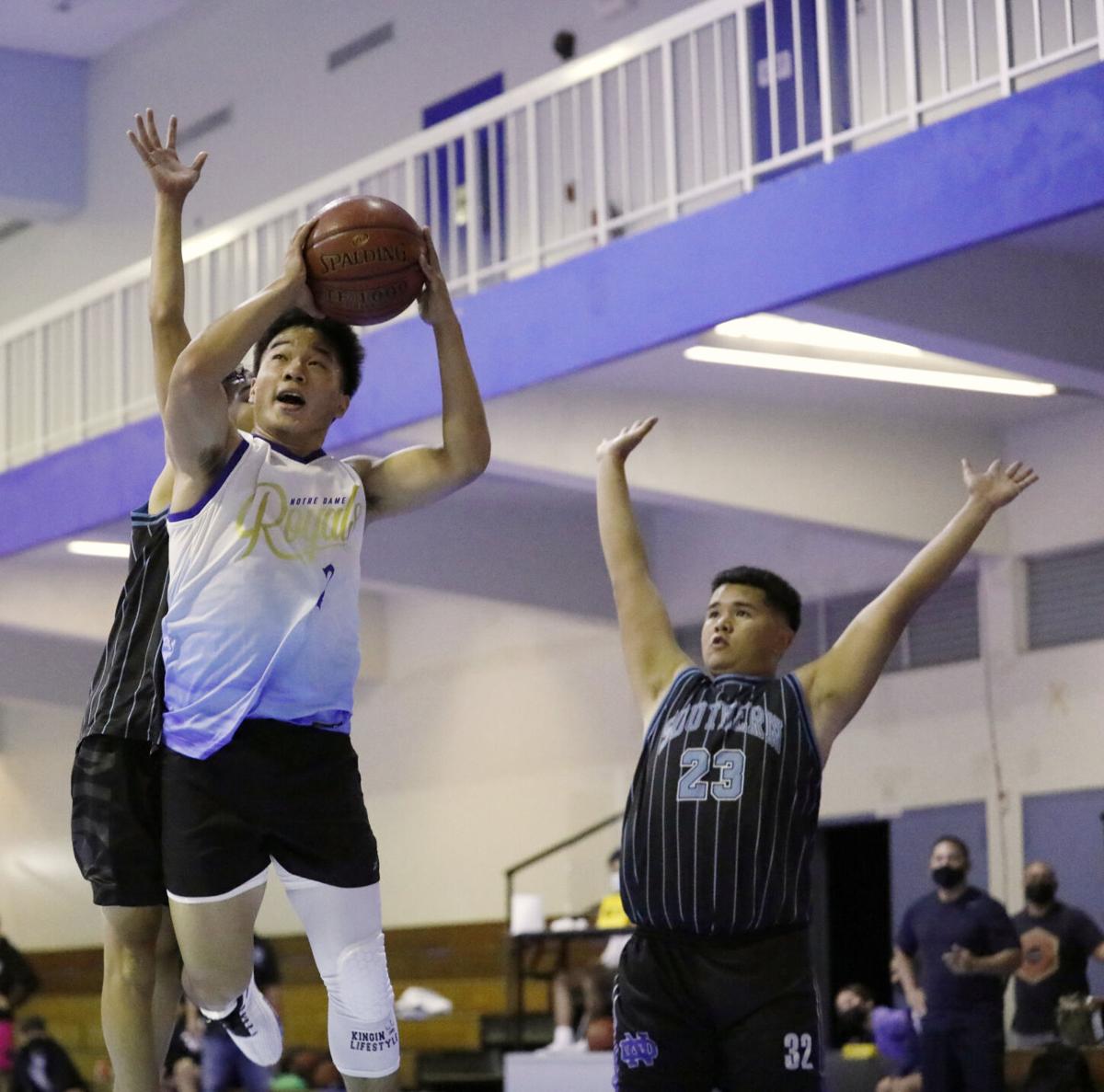 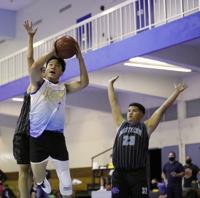 22 SHOOTER: The Southern High School Dolphins' Danny Quinata pulls up for two of his game-high 22 points during a 66-62 overtime win against the Notre Dame High School Royals Monday, May 11, in Talofofo. Matt Weiss/The Guam Daily Post

For the first three games of the Guam Department of Education Interscholastic Sports Association boys basketball season, the Southern High School Dolphins had only suited up five players. On Monday, still with the same five players, the visiting Dolphins gutted out a 66-62 overtime win against the Notre Dame High School Royals.

Despite the low numbers, which are expected to increase for Wednesday’s home game against the St. Paul Christian School Warriors, the Dolphins had high output from all five starter-finishers.

“Everybody contributed to this game, and I’m glad we got the dub.”

Southern’s Danny Quinata, who rotated off and on between shooting and point guard, scored 17 of his game-high 22 points in the first half. Kyler Aflleje, who spent the game battling ND in the paint and dropping mid-range jump shots, finished with 19 points. Brennan Cruz, with 14 points, provided timely scoring and determined defense, including a momentum-stealing block on ND’s Shawn Lamparero.

With several lead changes and scoring runs, momentum shifted back and fourth, never staying with one team for more than a few minutes. After Southern scored the first four points, ND scored the next 11 points, including two 3-pointers from Bryce Chargualaf. The ND sharpshooter scored all eight of his points in the period.

“They’re always making sure I’m on top of my game, complimenting me every now and then, and it gets me going,” Quinata said. “They said, ‘Keep shooting. Keep shooting. You’re heating up.’”

For the first half, ND seemed content on taking most of their shots from beyond the arc. But with a low shooting percentage and the determined Dolphins scoring from short, mid and long range, Southern stole the lead. At halftime, the Dolphins led 31-24.

For the first 16 minutes, ND’s Branden Cruz was held to three points. But in the third quarter, the shots that had not been falling started to fall. In less than a minute, the 3-point specialist converted back-to-back shots from deep. After scoring the Royals’ first eight points, Southern High head coach Dean Castro called a timeout.

With the clock running out and trailing by two points, Lamparero threw a no-look bounce pass through the key to Kevin Tainatongo, who made the uncontested – game-tying – layup.

In the closing minutes of the fourth quarter, after ND's Nolan Sablan made a steal and converted a fast break layup, the Royals led 56-51.

But unable to contain the Dolphins’ shooters, Brennan Cruz drained a 3-pointer.

Tied at 56-all, Brennan Cruz had a chance for the win, but a deep 3-point shot barely drew iron. The rebound fell to Southern, but another buzzer-beating attempt was off the mark.

In the four-minute overtime period, seven different players scored, but Southern had outscored the Royals 10-6.

“Everybody contributed to this game, and I’m glad we got the dub,” Aflleje said.