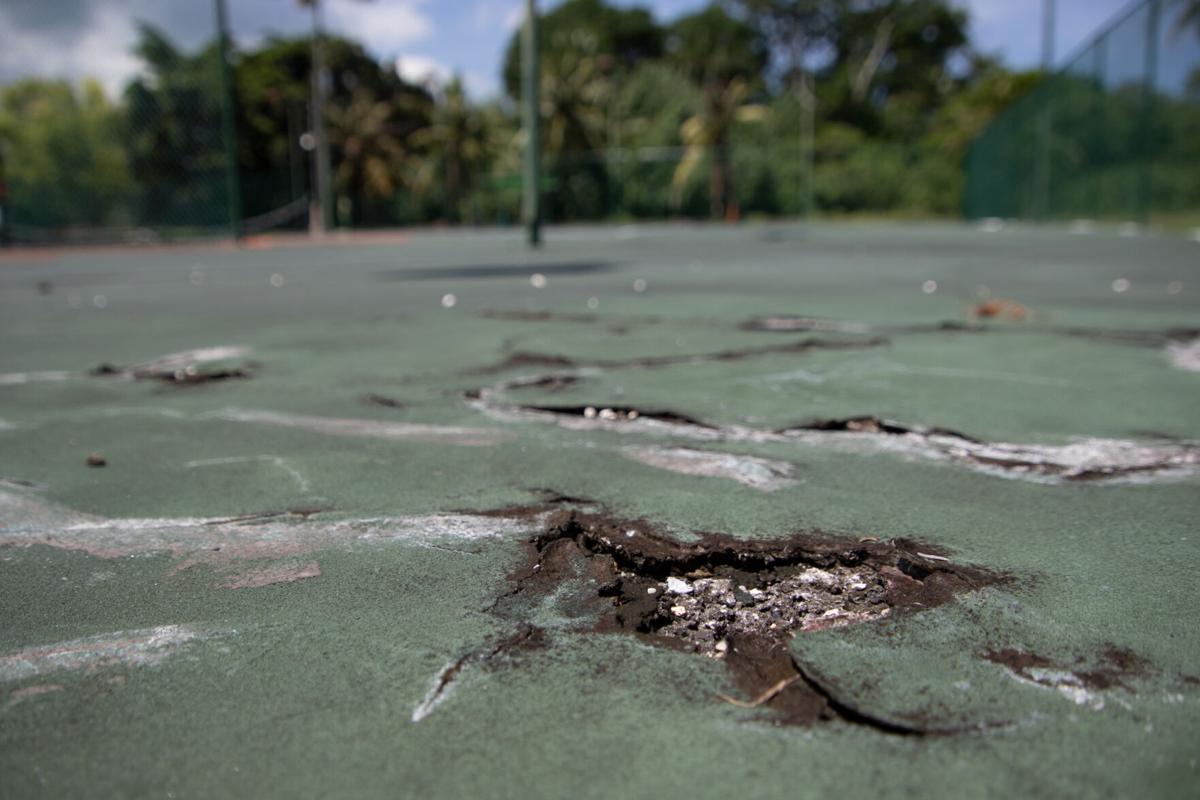 CRACKED: As Gov. Lou Leon Guerrero eased restrictions and allowed tennis and some other noncontact sports to resume at noon on Friday, the Rick Ninete Tennis Center has been reopened but will close in about four weeks for resurfacing. Matt Weiss/The Guam Daily Post 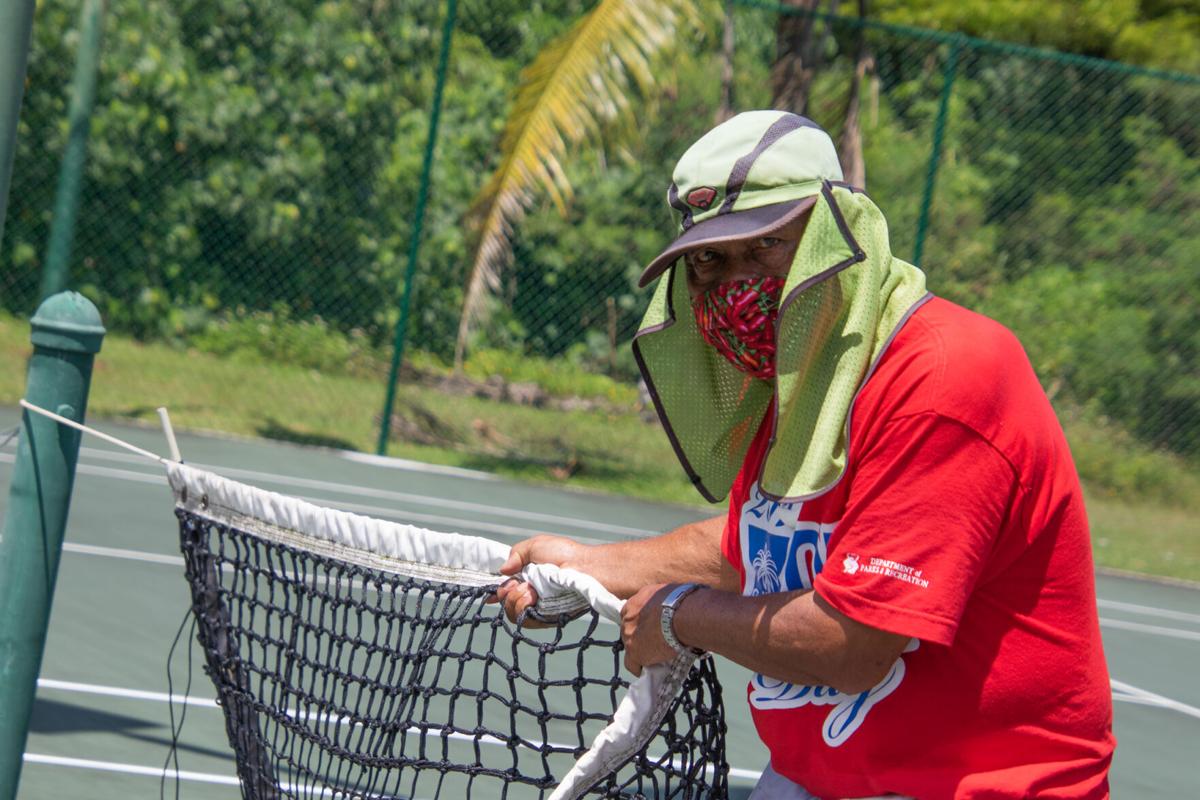 NET RESULTS: Rick Ninete puts up a net at the Ninete Tennis Center on Friday. Amid PCOR1, tennis has been given the green light to resume but the Hagåtña-based facility will soon close for resurfacing. Matt Weiss/The Guam Daily Post

CRACKED: As Gov. Lou Leon Guerrero eased restrictions and allowed tennis and some other noncontact sports to resume at noon on Friday, the Rick Ninete Tennis Center has been reopened but will close in about four weeks for resurfacing. Matt Weiss/The Guam Daily Post

NET RESULTS: Rick Ninete puts up a net at the Ninete Tennis Center on Friday. Amid PCOR1, tennis has been given the green light to resume but the Hagåtña-based facility will soon close for resurfacing. Matt Weiss/The Guam Daily Post

When Gov. Lou Leon Guerrero eased restrictions last Thursday and allowed tennis and some other noncontact sports to resume, several sports enthusiasts in the community felt a long overdue sense of relief.

As soon as word got out that tennis could resume as early as noon, Friday, bookings were made, courts readied, and some sense of normality had been restored.

“Good to be a citizen of Guam, protected, and respected,” said 62-year-old Arn Salas Diaz, who had become disillusioned as she put on a couple extra pounds due to not being able to play during the coronavirus-inspired public health emergency. “Some balance in daily life has been restored in opening up sports facilities on Guam for the active manåmko'.

“‘Thanks, governor, and Pandemic Condition of Readiness committee,’” she beamed.

“The pandemic has had a major effect on Guam tennis,” he said. “Same as all sports, we have had to cancel local, regional, and international events.

“It is a very sad situation for the world, but we are confident we will come back bigger and better in time.”

As the GNTC, Tamuning public tennis courts, and Rick Ninete Tennis Center started to see action, the Hagåtña-based facility’s return to action will be short-lived.

In about six weeks, the RNTC will close for resurfacing.

"The contractor (Triple K Construction) ordered the material, it won’t be here for - maybe - about a month,” said Roque Alcantara, the director of the Department of Parks and Recreation. “It’s going to be just about two weeks for the contractor to complete the work. If the material comes in early, then we’ll have to coordinate with Rick Ninete.”

All the cracks and everything are going to be repaired, and it’s going to be resurfaced the same as the one up at Northern Sports Complex, he added.

As Ninete prepared for the first arrivals, the 77-year-old had begun installing nets and  blowing rocks off the courts that were left by the contractor.

On Aug. 16, when Leon Guerrero downgraded Guam from PCOR3 to PCOR 1, DPR ordered Ninete to remove the nets, only to be reinstalled five weeks later.

“I’m going to do it by myself, I’ve done it before,” Ninete said. “The thing that I’m worried about is, a lot of the posts are corroded, rusted.”

Alcantara told The Guam Daily Post that replacing the posts was not part of the contract, but they will still be replaced.

“They’re all being replaced,” he said. “The contract did not include those, it was only for the exterior fences.”

Over the past 35 years, Ninete recalled that the courts in Hagåtña have been resurfaced three times and this will be the fourth. Each time, within a few months of completion, the cracks came back.

Ninete said that he asked for the courts to be leveled with four inches of concrete before resurfacing.

Alcantara, who took over DPR’s directorship after the contract had already issued, said leveling the courts is not in the scope of the contract.

“The management neglected me because they think they know everything,” Ninete said.

In the past, two to three months after the surface is done, the same cracks appear over and over again, Ninete said.

“This is the fourth time since I have been on island that they have been resurfaced, and all the same cracks come up, the same problem.

A lot of times, the decisions are made by people sitting at desks, he added.

Since mid-August, unable to play or teach, Ninete had been walking around the facility’s parking lot and picking up trash.

“Almost every morning, I make my rounds to clean up and make it look better, so, when you come in, you’re in a nice, clean facility,” he said.

“Good to be a citizen of Guam, protected, and respected.” Arn Salas Diaz, tennis player