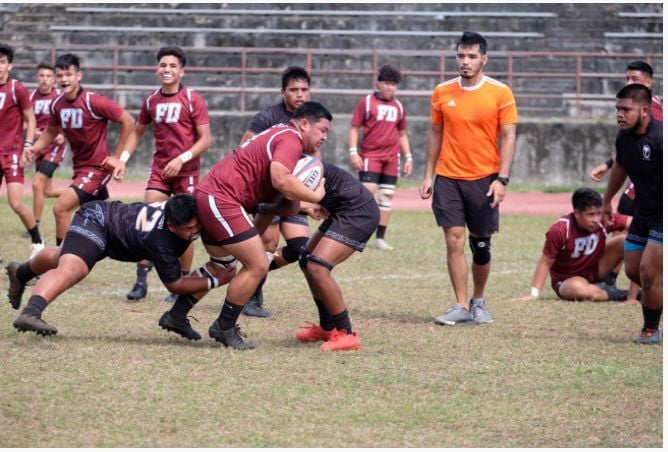 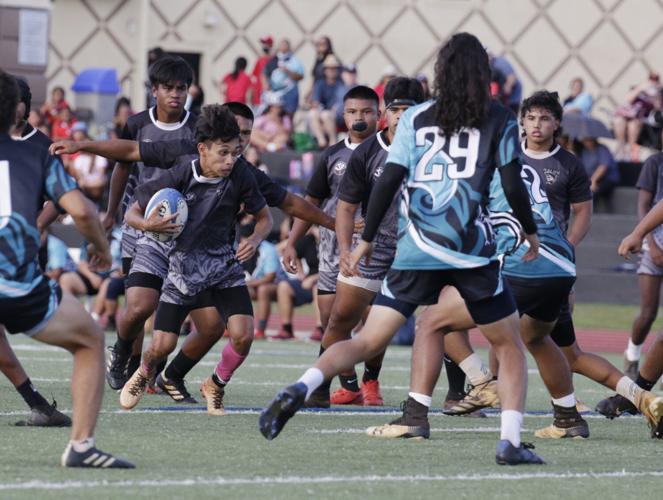 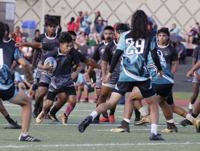 It was  perfect fall weather in Fairfield, Connecticut, on Saturday night as the American International College Yellow Jackets took on the Brown University Bears in the Liberty Rugby Conference championship game.

Both teams came into the match undefeated on the season. The National Collegiate Rugby Coaches Poll has Brown ranked No. 1 in the nation, while AIC was ranked No. 6 going into the big match. AIC earned its spot by overcoming the hosts, Fairfield University, 35-26 in one of the semifinal matches. Brown’s path to the finals went through a familiar foe in Dartmouth University. Brown won 45-13. With both teams confident and hungry, a hotly contested championship match was about to unfold.

Before the match, The Guam Daily Post got in touch with AIC coaching staff members to ask some questions about the program and the culture they have been trying to build, how the Guam boys have settled in, and what kind of expectations they had going into the match and what fans can look forward to afterward, regardless of the result.

When talking to the boys, five from Guam on the AIC roster, it was apparent they were very focused and disciplined about their preparation, being sure not to look past the task at hand.

Assistant coach Jameson Bonti, in his response, confirmed that the program has focused on building a high-performance environment for the athletes to thrive as human beings, while also touching on how the Guam contingent contributes to the team's success.

“The boys from Guam (Izzic Cabrera, Tyler Daga, KK Kaminanga, Christian Reyes and Kekoa Tenorio-Toves) have been a major part of our culture, family and success this season,” Bonti said. “As they continue to grow as young men, mature and fine-tune their skills as young rugby players, the excitement around their potential only increases. All have been pushed in different ways, and all have grown because of the challenges they’ve faced. I would echo the excitement the coaching staff and players feel about having them with us. We always feel confident in our young men, our work ethic and our culture. The staff, this season, has put a strong emphasis on being a character, integrity, and family-focused program. Those values are at our core and are pillars of our success. We coach and mentor the young person before the player.”

When looking at the match with Brown, Bonti explained: “Brown is a physical and disciplined side. It’s going to be a highly competitive match that will push each group to their limit and the boys have had a crisp week of (training) sessions. We are excited about the opportunity to represent our families on a larger stage and face the challenge ahead. Regardless of the result, we are truly building something great here at AIC. This is only the beginning.”

Bonti said it would be a highly competitive match that would push each group to its limit.

Brown received the initial kick to start the game and things were electric from the jump. Both teams brought great energy as the Bears looked to rely on their powerful forwards and their scrum to cause damage early on.

The plan seemed to be working, as AIC was called for 3 penalties in the first six minutes, allowing Brown to gain territory while putting immediate pressure on the Yellow Jackets defense. A kick to touch led to a good lineout from the Bears within the 5-meter line and the first try of the game soon thereafter.

As Brown looked to build on its lead, the AIC defense did well, when Brown was forced to get into its phase count. Good defensive pressure from AIC led to a Brown turnover and Tenorio-Toves had a good early carry, gaining ground quickly to help his team change its field position and put pressure on the No. 1-ranked Bears.

The teams went back and forth, changing possessions on some knock-ons as the intensity of the match was still palpable 20 minutes into the first half. Brown’s set plays continued to cause problems for AIC as multiple scrum penalties were called on the Yellow Jackets and frustration started to creep in.

In the 22nd minute, AIC prop Afa Sanft was given a yellow card, forcing his team to play a man down for 10 minutes.

Despite the disadvantage, AIC hung tough, stifling the Brown attack with great teamwork and effort.

Unfortunately, another scrum penalty led to a penalty try being awarded to Brown in the 24th minute, bringing the score to 14-0. AIC still had 8 more minutes to manage being a man down, but never wavered. Their efforts were rewarded in the 27th minute, utilizing some good ball movement to gain territory before sheer power and persistence got them into the try zone to get on the scoreboard.

Moments later, a successful conversion kick brought the score to 14-7 with plenty of rugby left to play. Just before halftime, Brown took advantage of a poor turnover deep in AIC territory and a subsequent penalty, converting a penalty kick to take a 17-7 lead into the break.

As the second half started, there was some chirping back and forth from both sides, ensuring the intensity of the first half wasn’t going to wane.

Early on, AIC came out with some extra energy, dominating the first two scrums out of the break and putting the Bears on their heels.

The commentators noted that Brown had not really been challenged all season, having scored 261 points while giving up only 20, and they were curious how Brown would respond to being in such a close game. AIC looked to test the Bears’ mettle as well, pushing the pace when in possession with quick starts and quick passing.

Unfortunately for AIC, an offside penalty led to a Brown penalty kick in the 51st minute to bring the score to 20-7.

After kicking to touch, AIC secured a lineout, immediately pressuring the Brown defense. The pressure paid off and Brown was called for a penalty just outside the 5-meter line. Tenorio-Toves initiated the AIC set play and, one pass later, AIC lock Kane Johnson dove in for the try in the 54th minute. Fly half German Rossi nailed the conversion kick from the left sideline, bringing the score to 20-14 with 25 minutes left to play.

Just three minutes later, an unlucky offside penalty on AIC set up Brown for another penalty kick which the Bears converted to give them some breathing room at 23-14.

The pace of the game and the physicality of the Brown team started to take its toll on AIC and Brown scored another try in the 68th minute, bringing the score to 30-14. Another penalty kick just before the final whistle completed the scoring, with Brown winning the Liberty Rugby Championship over AIC, 33-14.

"The boys were focused, played well, and I am incredibly proud of the discipline we showed when our backs were against the wall," Bonti said. "Unfortunately, some things didn’t go our way Saturday night, and that’s sport. What makes us unique as young men and a program is how we respond to adversity."

While disappointed with the result, the AIC Yellow Jackets now have to regroup, learn from their mistakes and tend to any knocks or injuries as they prepare for the National Championships to be held Dec. 9-11 in Houston, Texas.

For the second year in a row, the tournament will be held at Aveva Stadium, home of Major League Rugby team, the Houston SaberCats. Guam football and rugby legend Zach Pangelinan is one of the longest serving members of the SaberCats.