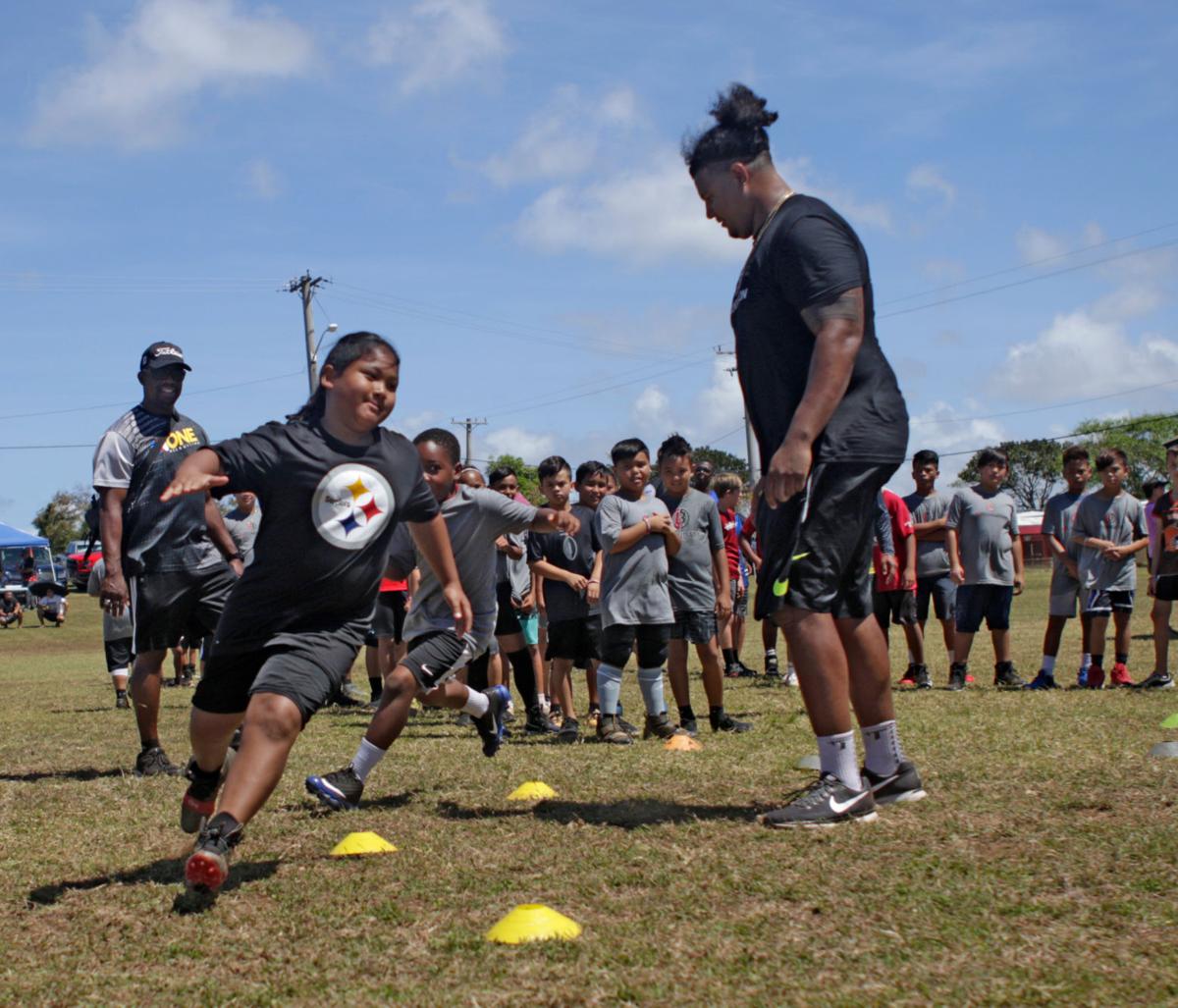 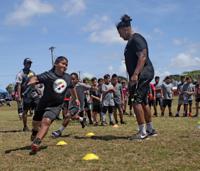 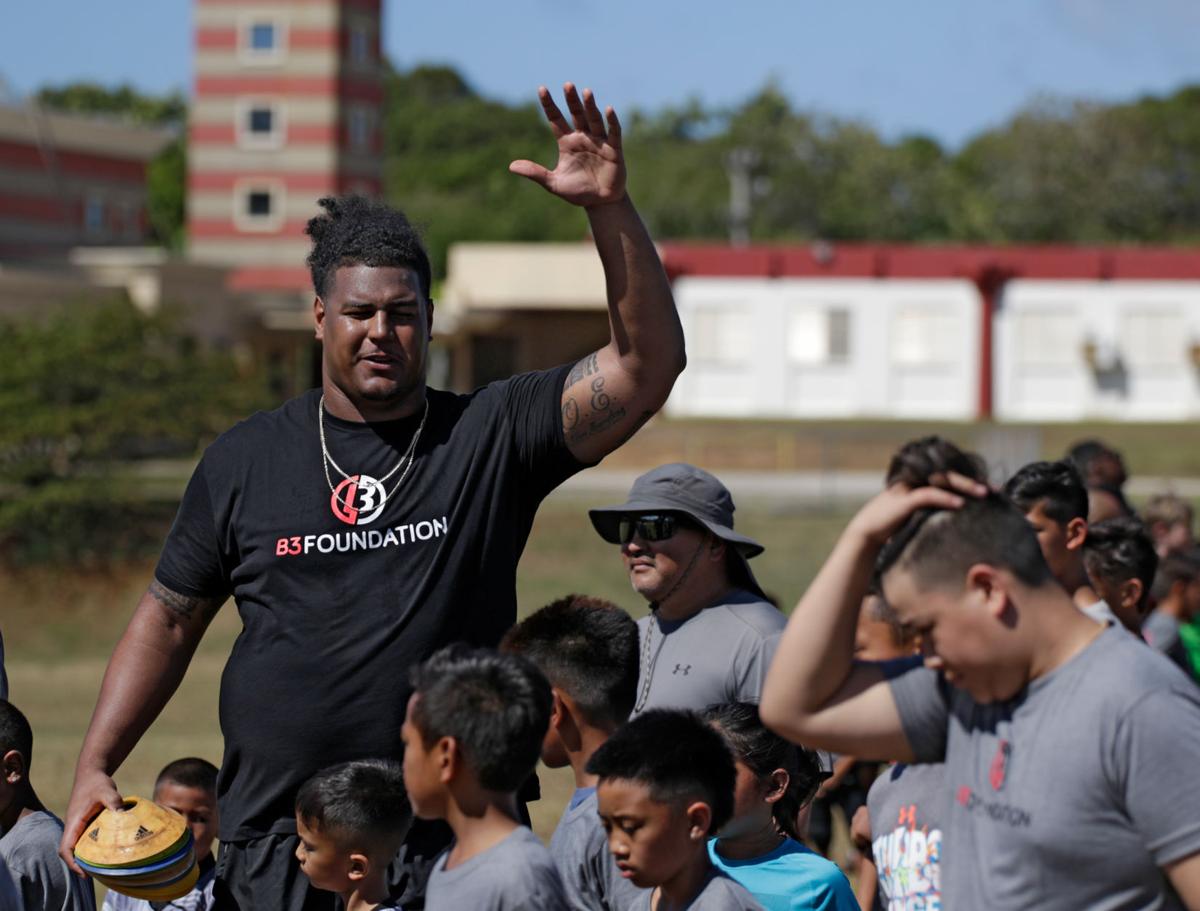 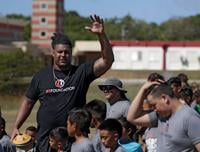 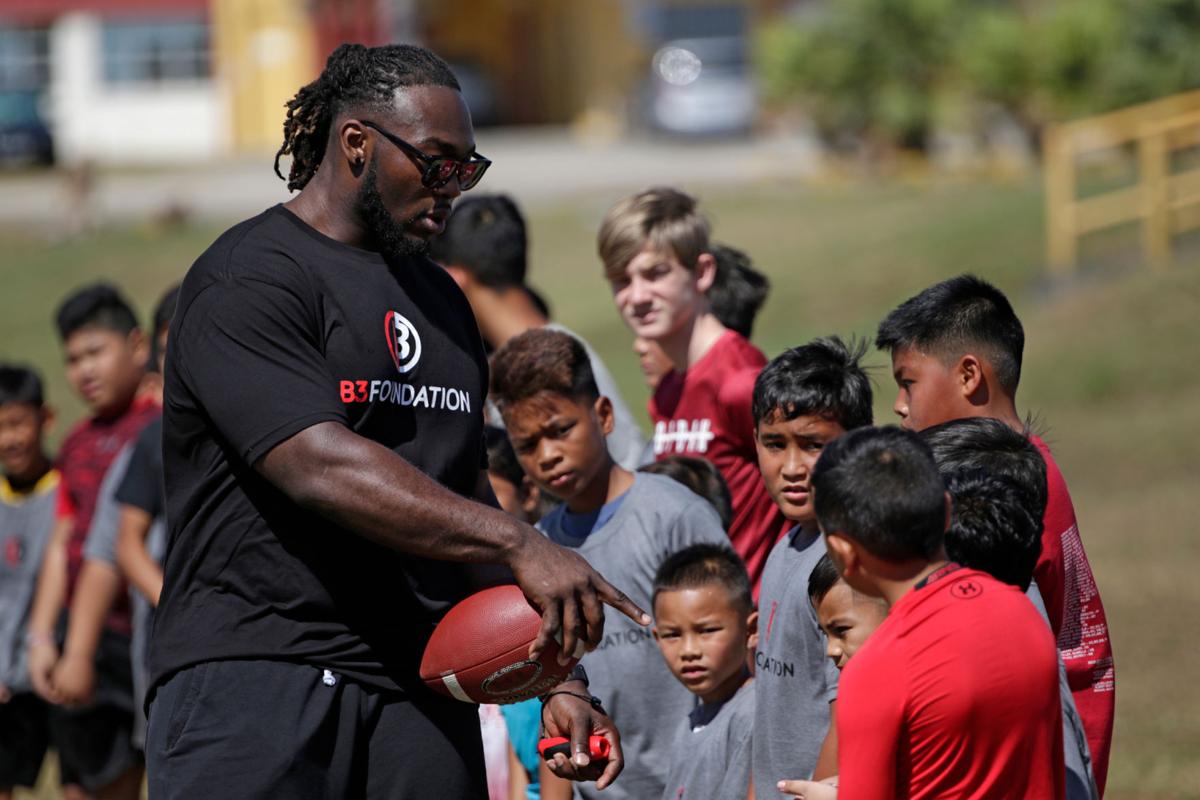 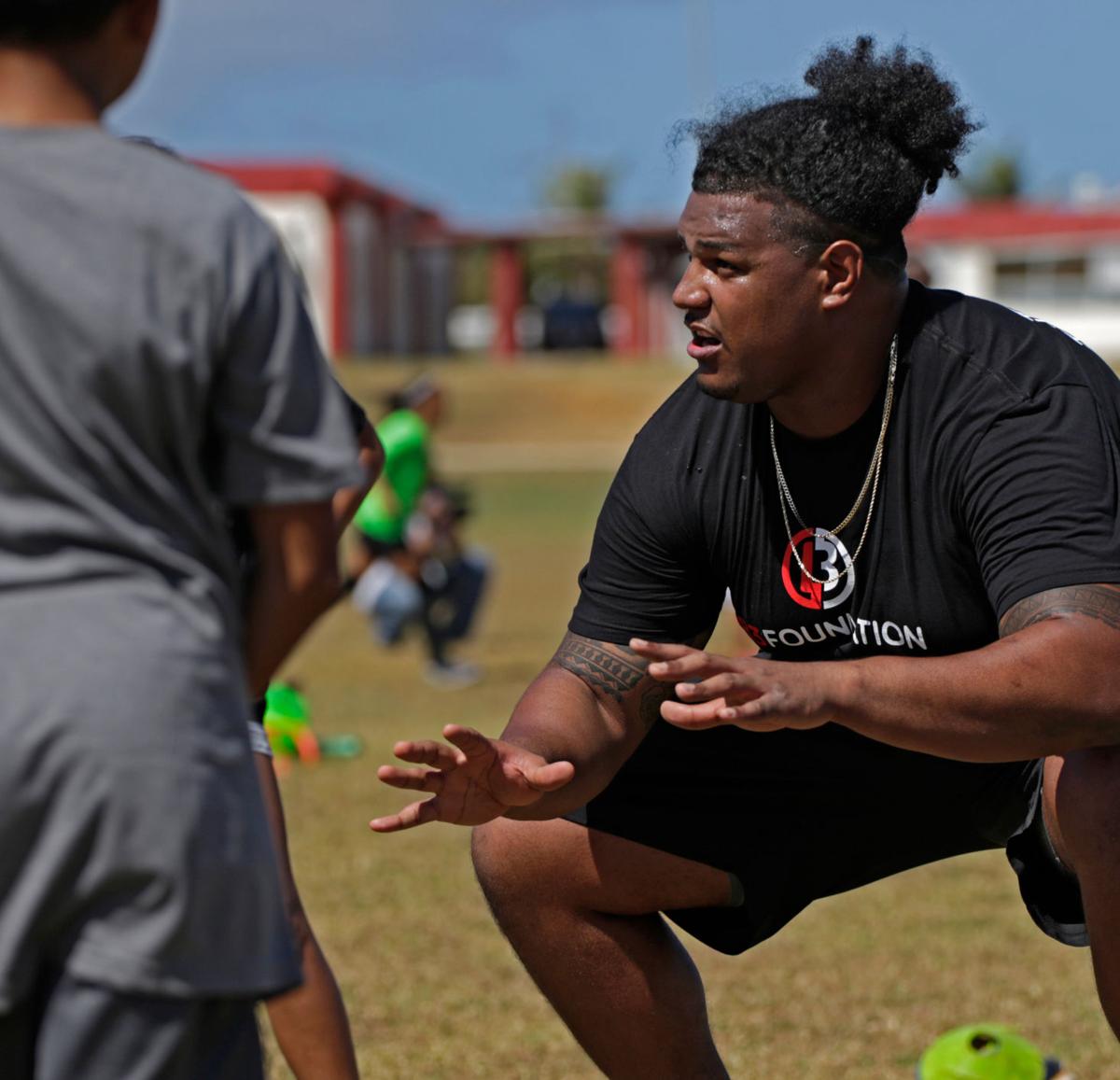 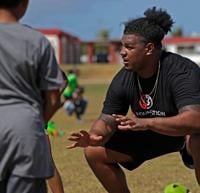 DO IT LIKE THIS: Zach Banner explains a drill to Guam youth football players on Saturday. Matt Weiss/The Guam Daily Post 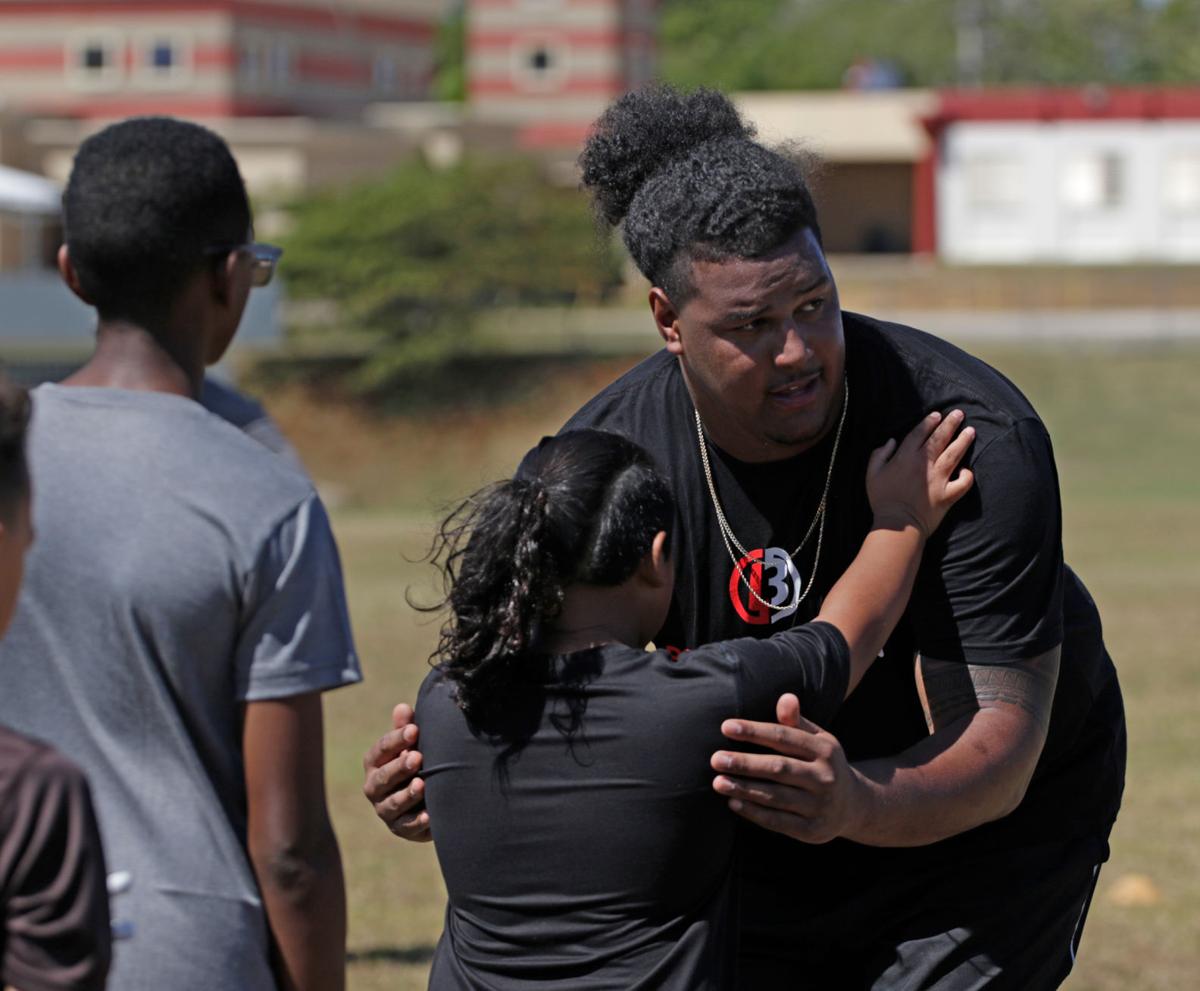 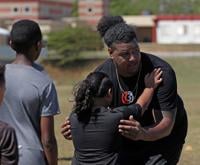 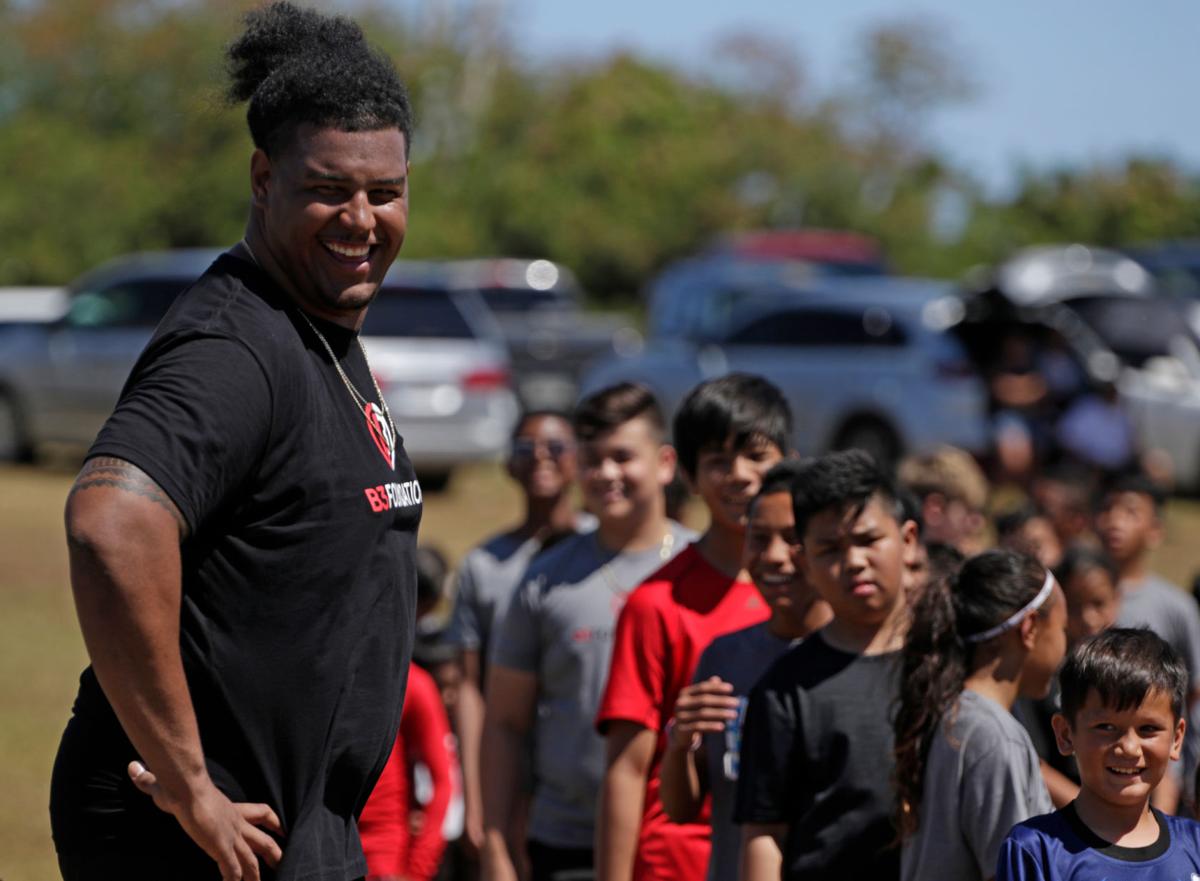 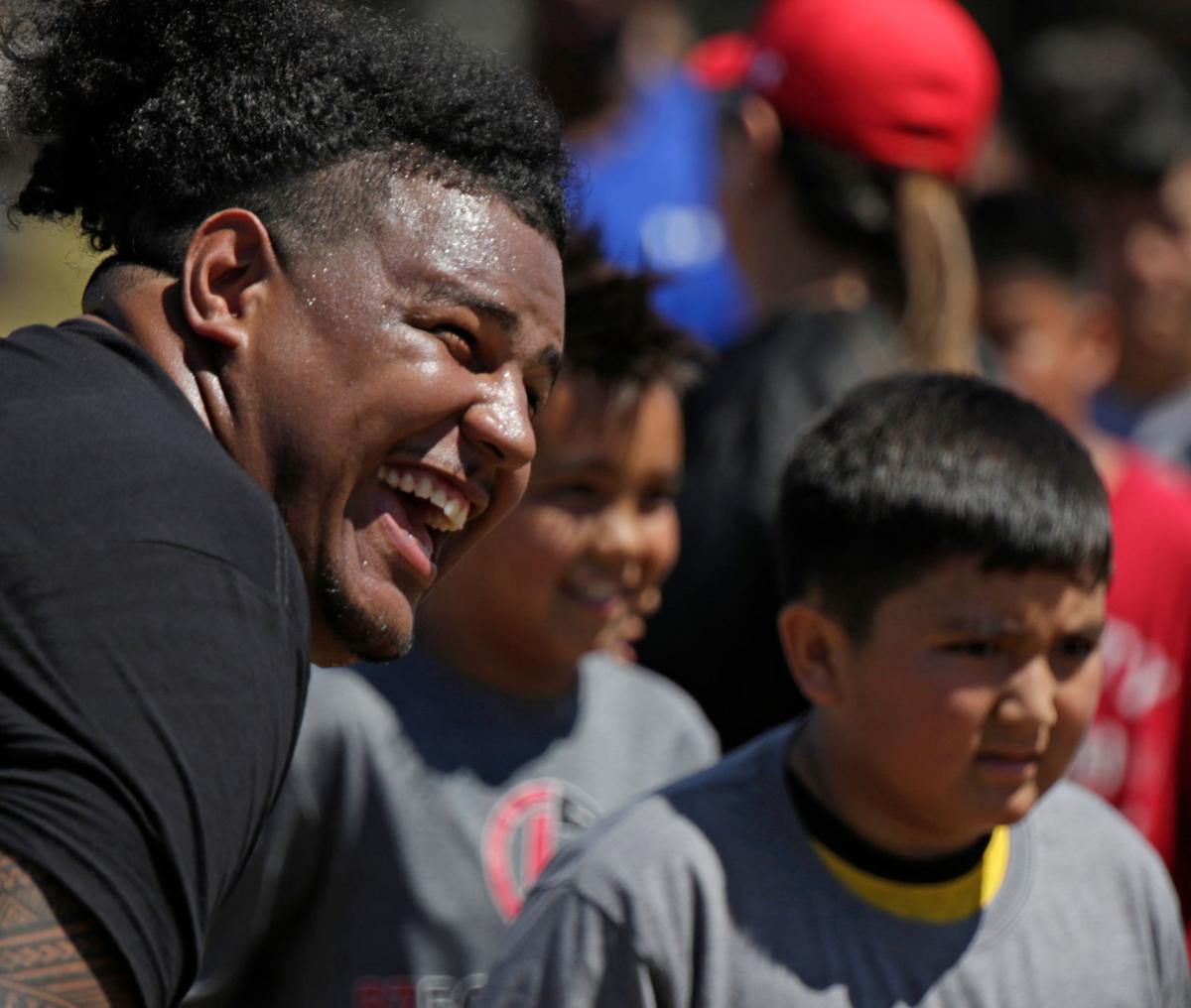 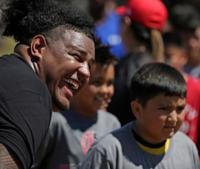 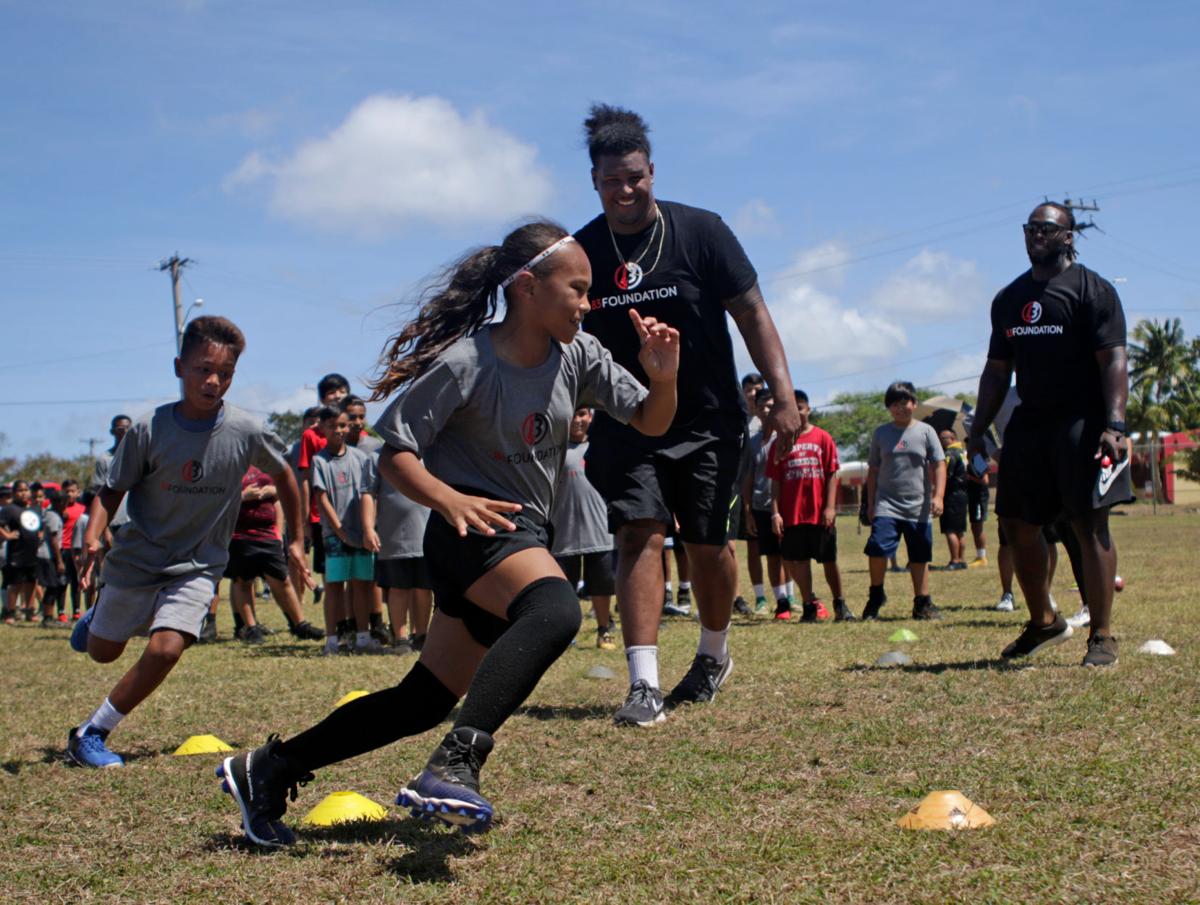 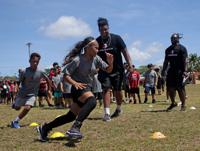 DO IT LIKE THIS: Zach Banner explains a drill to Guam youth football players on Saturday. Matt Weiss/The Guam Daily Post

When Pittsburgh Steelers offensive lineman Zach Banner started his B3 Foundation in 2017, he wanted to inspire children the same way his father, Ron Banner, inspired him.

Zach Banner, through his foundation, built around the mantra, “bringing together, building together, better together,” is doing that. For three years, Banner and the B3 Foundation have reached children in underprivileged communities throughout the world.

“Not every parent can be able to fly their kid to the states, and get them real work,” said Banner, a 6-foot-8, 360-pound, three-year NFL veteran. … “Every year, we just plan on improving and watching the island grow.”

“It is so awesome, the kids get to actually see, participate, and hear from current NFL players, someone they see on TV,” said Allen Blend Sr., president of the Tamuning Steelers. “They actually talked to them about real-life experiences, and share them with them, and give back to the kids.”

“You have to teach them to hold accountability,” Banner said.

If you teach them that strictness and accountability, they can use it as fuel, he added.

“You’re not always going to have a nice boss when you’re at work, one day,” Banner said. “Teachers aren’t going to be the nicest people in the world, but they’re going to want to get you better, or have you improve.

“We try to balance it out, make sure we’re not too harsh on them.”

The minicamp, mixed with toughness and moments of levity, fostered competition and brought smiles to the young boys and girls.

Aiden Aguon, a 10-year-old quarterback and linebacker who, in 2019, split time between the Steelers Manha and Metgot Divisions, was excited with what he learned, and Banner never forgot his island roots.

Banner’s mother, Vanessa, grew up on Guam, moving off the island when she was 16 years old. Banner's grandfather, who died April 25, 2015, was Rafael Mendiola Sukola, from Dededo.

“It feels great because they are sharing their kindness, especially Zach, because I’m glad he didn’t forget where he came from,” Aguon said.

Aguon, a respectful kid, said he enjoyed what Banner and Ogunjobi taught him.

As Blend watched from the sidelines, sometimes stepping in to help with drills, he smiled as the kids showered Banner with a chorus of “yes, Coach.”

“When they are with us, we expect their attention and to be focused on the task at hand - that’s to get better athletically, and, at the same time, mentally,” Blend said.

They need to understand, not just on the football field, but in life as well, you’ve got to pay attention, and put in hard work, he added.

“I’m a true fan of Zach because I believe what he’s doing is remarkable, not just for Guam, but as he reaches out for other communities,” Blend said. …

“And, as far as Larry, he’s always been a good sport. He comes out here, sweating his butt off, but he comes out here and gives 110% to the kids. Hats off to Larry as well, we appreciate them coming out.”

Renee Aflague, 12, a soon-to-be first-year Crusaders football player, said she was excited when she learned the pros were coming to Guam. She said that she was honored by their presence.

“I got professional supervision, and it will get me better on the field, using the tips they gave me,” she said.

When Ogunjobi was the same age as the kids in the camp, he wasn’t interested in football. Like so many kids today, he was fat and wasted his time playing video games. Each day, when the final school bell rang, as other kids played sports, he went home. But, at his mom’s insistence, that changed.

As a sophomore at Ragsdale High School, in Jamestown, North Carolina, the 350-pounder got a double helping of tough love - a one-two punch from his mom and football coach.

“My mom took away my Xbox, got me a coach, and he trained me for about a month or so,” Ogunjobi recalled. “He drove me to high school and told me, ‘you’re going to play football.’ …

"I didn’t finish the first workout. The coaches came up to me the next day and said, ‘Larry, we’re going to make sure you’re still here.’

As the days and weeks wore on, and Ogunjobi saw no way back to his couch, back to his comfortable living room, he succumbed to the situation. He soon found out that the more work he put in, as his body shrank, his confidence swelled.

Ogunjobi, during a junior varsity awards banquet, was named most improved. With his first taste of success, other than the misguided triumphs of leveling up in video games, he wanted more.

Recognizing that kids nowadays have even more distractions than he had, pulling them away from what truly matters, Ogunjobi said, kids need to get active and go outside.

“The biggest thing is just starting these kids early,” he said. … “We live in a day and age where everybody is so caught up on their phone. … These kids nowadays have video games, they have iPads, they’ve got everything but a reason to go outside.”

Ogunjobi, the first-ever player drafted out of the University of North Carolina, Charlotte, the 65th overall pick in the 2017 NFL draft, is an example of defying the odds by working hard.

“If you want something bad enough, you just have to go out and get it,” Ogunjobi said. “You have to have that resiliency and that drive to believe that, ‘I’m different.’ That’s what I always felt like. That’s what I still feel like, to this day. … That’s why my life has transpired the way it has.”

So, if you’re a little, or a lot, soft around the middle, and you have the drive, it’s not too late to achieve your dreams.

“I was such a late bloomer,” Ogunjobi said. “You just have to keep pushing, keep grinding, keep taking those steps.”

“Every year, we just plan on improving and watching the island grow.”