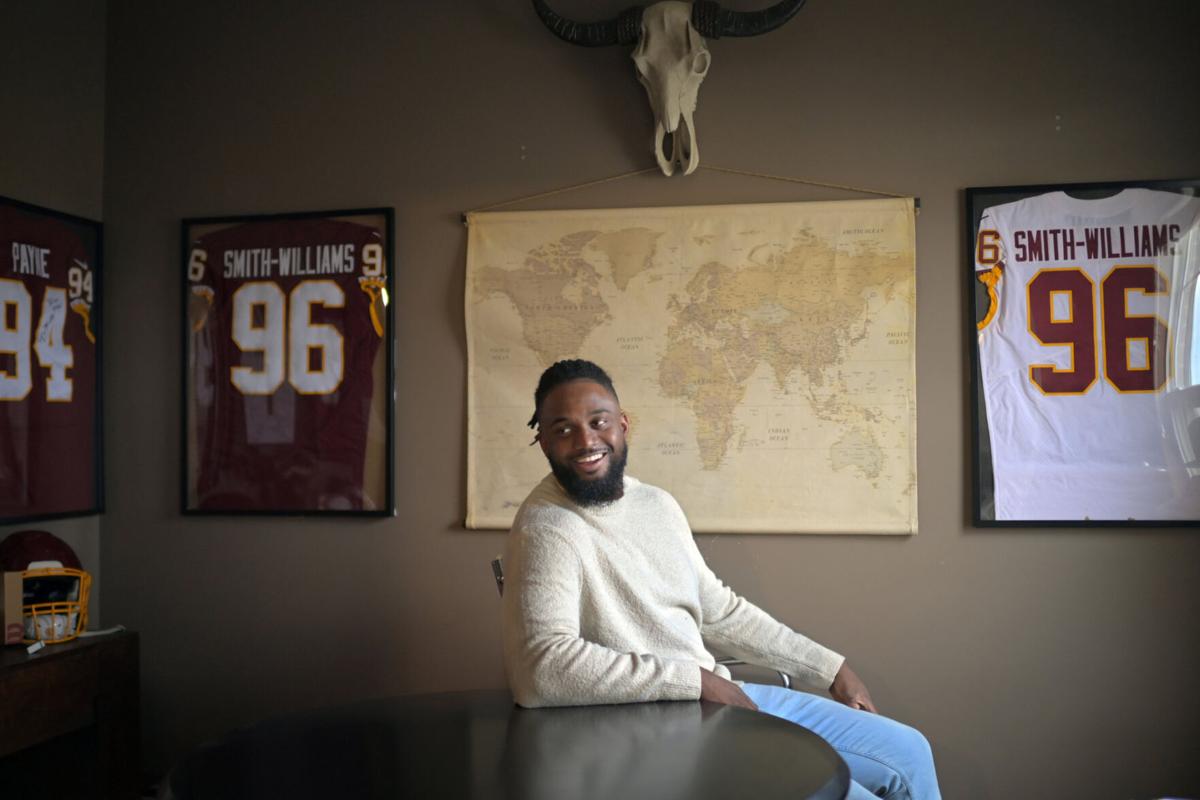 ADVOCATE: Washington Football Team defensive end James Smith-Williams is an advocate for domestic and sexual violence awareness and will receive a national honor from the D.C.-based Vital Voices in December. John McDonnell/Washington Post 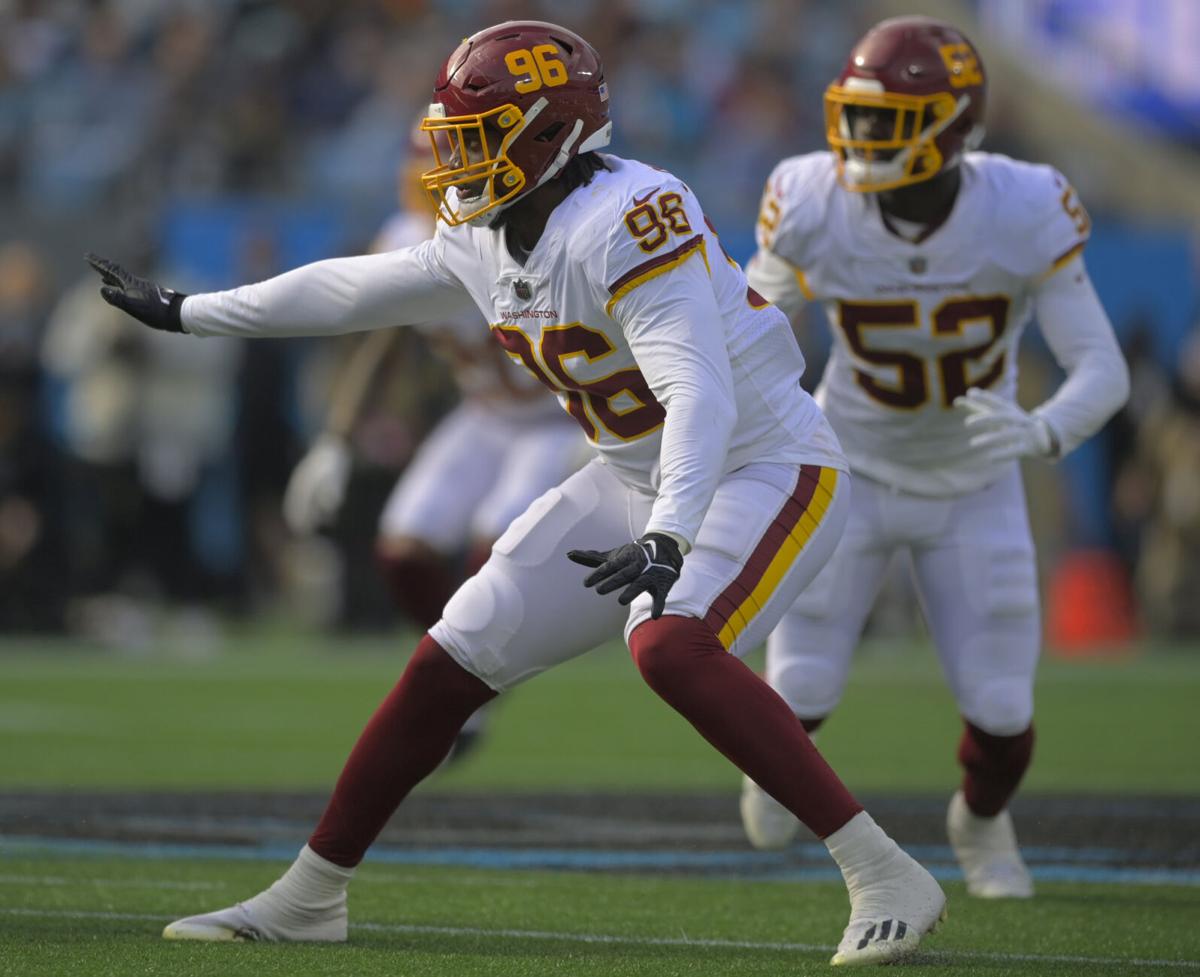 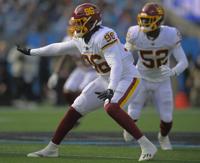 ADVOCATE: Washington Football Team defensive end James Smith-Williams is an advocate for domestic and sexual violence awareness and will receive a national honor from the D.C.-based Vital Voices in December. John McDonnell/Washington Post

The auditorium on the first floor of North Carolina State University's James B. Hunt library, with its rows of seats that rise to the back wall, can make for an intimidating platform. From that stage one day in April 2019, Brenda Tracy, a 5-foot-10 stranger to most in the room, shared her story with close to 400 of the school's male athletes.

But Tracy, who was a single mother of two boys at the time of the attack, didn't press charges and spent years wrestling with despair and suicidal thoughts. Meanwhile, the four men carried on with their lives, the two players each suspended for one game.

As she shared her story that day in 2019, Tracy's recollections made a particularly strong impression on one football player seated in the front row.

"I was in shock thinking about everything she said, reflecting on her story and what I could do to make a difference where I am," said James Smith-Williams, then a senior defensive end for N.C. State. "She had a call to action and was like, 'If you're a good man, what are you doing to be a good man?'"

Shortly after learning Tracy's story, Smith-Williams took action. And over the last two years, he has become an ambassador - the first and only NFL ambassador - for her organization, Set The Expectation, a nonprofit aimed at raising awareness and resources for sexual assault and domestic violence.

The cause has become a passion project for Smith-Williams and, since leaving Raleigh for the Washington, D.C. area after he was drafted in the seventh round by the Washington Football Team in 2020, he has expanded his efforts to help both communities while also trying to initiate a broader change - locally, nationally and within the NFL.

"It's a huge issue that is really not addressed as much as it should be," Smith-Williams said in a recent interview. "The more I learn, the more I'm around it, you see how prevalent it really is."

So far, he has made enough of an impact to be recognized by the NFL Players Association as one of its "Community MVPs" this season. He's also garnered the attention of the D.C.-based women's empowerment organization Vital Voices, which selected Smith-Williams as one of its 2021 Voices of Solidarity, joining past recipients such as President Biden and NFL Executive Troy Vincent. Hillary Clinton, an honorary chair for the organization, will speak at the Dec. 6 ceremony in New York, and Tracy will present Smith-Williams the award.

"I think about the ripple effect," Tracy said. "Anytime I go anywhere to share my story or work with any group of people, no matter how big or small the room is, I might not change the world, but I might inspire the person that does.

"I think about the ripple effect from James, and it's overwhelming for me because I realize someone - and we may never know who it was - but someone will be changed because of him. Someone may be saved because of him."

Because of injuries to Washington's defensive line, Smith-Williams has been elevated to a starting role at defensive end. Against the Panthers, with his mother in attendance, Smith-Williams and defensive tackle Daron Payne had the game-sealing sack of Carolina quarterback Cam Newton, punctuating the team's recent turnaround.

The game was the second NFL start for Smith-Williams and the culmination of a six-year transformation that began with him playing defensive back as a lanky 196-pound freshman for the Wolfpack.

"We weren't sure what he would play at that time," N.C. State Coach Dave Doeren said of Smith-Williams, who finished his collegiate career as a 260-pound defensive end. "We knew that we didn't have a lot of guys that had that length-and-speed combination and felt like it would work itself out. That doesn't happen without really, really working at your development, your diet, the weightlifting that goes with it."

But Smith-Williams quickly earned another role - as a captain and recipient of the team's honorary No. 1 jersey, which he wore as a senior. The jersey was reserved for the one player who emulated the ideal role model for a student-athlete, and Smith-Williams, Doeren said, was a pretty obvious fit. He had already completed his degree in business supply chain management with a GPA above 3.0, interned with IBM for a summer and, since that initial meeting with Tracy, dedicated many off-field hours to raising awareness for domestic and sexual violence.

"A lot of people ask him what made him want to get involved, and I think they assume it was something in his life and something that he was exposed to," his mother, Wendy Williams, said. "But it wasn't. . . . The thing I'd always try to tell him, even when he was in college was, 'You have a platform. You have a voice. People are listening.' "

Tracy has long felt the same way about her story, which is why she has visited more than 100 college campuses and spoken to some 50,000 athletes since 2016.

She tells the athletes that she views them not as the problem, but the solution to ending domestic and interpersonal violence. She tells them that while most incidents of sexual violence are committed by men, most men aren't committing sexual violence - but that the "good guys" who may mean well but are complicit in their silence are pivotal to helping solve this global issue.

"I really sat and reflected with that," Smith-Williams said. "I think it's kind of led me forward as I've been here, in the NFL and in D.C., trying to do more things, trying to be that good man, that good person."

For Smith-Williams, the action started with spearheading a donation drive for InterAct, an organization in Raleigh that provides services to domestic violence and sexual assault victims and their families.

With Tracy, he later helped to organize the Atlantic Coast Conference's first Set The Expectation (STE) game, to create more awareness around Tracy's organization during N.C. State's win over Ball State in 2019. Smith-Williams also represented STE at the East-West Shrine Bowl in 2020, with teal laces in his cleats and the organization's signature teal-and-purple ribbon on his helmet.

"He's not afraid to speak what he feels is right, and to do what he knows is right," Wendy Williams said. "And that's just the way he's always been since he was a little boy."

That willingness to speak up didn't change when Smith-Williams went pro.

Not long after he was drafted, The Washington Post detailed in multiple reports widespread sexual harassment and misconduct from former male employees of the Washington Football Team. Smith-Williams, a late-round rookie who had yet to take a snap in the NFL and wasn't guaranteed a roster spot, penned a lengthy statement on Twitter.

"I believe that being silent on things you know to be wrong is almost as bad as committing the act yourself," he wrote. " . . . There is much work to be done in every walk of life, but especially our industry, and it isn't just one [man's] responsibility, but all of ours."

Tracy remembers the conversation with Smith-Williams when he told her he wanted to acknowledge the allegations. She didn't pressure him and instead warned him of the risk. But his response mirrored what he learned a year earlier when he listened to Tracy's story.

"To have the conviction to feel like, 'I'm here to be a change agent. All eyes are on us. Who am I if I don't say something?'" Tracy recounted him saying. "I don't know that people really understand what that meant for him to do that."

Smith-Williams was named Tracy's first NFL ambassador a month after he was drafted, and their work together has only increased.

In October, through a program Smith-Williams conceptualized, he and Andi Sullivan, a midfielder for the Washington Spirit, met with 20 children who were placed in foster care because of domestic violence. Together they laid out vision boards to remind the children their futures were wide open. Then Smith-Williams treated them to an afternoon at Dave & Buster's.

Weeks later, Smith-Williams and Sullivan partnered with the D.C. Coalition Against Domestic Violence to buy more than $3,000 worth of gifts for children whose families have been affected by domestic violence.

"Young men look up to sports icons," Vital Voices president and CEO Alyse Nelson said of Smith-Williams. "I think until recently we didn't see these men taking a stance on one of the major issues around the NFL, the major issues that are plaguing our society: violence against women. To see that you can be a strong male athlete and icon and you can also care about the rights of women and being a voice of solidarity - and understanding that this is not just a women's issue, it is everybody's issue - I think that's profound."

Tracy says the bulk of Smith-Williams's work is done behind the scenes, and it's the little interactions - like the times survivors of domestic violence reach out to him to thank him - that mean the most to him. Because, like Tracy, he thinks of the ripple effect.

"Obviously, you want to build off of it and become an actual change-maker, be it policy change, just the numbers themselves," Smith-Williams said. "I want this to happen in every city. I want this to become something that we're very comfortable talking about in society and are like, 'No, this is just completely unacceptable.'

"What Brenda always says is very true: The goal is for me or her to no longer have a space doing this work, because it's not a problem. That's the end goal."