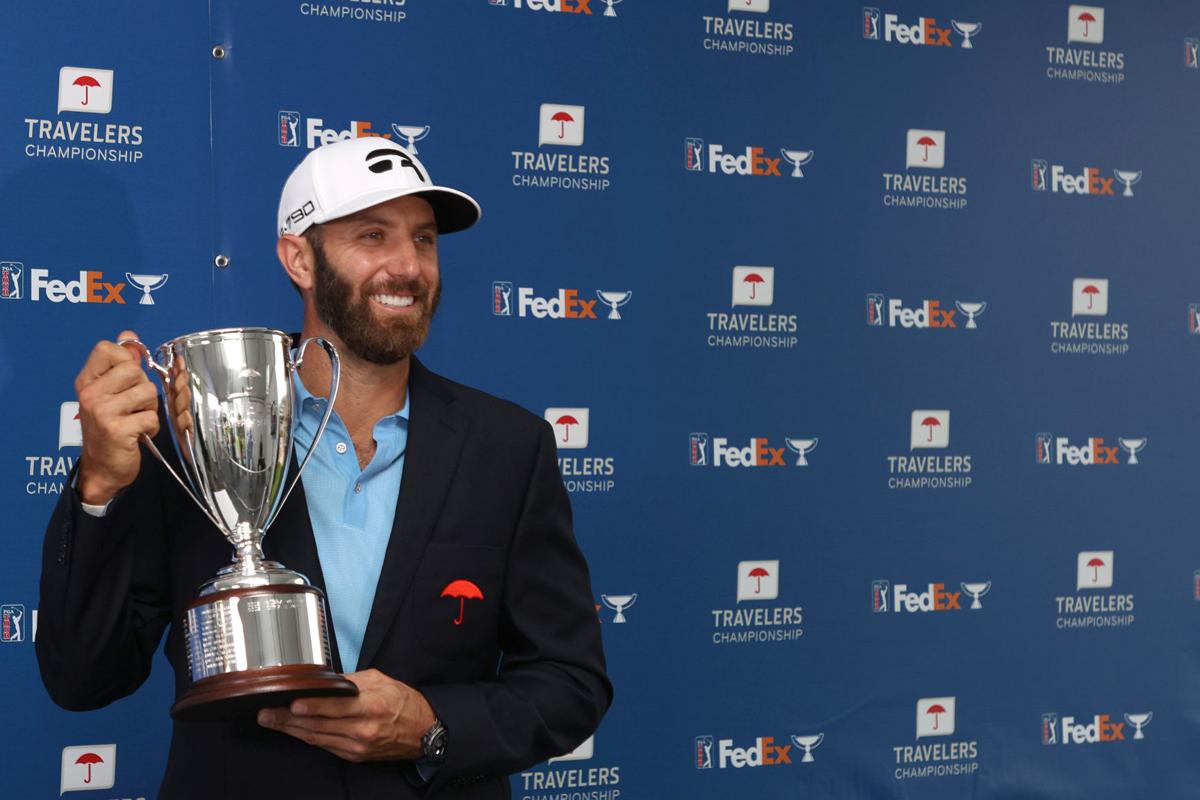 HOLDING OFF THE COMP: Dustin Johnson of the United States poses with the trophy after winning the Travelers Championship at TPC River Highlands on Sunday, June 28, in Cromwell, Connecticut. Rob Carr/Getty Images/Tribune News Service 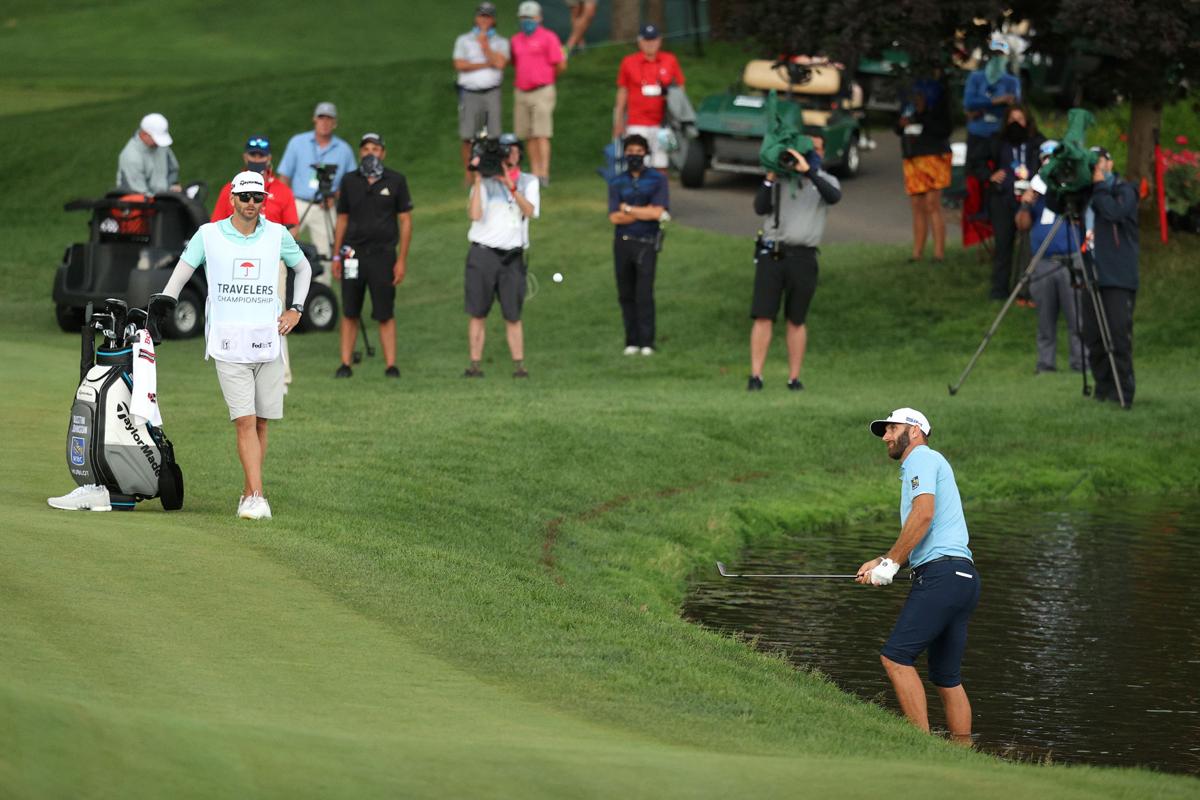 OUT OF THE WATER: Dustin Johnson of the United States plays a shot as he stands in the water on the 15th hole during the final round of the Travelers Championship at TPC River Highlands on Sunday, June 28, in Cromwell, Connecticut. Maddie Meyer/Getty Images/Tribune News Service

HOLDING OFF THE COMP: Dustin Johnson of the United States poses with the trophy after winning the Travelers Championship at TPC River Highlands on Sunday, June 28, in Cromwell, Connecticut. Rob Carr/Getty Images/Tribune News Service

OUT OF THE WATER: Dustin Johnson of the United States plays a shot as he stands in the water on the 15th hole during the final round of the Travelers Championship at TPC River Highlands on Sunday, June 28, in Cromwell, Connecticut. Maddie Meyer/Getty Images/Tribune News Service

CROMWELL, Conn. — Just minutes after Dustin Johsnon was ankle deep in water on the 15th hole, pants rolled up to his knees, looking to save the hole and, potentially, his entire tournament, the final round of the Travelers Championship was suspended as a storm rolled through Cromwell.

After taking the lead away from Brendon Todd on the ninth hole, Johnson was teetering on the edge of blowing his advantage as Kevin Streelman, a former champion at TPC River Highlands, slowly climbed his way up the leaderboard just one hole ahead. Johnson’s tee shot on the 13th hole went soaring out of bounds, and he settled for a bogey. On No. 15, his first shot fell into the rough, just feet away from a water hazard. He was able to recover for par, though Streelman was surging.

While the 58-minute stoppage didn’t help Johnson, he said, he was still able to navigate his final three holes, and win his 21st event on the PGA Tour. Streelman finished second at 18-under, followed by Will Gordon and Mackenzie Hughes, both at 17-under.

Johnson’s win came with no spectators in attendance due to COVID-19 restrictions. After recording a par for victory on the 18th, he pulled his ball from the hole, and gave a nod towards the scattered applause coming from Travelers staffers and residents who live on the course.

“It was big because I hadn’t played very well,” said Johnson, 36. “But I put in a lot of good work the last couple weeks after Colonial, and so it’s nice to see the game just start coming around.

“It was definitely strange playing with no fans, but you still can feel the pressure, you still can feel how important a golf tournament it is, and you’re coming down the stretch, to me it felt the same, whether it was a million fans or zero.”

After shooting a career-low 61 on Saturday to move two strokes behind Todd for second, Johnson, the sixth-ranked golfer in the world, scrapped out a 3-under 67 on Sunday; four birdies and a bogey on the front nine, and two birdies and two bogeys on the back nine. He said he pulled his tee shot on the 13th just a bit, but said his par save on 15 gave him confidence.

“I was ready to finish out the golf tournament,” he said.

Upon play resuming, Johnson bogeyed hole No. 16. His tee shot landed in the bunker, and his shot out of the bunker skipped 30 feet past the pin, leaving him a two-putt for bogey. Streelman had his chances to tie Johnson on holes 17 and 18, but posted pars on both. A tap-in at 18 extended Johnson’s streak to 13 straight years with a win, his first since the WGC Mexico Championship in 2019.

Johnson claimed the stoppage gave him too much time to think, and took him out of his groove. He said the suspension helped him get a look at a scoreboard and see how close Streelman was to him.

“I knew what I needed to do, but sitting there, you’re cold, you’re coming out, you start on a par-3, it was difficult,” Johnson said. “But I managed to get it done.”

Streelman, 41, who won the 2014 Travelers with a record-setting seven birdies to close out his round, recorded a bogey-free final round Sunday, scattering three birdies. He shot a 7-under 63 on Saturday to put himself into position to contend on Sunday.

“I have to take a lot of positives,” Streelman said. “It’s a little bit disappointing. I just played beautifully. That shot on 17, I just don’t how it didn’t come down that hill. Literally a foot left and it’s a kick-in and maybe we’d have a chance at a playoff, but Dustin is playing beautifully. He’s obviously tough to compete with when he’s on top of his game.”

Todd, 34, entered the day alone in first place at 18-under, two strokes ahead of Johnson. But after recording nine birdies on Saturday, he couldn’t convert any on Sunday, as he posted 11 consecutive pars to open his round. As Johnson passed him with a birdie at the ninth and continued to build upon his lead, Todd recorded his worst hole of the tournament on 12 — a triple-bogey that dropped him to 15-under.

Todd hadn’t recorded a bogey since the fourth hole of his opening round on Thursday, and had posted a string of 61 consecutive holes with a score of par or better.

The back-nine blunder cost Todd a shot at his third win on tour this season. His career had taken a steep downturn prior to 2020. After winning the Byron Nelson Championship in 2014, Todd spiraled downward in the world rankings. He missed the cut at 25 of the 29 tournaments he played in during the 2015-16 seasons and lost his status on the PGA Tour.

Will Gordon, 23, finished third at 17-under. He shot a career-low 62 on Friday to tie for second heading into the weekend, and followed with a 1-over par 71 on Saturday.

His finish on Sunday, a 6-under 64, earned him a special temporary tour card, which allows him unlimited sponsors exemptions for the rest of the season.

“I can’t control all that stuff,” Gordon said. “So I’m just trying to play the best golf I can.”

Mackenzie Hughes tied Gordon for third. The 29-year-old native of Canada shot the tournament’s third-ever 10-under par 60 on Thursday, and shot back-to-back 68s on Friday and Saturday to remain in contention.

The Canadian-born Hughes shot a 3-under 67 on Sunday, with birdies on the 17th and 18 holes to make a late climb up the leaderboard. He made an impressive 47-foot putt on 17 for birdie, and chipped in from 43 feet on 18 for birdie.

“The fact that they both went in was one of the craziest things I’ve ever done,” Hughes said.

Kevin Na finished fifth at 16-under. Bryson DeChambeau, Ryan Armour, Brendan Steele, Patton Kizzire and Scott Stallings all tied for sixth at 15-under.

Two-time champion Phil Mickelson, who was appearing in his first tour event since turning 50 last week, tied for 24th at 11-under after leading the tournament through two rounds. Jordan Spieth, the 2017 winner, tied for 54th at 6-under.

Do you agree with the extended Pandemic Condition of Readiness 1?

Target COVID-19 closures with precision, rather than a broad brush

The first presidential debate 2020 was held Wednesday, so let's talk about national politics. In my column four years ago, I projected Donald … Read more

Few topics have ignited our keyboards as much as COVID-19 and the perceptions surrounding this pandemic, some of which warrant clarification. Read more