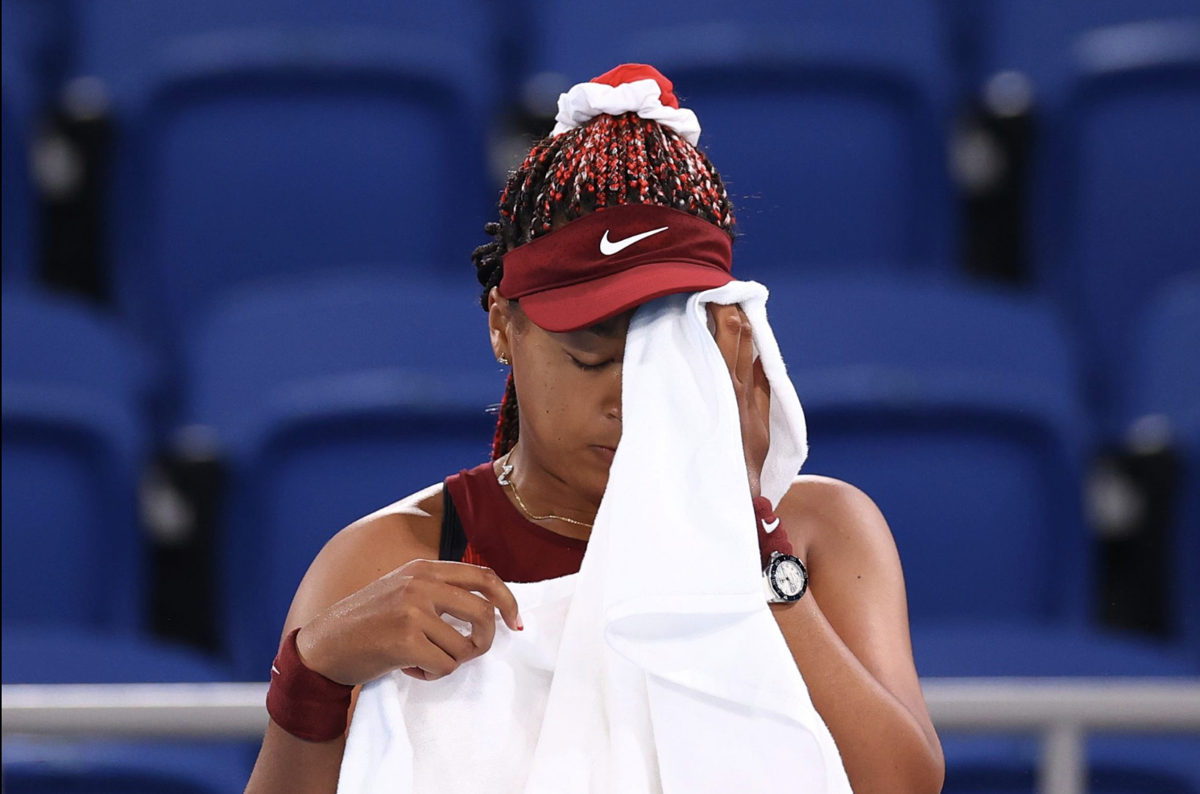 PRESSURE: Naomi Osaka of Japan reacts after losing her third round match against Marketa Vondrousova of Czech Republic July 27 in the Women's Singles at Ariake Tennis Park in Tokyo, Japan. Edgar Su/Reuters 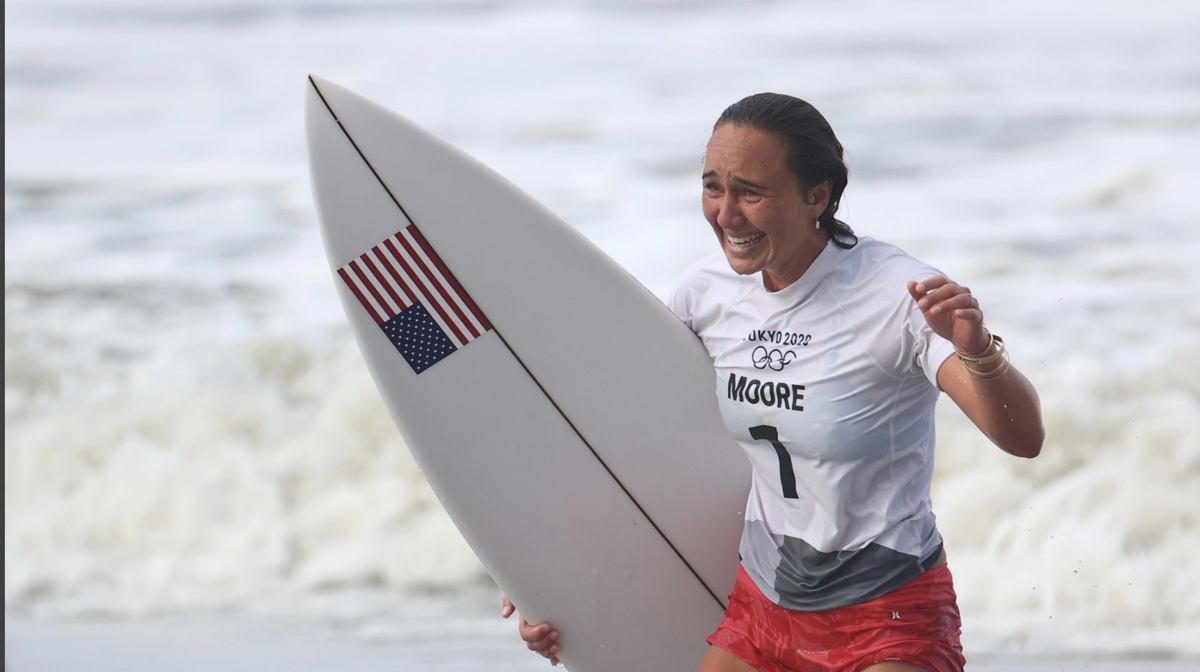 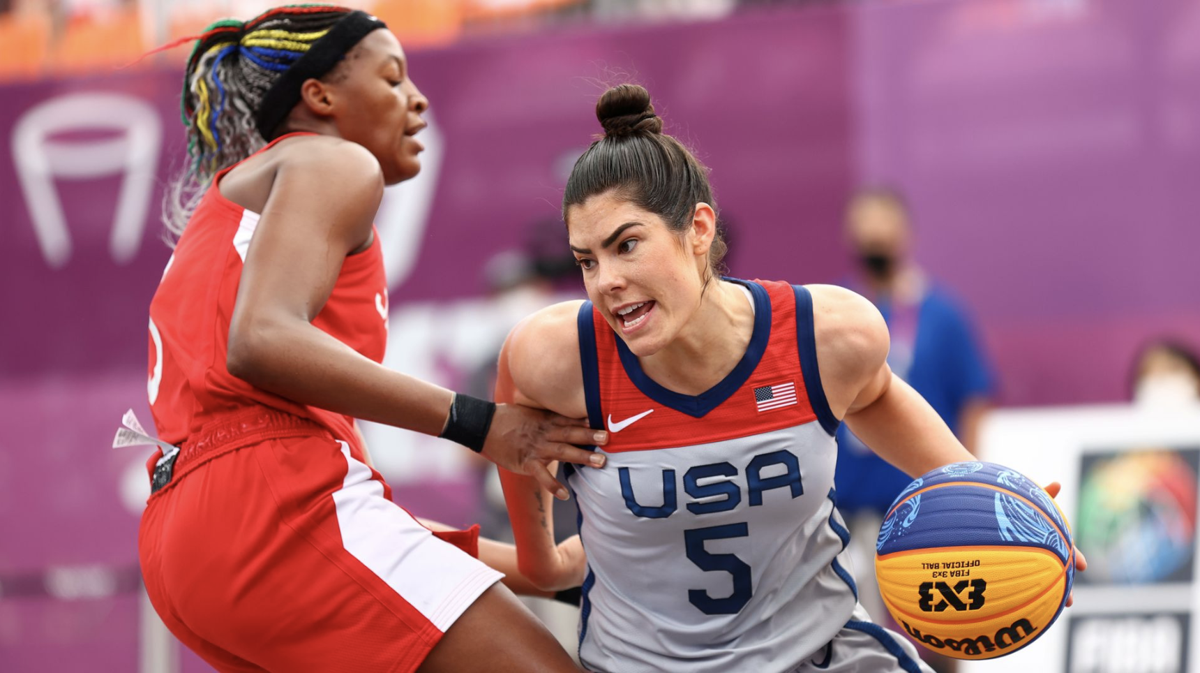 UPSET: Stephanie Mawuli of Japan in action with Kelsey Plum of the United States during a match in Pool A matches of the 3x3 women's games July 27 at Aomi Urban Sports Park in Tokyo, Japan. Andrew Boyers/Reuters

PRESSURE: Naomi Osaka of Japan reacts after losing her third round match against Marketa Vondrousova of Czech Republic July 27 in the Women's Singles at Ariake Tennis Park in Tokyo, Japan. Edgar Su/Reuters

UPSET: Stephanie Mawuli of Japan in action with Kelsey Plum of the United States during a match in Pool A matches of the 3x3 women's games July 27 at Aomi Urban Sports Park in Tokyo, Japan. Andrew Boyers/Reuters

Japan's great hope for tennis gold Naomi Osaka was beaten on Tuesday in the third round of the Tokyo 2020 Olympics tournament, saying she had not known how to cope with the pressure of the occasion.

The world number two was swiped aside 6-1 6-4 by Czech Marketa Vondrousova in a shock result which dealt a blow to Japan's goldrush hopes.

Tokyo 2020 had marked Osaka's first tournament since pulling out of Roland Garros in May, when she said she had been suffering from depression for almost three years.

Osaka had said then she would boycott news conferences to raise awareness of players' mental well-being, but spoke to reporters after this defeat.

"I definitely feel like there was a lot of pressure, this time around," she said. "I think it's maybe because I haven't played in an Olympics before and for the first one to be here was a bit much.

"But I think I'm glad with how I played... with taking that break that I had. I've taken long breaks before and I've managed to do well.

"And I'm not saying that I did that right now, but I do know that my expectations were a lot higher than how my result was. So... I think my attitude wasn't that great, but I didn't really know how to cope with that pressure... so that's the best that I could have done in this situation.

"For me, I'm really glad to be here. I'm sad that I lost, of course, but all in all really happy with my first Olympic experience."

The tennis event has now lost both of its women top draw cards after world number one and Wimbledon champion Ash Barty was beaten in Sunday's first round.

Osaka, who lit the Olympic cauldron on Friday to open the Games, seemed out of sorts on the Tokyo blue courts and never settled into a rhythm as Vondrousova forged ahead.

The Japanese player sprayed a costly 18 unforced errors throughout the match - three times the number made by Vondrousova.

Ferreira recovered from breaking his board on the first wave to beat Japan's Kanoa Igarashi in the final, while Moore out-classed South African outsider Briana Buitendag to secure victory in the women's event.

Australia's Owen Wright took the men's bronze after a tense 35-minute battle with world number one Gabriel Medina, edging out the Brazilian by two-tenths of a point, while Japan's Amuro Tsuzuki beat 19-year-old American Caroline Marks to claim the women's bronze.

The final day of competition started with big, clean waves that delighted the competitors, but a strong onshore breeze picked up to make the swell choppier and more inconsistent with good waves harder to come by.

It made no difference to Ferreira and Moore as they went on the attack in pursuit of Olympic gold.

Having learned to surf on the lid of his father's fishing bin while growing up in Brazil, the 27-year-old Ferreira popped up on any wave that looked promising, notching scores of 7.0 and 7.77 to open an early lead as Igarashi struggled on the beach where his father learned to surf.

Knowing he had done enough to win, Ferreira began surfing his way in to the shore with a minute to go, greeting the final horn with his arms stretched to the heavens before being carried shoulder-high from the water by his team mates.

"I think it's one of the best days of my life, for sure. For me that was a long day and it was a dream come true, for sure. The last couple of months I've been training a lot, just to live in this moment," an emotional Italo told reporters.

Buitendag had beaten seven-times world champion Stephanie Gilmore and 19-year-old American prodigy Caroline Marks to get to the final, but Moore proved too much in waves that had size and power but were almost impossible to predict.

The 28-year-old nailed two excellent waves just past the mid-point of the heat and though Buitendag battled to the end, there was little she could do to close the gap and Moore ripped off a final victory wave before greeting the South African at the water's edge.

Japan's women shocked an undefeated U.S. team packed with WNBA players on Tuesday as 3x3 basketball wound down to the elimination stage at its Olympics debut.

Mai Yamamoto led with eight points, including a critical two-pointer with about a minute left to put her team ahead. Japan advanced to 5-2 and second place in the pool round.

Japan head coach Torsten Loibl said the victory was important to show his team is ready for the knockout stages.

"It's not important to win or lose, but it's a message," he said from the stands moments after the final whistle sounded.

Lydia Jacoby would likely have been watching the Tokyo Games as a spectator had the event not been postponed by a year but on Tuesday the Alaskan teenager upstaged Olympic and world champions to win gold in the women's 100m breaststroke.

The 17-year-old pipped Tatjana Schoenmaker to gold, touching in a time of 1:04.95 with the South African 0.27 behind. Jacoby's team mate, Rio Olympic champion and world record holder Lilly King, was in the bronze medal position in 1:05.54.

Jacoby accelerated over the final 25 metres to push ahead of her two rivals, who had been expected to battle it out for gold. After touching the wall she looked stunned as she looked up at the scoreboard.

Jacoby, the first Alaskan native to win an Olympic swimming gold medal, said she had been planning to come to Tokyo last year with her family to watch the Games before they were postponed due to the COVID-19 pandemic as she had little chance of making the team.

Hachimura is the face of Japan - and its underdog basketball team

SAITAMA, Japan - The man with his picture plastered on a curry-flavored cup noodle available at convenience stores throughout Tokyo was noneth…

My issues with science

If you read my columns regularly, you know that I have this thing with science. Read more