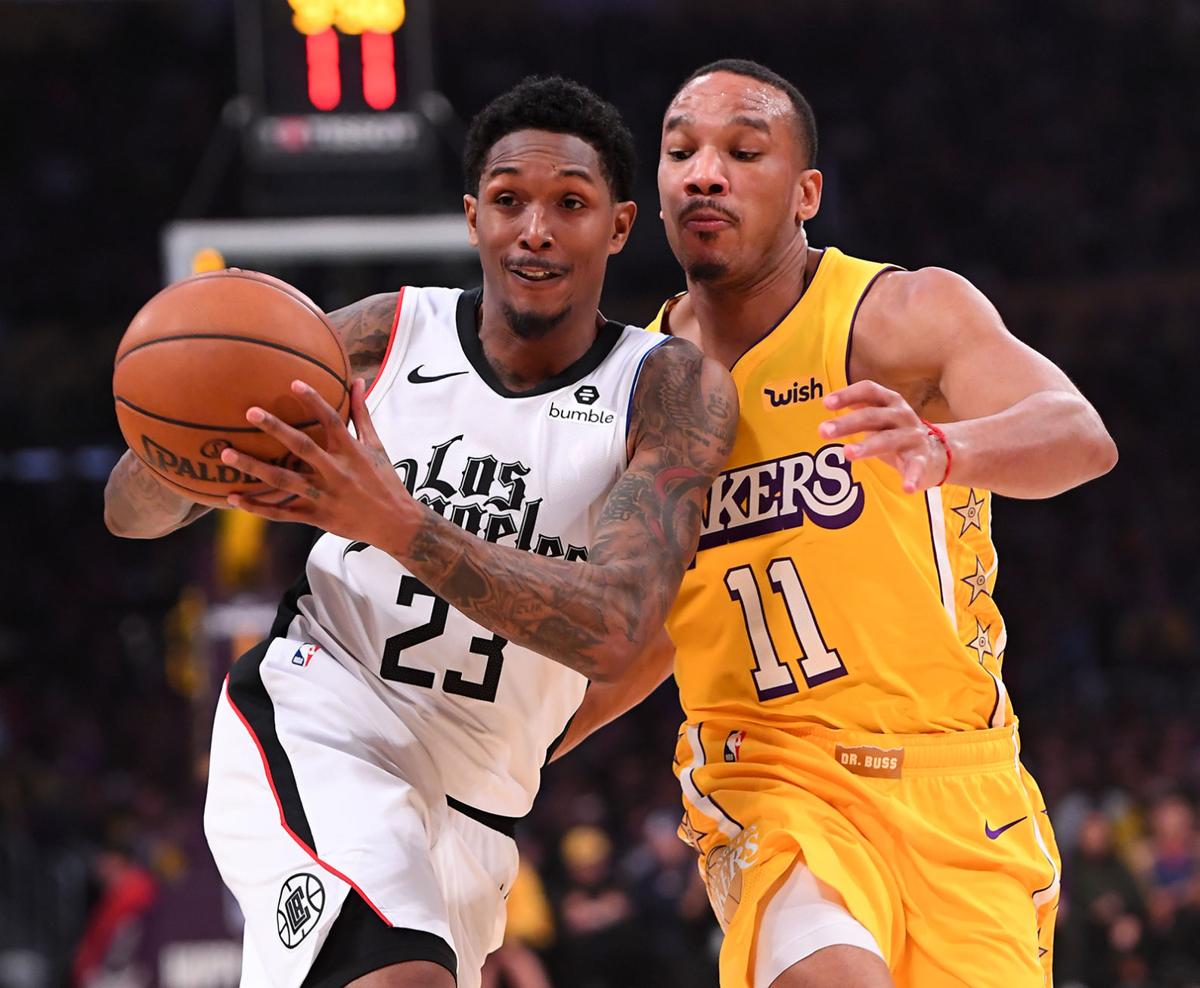 OUT OF THE PLAYOFFS: In this December 2019 file photo, Los Angeles Lakers' Avery Bradley guards Los Angeles Clippers' Lou Williams as he drives to the basket in the first half of the game at Staples Center. Bradley, whose daughter has a compromised immune system, has chosen not to join the Lakers in Orlando for the conclusion of the season after the league shut down March 11 due to COVID-19. Jayne Kamin-Oncea/Getty Images/Tribune News Service 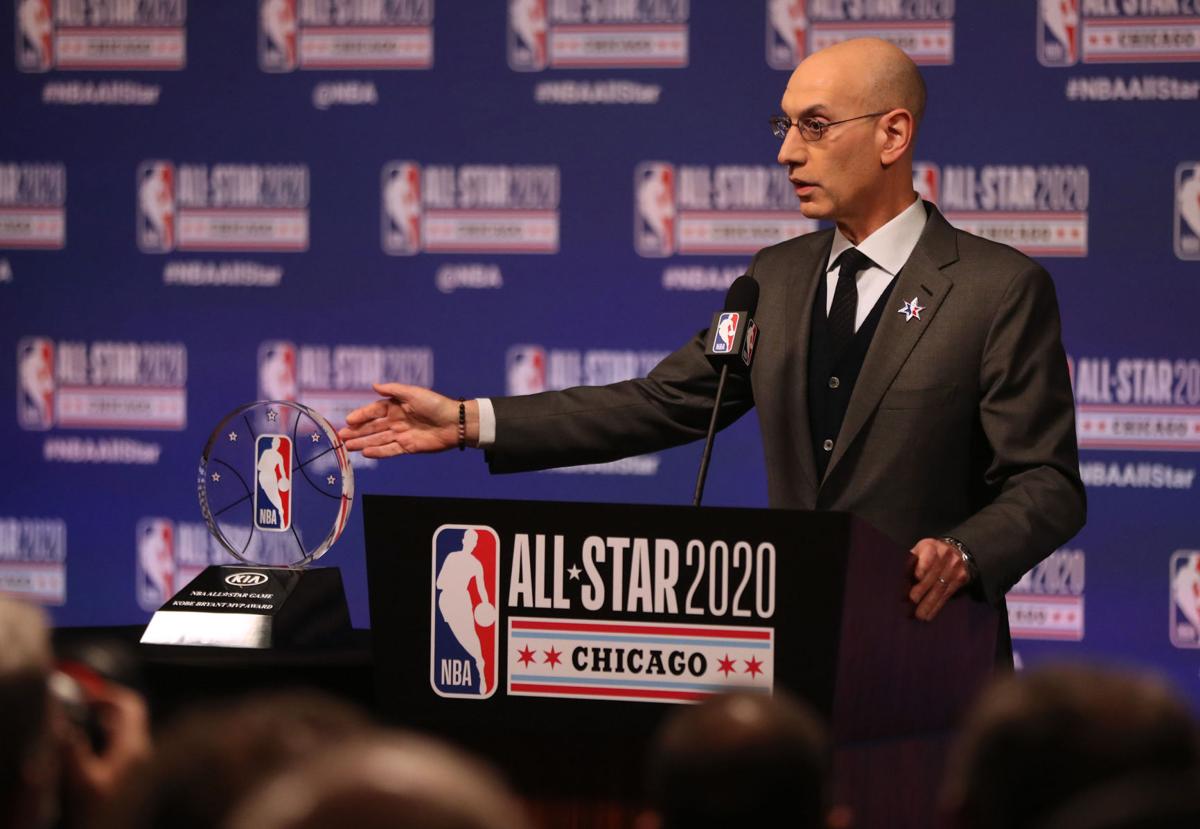 OUT OF THE PLAYOFFS: In this December 2019 file photo, Los Angeles Lakers' Avery Bradley guards Los Angeles Clippers' Lou Williams as he drives to the basket in the first half of the game at Staples Center. Bradley, whose daughter has a compromised immune system, has chosen not to join the Lakers in Orlando for the conclusion of the season after the league shut down March 11 due to COVID-19. Jayne Kamin-Oncea/Getty Images/Tribune News Service

The NBA scored points with the public when it suspended the 2019-20 season at the onset of the coronavirus outbreak, setting an early tone March 11 and charting a path for other sports leagues to follow.

The NBA planned to be pragmatic. Commissioner Adam Silver pledged to listen to research and data before picking a return date and location.

That initial thrust started to fall by the wayside on June 4 when the league settled on Walt Disney World in Orlando, Fla., as the location to restart the season. While the campus is likely one of few places capable of providing the necessary space, the state entered shutdown late, opened early and only recently required people wear masks in public.

But as coronavirus cases in Florida continue to spike, the restart only grows closer. The league has released its schedule and continues to spiral toward the eye of the storm. With the NBA resolute in its decision and players only weeks from taking the court July 15 for training camp and the season on July 31, we ask five important questions facing the league.

1. Are the health risks worth it?

The uniqueness of the coronavirus pandemic is hammered home every day. What we originally thought about the virus is not true today, and what we think about it today could be different tomorrow. No longer are only people with preexisting conditions or the elderly affected. The number of cases, which appeared to be on the down slide during mandatory quarantine, have started to uptrend as states open retail businesses, restaurants and bars. The NBA is aware of the heightened stakes, as Silver told Bleacher Report’s Howard Beck.

What the NBA will attempt to pull off is unique. Shuttling hundreds of players, coaches, league personnel and their families into a semi-quarantined space and attempting to keep the virus at bay is a tall task, and we won’t know the potential consequences of such a bold attempt until the NBA arrives in Orlando.

What we do know is that the virus has killed more than 120,000 people in the U.S., and that number could approach 180,000 by Oct. 1. And these numbers come with many people quarantined and respecting social distancing. Basketball is a contact sport. Quarantine protocols are in place, including plans for rings that detect a fever, but many athletes who have contracted the virus have been asymptomatic, including the Utah Jazz’s Donovan Mitchell at the early stages of the pandemic and the Indiana Pacers’ Malcolm Brogdon on Wednesday. In total, 16 of 302 NBA players tested positive for the coronavirus.

Mitchell quarantined and received a negative test, and Brogdon intends to do the same before entering the NBA bubble, but how will this work once players and their families are in the bubble? Once they begin to touch each other during games? When positive tests circulate? That will be the true test. Keep in mind: Black people have been disproportionately affected by COVID-19, and the NBA is a largely Black league.

2. What part do economics play in this?

Money is a factor. The NBA is a billion-dollar industry with sponsorships, television contracts and stadiums to fill. The league’s courageous stand to suspend the season in March meant an immediate hit to that revenue, and they no doubt want to replace the losses incurred in the last 3½ months.

One look around the country reveals that attempts to return to the old normal is rooted in economics loss. The NBA has a budget just like any corporation, and it only can stand to lose so much money before the effects of shutdown are felt.

The NBA’s decision to push forward is at least partially rooted in that economic reality. The signs are pointing toward a potential second wave of coronavirus in the fall. The NBA already is experiencing new cases, including Brogdon and the Kings’ Buddy Hield, Alex Len and Jabari Parker. Those four players were part of a record 36,358 new positive cases Wednesday.

3. How will players support the Black Lives Matter movement?

The start of the pandemic, which in theory meant fewer people on the streets, didn’t slow the police killings of Black people in America. That was not lost on NBA players in a largely Black league. Kyrie Irving and Dwight Howard spoke on the issue on a conference call and discussed the potential of basketball becoming a distraction. Former NBA player Stephen Jackson, who was a friend of George Floyd, echoed that sentiment.

Other players and media members contended sitting out would pass the microphone and relinquish a major platform. NBA legend Charles Barkley was among them, asking players to do Silver a solid for past support. For his part, Silver supported player protests after police killed Eric Gardner and took decisive action when former Los Angeles Clippers owner Donald Sterling was recorded making racist remarks.

That said, this time feels different for many, which could be the case for players grappling with trauma from seeing Black people treated callously with little recourse. Players have agency and will have to reckon with their feelings and final decision as individuals.

So far the NBA and NBPA presented one option for players, allowing athletes to replace the last name on their jerseys with a social justice statement, according to The Athletic’s Shams Charania.

4. Will more players sit out the season?

NBA players have concerns about the coronavirus and taking away from the Black Lives Matter movement, suggesting that they could decide to sit out of the league’s return. Irving notably was quoted as saying, “I’m willing give up everything” for social reform.

The first players to drop out of the restart, however, decided not to take part because of what they weren’t willing to give up. The Los Angeles Lakers’ Avery Bradley and Portland Trail Blazers’ Trevor Ariza will sit out for family reasons, and the Washington Wizards’ Davis Bertans decided not to play because of past ACL injuries and looming free agency. The NBPA told players they will not face repercussions for sitting out.

Bradley, Ariza and Bertans are unlikely to be the last players to decide not to play. As we close in on the restart, the number of positive coronavirus tests is sure to increase. And the need for strong voices on police reform is unlikely to go away anytime soon.

5. What should we expect from a quality standpoint?

The last NBA game before the coronavirus shutdown was played on the night of March 11. In the weeks and months since, many players struggled to find opportunities to work out or play competitive basketball. When players enter the Orlando bubble, they will have a two-week training camp before jumping back into the season.

Players will need time to accept life in the bubble, get back in a groove on the court and become accustomed to playing in a neutral site with no fans. There could be hiccups, surprises and injuries. The media and fans will need to be patient.