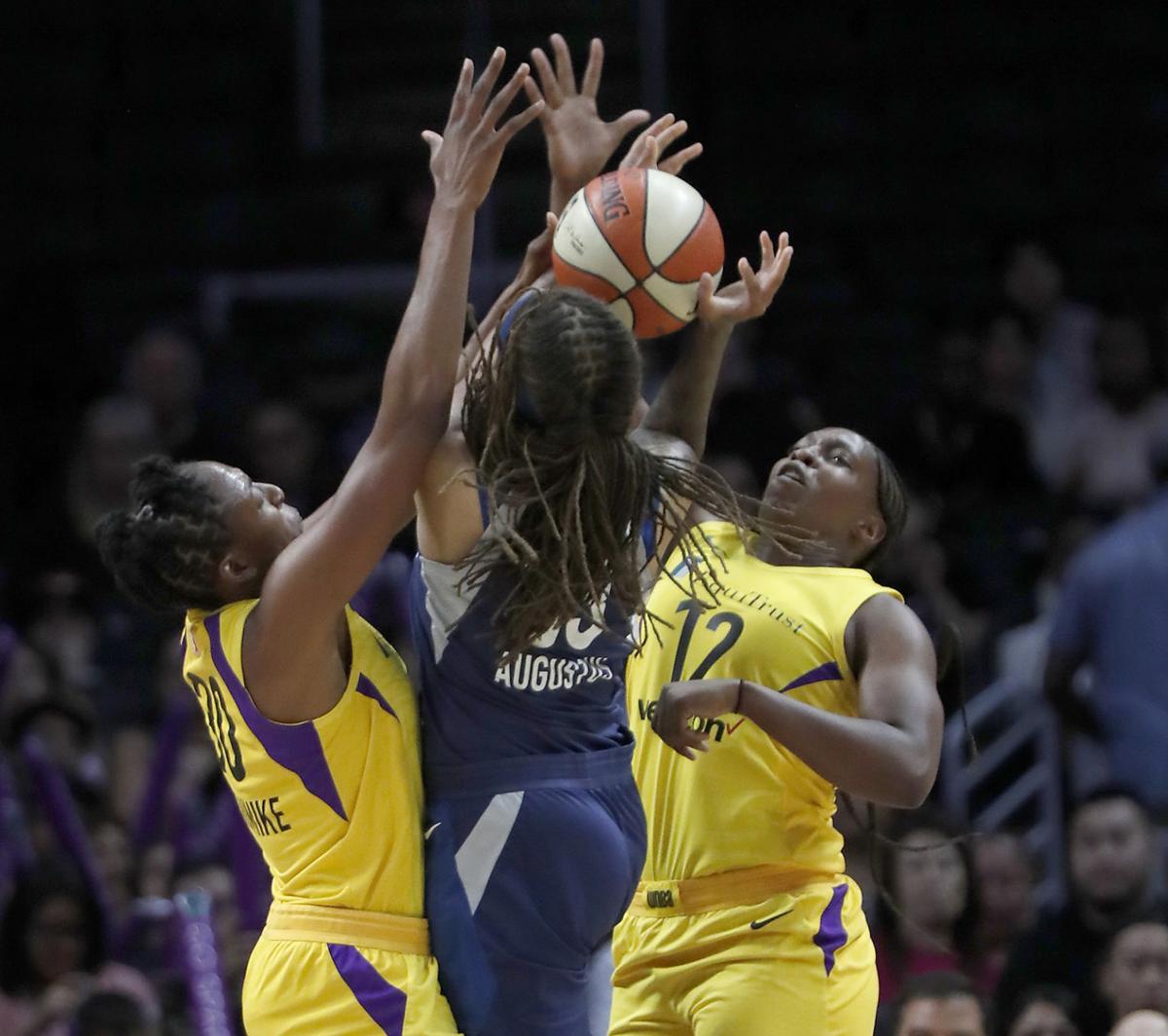 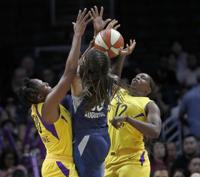 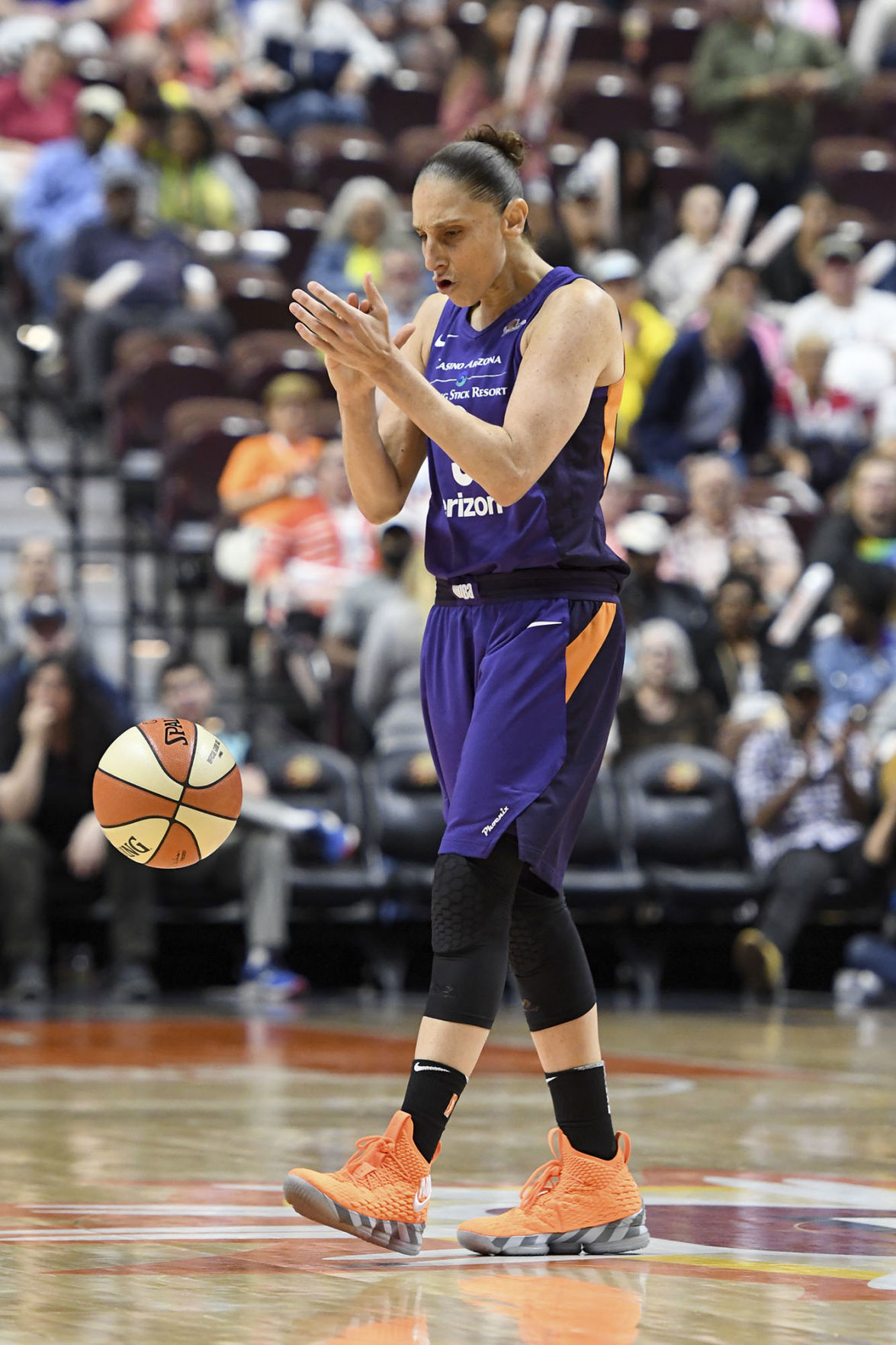 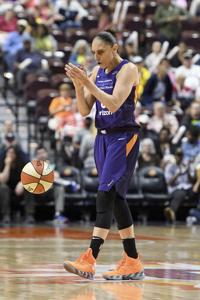 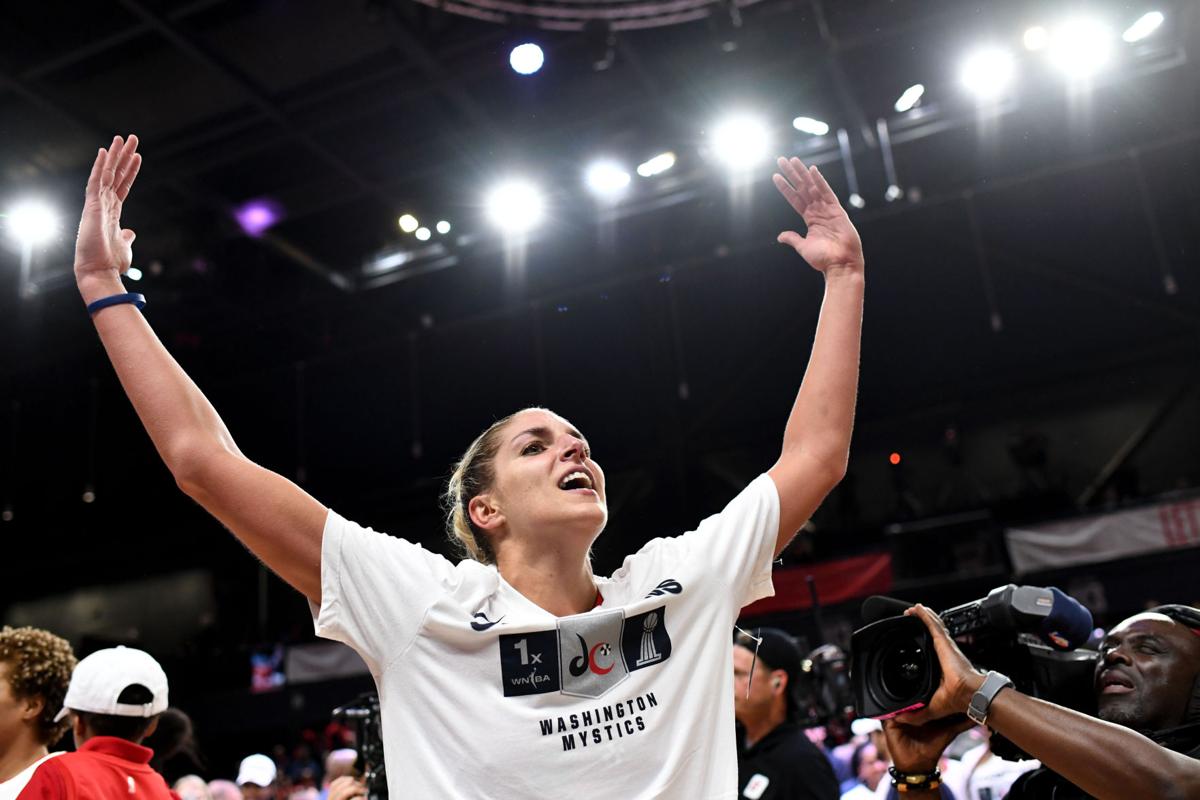 ALL AROUND GAME: Elena Delle Donne, the reigning league MVP, finished with 21 points, a team-high nine rebounds, two assists, two blocks and a steal without committing a turnover in an 89-78 win against the Connecticut Sun, leading Washington to the WNBA title. Katherine Frey/The Washington Post 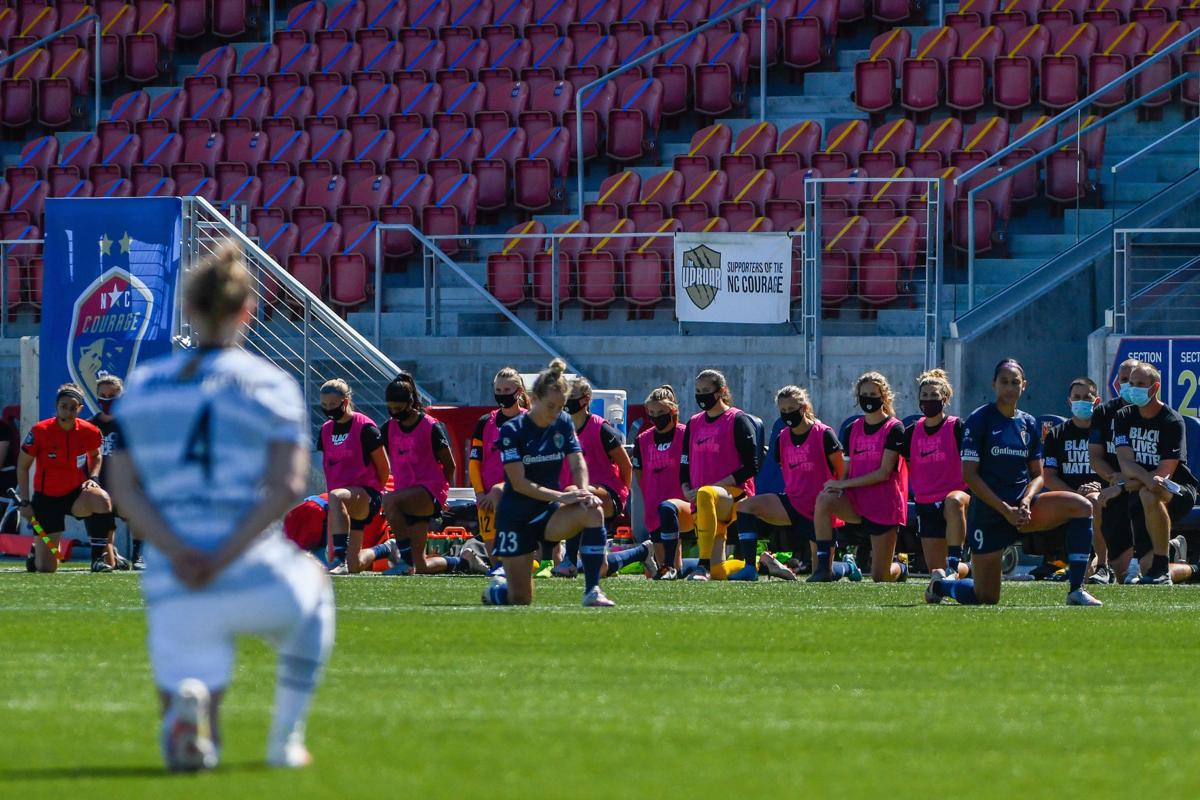 MAKING A STATEMENT: Players from the North Carolina Courage and Portland Thorns FC knee out of respect for the Black Lives Matter movement during the first round of the NWSL Challenge Cup at Zions Bank Stadium in Herriman, Utah, on Saturday, June 27. Alex Goodlett/Getty Images/Tribune News Service

ALL AROUND GAME: Elena Delle Donne, the reigning league MVP, finished with 21 points, a team-high nine rebounds, two assists, two blocks and a steal without committing a turnover in an 89-78 win against the Connecticut Sun, leading Washington to the WNBA title. Katherine Frey/The Washington Post

MAKING A STATEMENT: Players from the North Carolina Courage and Portland Thorns FC knee out of respect for the Black Lives Matter movement during the first round of the NWSL Challenge Cup at Zions Bank Stadium in Herriman, Utah, on Saturday, June 27. Alex Goodlett/Getty Images/Tribune News Service

The WNBA and NWSL are the two most prominent women’s leagues in the country. Despite still being so new to the national landscape, they continuously make headlines, turn heads, capture hearts and captivate new fans.

The very existence of these leagues is vital to the continued progress our country so desperately needs when it comes to gender equality.

“As one of the longest standing women’s professional sports leagues in the United States and going into our 24th season, I think it’s important that we stand for more than just professional basketball, but the power of women,” WNBA Commissioner Cathy Engelbert told the Daily News in April.

Liberty veteran Layshia Clarendon and Washington Mystics veteran Natasha Cloud both penned essays in The Players’ Tribune about their thoughts on the current Black Lives Matter movement and how it’s affecting BIPOC athletes. Pride month has always taken center stage. Players have opted out of the current bubble season plan just to continue fighting for human rights. While the league has dragged its feet on dealing with prejudiced team owner Kelly Loeffler, the players have been united in calling for her ouster.

All players from the North Carolina Courage and Portland Thorns took a knee during the national anthem and wore “Black Lives Matter” T-shirts before the start of the NWSL’s first match back from the coronavirus hiatus. The OL Reign created a video explaining social and racial privilege and posted it to their Twitter page. All the Sky Blue players pledged to donate money to the New Jersey Institute for Social Justice after every goal scored in the Challenge Cup.

These are just a few examples from the last two months in both these leagues. Considering they’re the two youngest major sports leagues in the country — the NWSL is just in its eighth season — they’ve proved not only is their very existence revolutionary, but so is what they stand for.

The WNBA is only about where the NBA/ABA was in the 1950s, as one sports economist explained, which only speaks to how much more growth there is to come and how much more these leagues will have to offer in the future.

“Their importance is their value in the future and the opportunities they create.”

Those opportunities, like women having the very real option of being able to be a professional athlete, the general manager or head coach of a professional team, or even the commissioner of a league.

And in leagues so new that the only way to go is up, the possibilities seem endless. Those involved take great care in understanding the weight of the power they hold.

“It’s cliche that it’s so much bigger than sports for me personally,” Sky Blue GM Alyse LaHue told the News in April. “Yes, selling tickets and increasing the fan base is important, but there’s a bigger picture.

“I want to show young women and girls that you can be a general manager and that should be a career choice and you should have the opportunity to do that. … We have to do better. I take a keen responsibility in making sure other women, other girls know that this is something you can aspire to.”

And for every role model out there, and every new one made, there’s another awakening. Another child, tween, teen and beyond will know the world is better when it’s not run by the patriarchy. That girls and boys are exposed to different, equally qualified and quantified faces.

The fact these leagues can sell merchandise — Sky Blue sold over $30,000 in merchandise last month on the first day the team’s new jersey went on sale — or pay their own players a more equitable amount — WNBA’s average salary hit six figures in the latest CBA deal struck in January — speaks volumes.

Engelbert, named WNBA commissioner in 2019, was hired in large part for her ability to improve the league’s financial footing. The former CEO of Deloitte helped secure new corporate sponsors for the league, including AT&T and Nike.

It’s a challenge, but also an opportunity.

“Only 1% of all global corporate sponsorship dollars are directed toward women’s sports,” Engelbert said six months ago.

Plenty of room for growth.

For all the naysayers declaring no one cares about women’s sports, in 2017 the WNBA had its highest regular-season attendance and in 2018 it had its most-watched season in four years, according to data provided by the league. In 2019, the popular NBA 2K videogame was released and included WNBA rosters for the first time.

This year’s WNBA draft, the first major league to hold an all virtual one, saw its second biggest television audience. Over social media, the W’s content was consumed 125% more on draft day than last year.

NWSL teams, highlighted by Sky Blue, saw increases in fan attendance at games to the end of the 2019 season. Sky Blue, led by LaHue in a grassroots campaign last season, went from having 2,000 fans for games at Rutgers University to having 9,415 fill the lower bowl of Red Bull Arena by the end of 2019 and being able to make the move to the soccer-specific stadium permanent.

The NWSL’s opening game of the Challenge Cup last month drew a league-record audience on CBS (average audience of 527,000 viewers). By far the biggest audience to watch a women’s pro soccer game on TV. In comparison, the MLS is Back tournament opener earlier this week drew an average audience of 464,000 on ESPN.

The league still has plenty of work to do as only one more game is scheduled for network TV, while the rest of the games are relegated to CBS All Access.

But let’s not forget, again, these leagues are still relatively new. So of course they’re not going to have the same fan base as the established men’s leagues (NFL, NBA, MLB and NHL).

“You can’t inherit sports fandom if there was nothing to inherit prior,” Berri told the News. “If you don’t have any experience with the league, you don’t have any attachment. We are impatient because we expect fans to come instantly. It’s like with the minor league football league. You can’t just make fan attachment happen, you have to be patient.”

Creating a fan base takes time. In the 1920s people laughed at the idea of having a professional football league. But much like it took decades for the NFL to really gain traction — also remember NBA playoffs weren’t always broadcast live until the mid ’80s — here we are expecting a finger snap and women’s leagues to be exactly where the men’s leagues are.

There’s also the people who are just plain sexist and want to watch the world burn.

“There’s always going to be a level of disrespect until society changes the way they view women, which hopefully will be sooner than later,” Sabrina Ionescu, the No. 1 overall draft pick by the Liberty in April’s draft, said after the draft.

The very existence of women’s leagues is a movement in its own right, not just a moment in time. Sexism, racism, a pandemic, you name it, they’ll face it. Why? Because women have always had to fight for everything they’ve ever gotten in sports.

Coronavirus isn’t going to destroy any of the momentum women’s sports have built. If history has anything to show for the success of major pro sports leagues like the WNBA or NWSL, it’s that their story is only still just beginning.