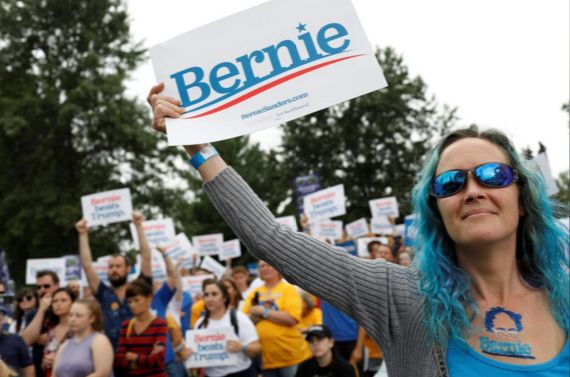 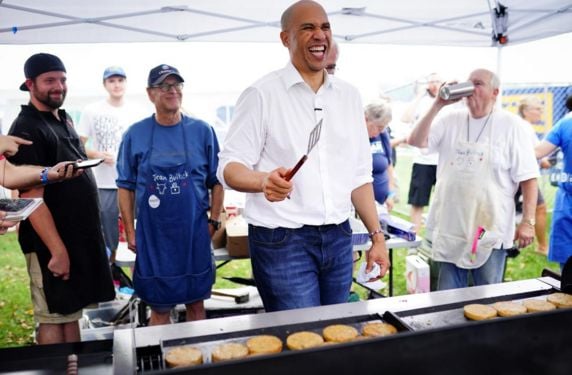 DES MOINES, Iowa — The state of the 2020 race played out Saturday at the Polk County Steak Fry in Iowa.

Joe Biden, the Democratic front-runner, was mobbed by voters and reporters as he marched with supporters behind a firetruck that was accompanied by a drumline.

Elizabeth Warren was greeted on the main stage by thousands of her signature “liberty green”-colored signs and chants of “2 cents” in support of her proposed 2% tax on the assets of people worth $50 million or more.

Pete Buttigieg, standing in front of the bus he will ride across the state, addressed hordes of supporters in new, yellow “Pete for Iowa” shirts. Bernie Sanders, who consistently polls second or third in the race, spoke but had a limited presence.

Biden’s mob weaved past a small gaggle of voters around Kamala Harris. The only people trailing Cory Booker were reporters who wanted to ask more about his statements earlier Saturday suggesting he might drop out in the coming weeks.

The Steak Fry, a signature event on the Democratic calendar, featured all the hallmarks of Iowa politicking: candidates grilling steaks, posing for selfies and marching with supporters. Each of the 18 candidates also spoke for about 10 minutes, mostly abbreviated takes on stump speeches.

But with more than 12,000 Democrats there, all signs pointed to a tightening top tier of candidates, and those below that signaled they were shifting gears in what could be last-ditch efforts to keep their campaigns afloat.

Buttigieg, who has so far been unable to match his fundraising prowess with polling success, had more than 1,000 supporters across the sprawling park grounds.

Booker and Harris, on the other hand, used the Steak Fry to indicate they were shifting gears.

Booker’s campaign announced Saturday it needed to raise $1.7 million in the next 10 days or the campaign would have to make some “tough decisions.”

“The fourth quarter is a time of growth and I don’t believe people should stay in this just to stay in it,” Booker said. “You either have a trajectory to win or not and right now if we don’t raise $1.7 million we won’t be able to make the investments necessary.”

Booker expressed confidence that he still might have a viable path to the nomination.

“Let’s be clear: This race isn’t solidifying at all,” he said. “Over 90% of Democrats say they have not made their definitive, final choice and we know from the history that polls have never, in my lifetime, predicted who would become the president from our party.”

Harris’ campaign, faltering in the polls, said earlier this week it would be making a big bet on Iowa, a marked shift from her earlier focus on South Carolina, the third nominating contest in the country with a majority-black Democratic voting base.

“I don’t know if y’all heard, but I’m moving to Iowa,” Harris joked on Saturday.

The Harris campaign said it would double their organizers to 120 from 65 and that the California senator would visit the state every week. The goal is for a top-three finish that would “slingshot” her from Iowa forward, Juan Rodriguez, Harris’ campaign manager, said Thursday.

“There were differences” in the approaches of the top-tier and lower-tier campaigns, said Joshua Darr, a professor of political communication at Louisiana State University who was at the Steak Fry. “Little things that were clear evidence that some campaigns need to make this work for them and other campaigns just showing up and saying, ‘We’re still here.’”

Other low-polling candidates said they still have time to make up ground with the Iowa caucuses still 130 days away.

“When I’m out talking to people here or elsewhere, voters haven’t hardened and made their decision and I think there’s still a lot of time in this,” Montana Gov. Steve Bullock said.

But attendees at the Steak Fry say they already see clear front-runners and doubt others can break out of the pack.

“You can see the front-runners already developing if you just look around,” said Emily McCarthy, a 36-year-old waitress from Des Moines who is still deciding between Warren and Sanders. “It’s obvious in the crowd when you look at the crowd and the energy here and the people that are vocal about who they are here to support.”