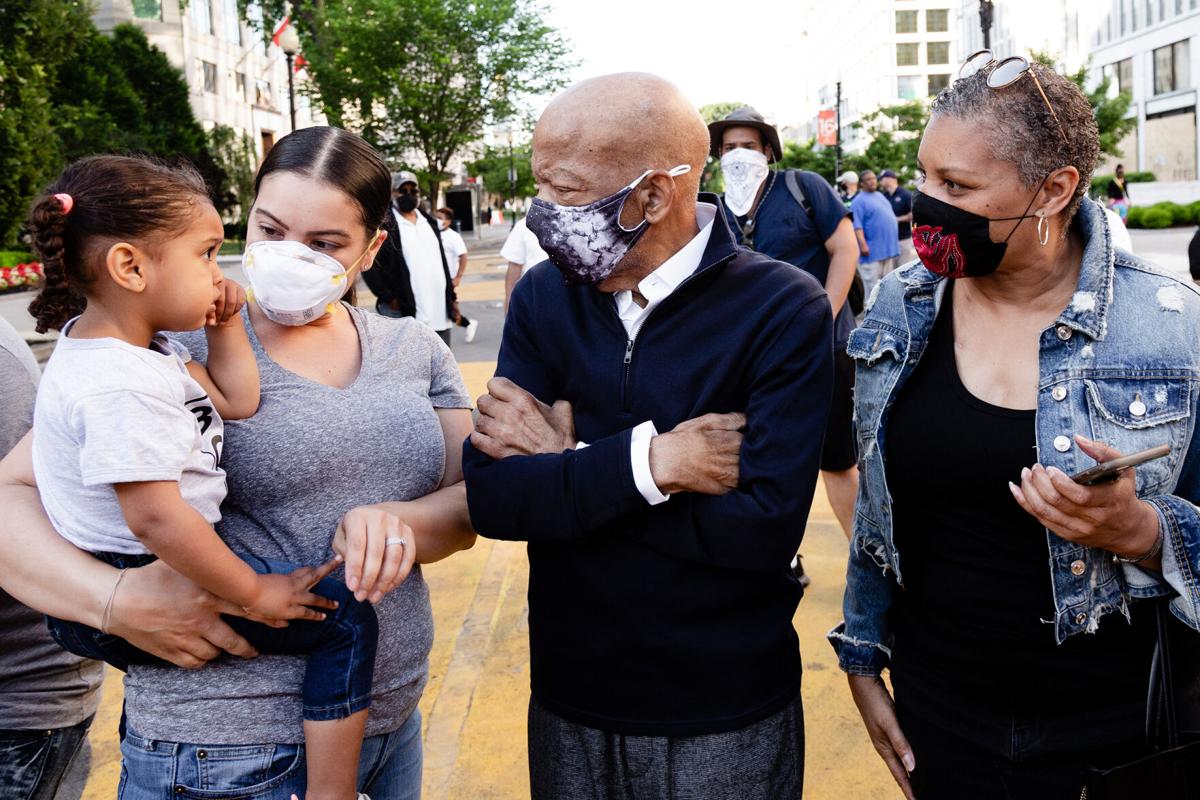 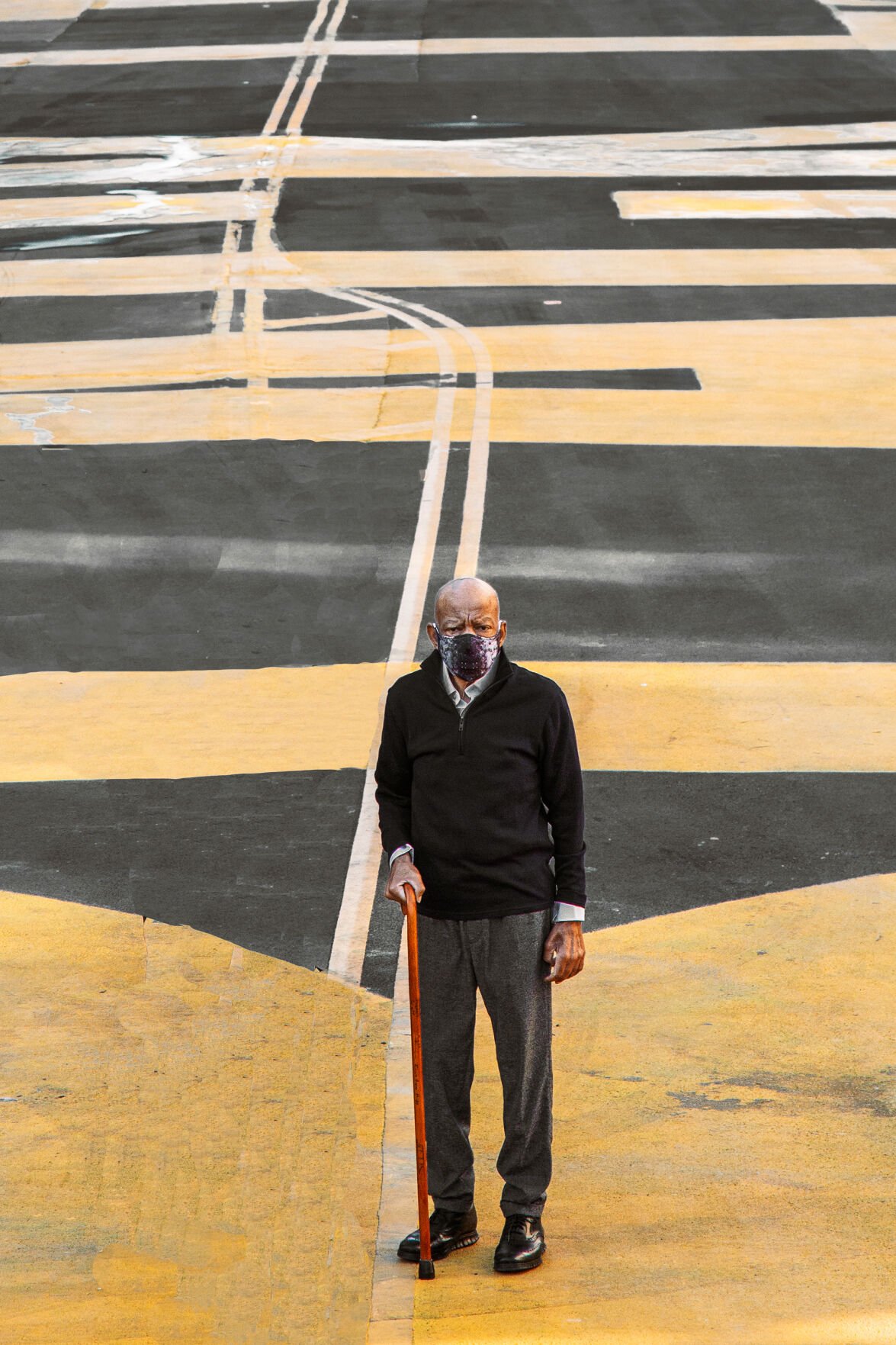 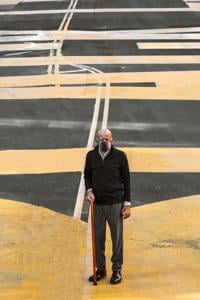 Those photographs of him overlooking the District's Black Lives Matter Plaza, 57 years after he'd been the youngest speaker at the March on Washington, were meant to be snapshots of a private moment as the civil rights hero looked out on the newest manifestation of a movement for Black freedoms that he'd shed his own blood to advance decades ago.

Photographer Gary Williams Jr. had been quarantining with his parents, his wife and their two young children in Virginia that first weekend of June when an unexpected message appeared in his email. It was from Lewis's chief of staff, Michael Collins, asking if he'd be available to photograph the congressman the next morning. "I'm thinking, this is a press thing," Williams said. But it was quieter than that. Washington's mayor had authorized city workers to write the words "Black Lives Matter" in bold, yellow letters on a stretch of 16th Street NW near the White House. Lewis wanted to see it for himself.

"It was a personal moment," Williams said. "He just wanted some photos to document his visit."

The plan was to go first thing in the morning, before the crowds. Just the three of them: Lewis, Collins and Williams, a 38-year-old co-founder of a Black-owned D.C. creative agency. But Williams wanted to give Lewis a bird's-eye view of the mural, and had to enlist the help of friends in the mayor's office to get access to a rooftop that wasotherwise closed due to covid-19. The personal moment became moreceremonious.

Lewis had gone through a round of chemotherapy the day before, Collins told Williams, and he would be admitted to the hospital the following day. He leaned on a cane and wore a cap that read,"1619"and "400 years." As he walked to the edge of the roof, everyone got quiet.

"He didn't say anything, and with his mask on it was hard to read his facial expression, but you could see it in his eyes that this was a moment of reflection," Williams said. "And I kept saying to myself as I'm taking these photos of him, 'I wonder what he's thinking.' " ("I just had to see and feel it for myself," Lewis wrote in an essay for the New York Times, published after his death, "that, after many years of silent witness, the truth is still marching on.")

Behind the camera, Williams was having his own reflective moment. He'd learned about John Lewis from his own parents, as they told him stories of racism they'd experienced growing up in Virginia and Delaware in the '60s and '70s. His father, Gary Sr., told him about the time one of his friends dared to walk down a stairwell where the White students hung out. "One of the White gentlemen just punched him and knocked him out," says Williams, starting a near brawl. "My dad just told me that to share what he had to go through every day at school just to push through and get an education. That was the hostile environment he had to learn in."

John Lewis had been beaten up regularly for entering White spaces: Attacked for entering a Whites-only area at a bus station in Rock Hill, S.C. Hit in the head with a wooden crate and left unconscious at another bus station, in Montgomery, Ala. Getting his skull cracked by police while marching across the Edmund Pettus Bridge in Selma, Ala., on "Bloody Sunday."

Williams's mother, Chrystal, made sure her son read up on Lewis and other leaders of the civil rights movement, not just to know his Black history, but, he says, "to know that there are folks who put their lives on the line so that life could be better for others." Selflessness, he says, was a lesson his parents were always trying to impart, that the world didn't revolve around him. "And John Lewis made the ultimate selfless act," Williams said, "being beaten within an inch of his life and deciding to get back out there and continue fighting for the civil rights movement." It was a lesson he hoped to teach his 2-year-old daughter and infant son when they grow old enough to understand. "Even to this day my parents stress how important it is to continue to do the work," he said, "whether it's in-the-street protests or a simple act of voting."

Lewis said he wanted to walk on the plaza itself. Down on the street, people began to recognize him, including city workers who were maintaining the paint on the plaza. City workers driving by on a garbage truck stopped and let Williams and another photographer climb through the trash to the roof and take some overhead shots of Lewis. Lewis spent 45 minutes taking photos with the workers and anyone else who wanted one.

People came up to thank him, or tell him that they loved him. When a reporter asked Lewis how he felt, he replied, "The people in D.C. and around the world are sending a powerful message that we will get there."

Williams kept it together as a professional until Lewis took a photograph with his 2-year-old daughter, Maevyn. His wife, Dvon, had been holding onto her the whole time, having broken their months-long isolation to tag along on the assignment, along with Williams's mom. (Gary Sr. had stayed in Virginia to watch Williams's 8-month-old son, Canon.)

When Maevyn is old enough to understand, Williams plans to tell her who John Lewis was and what he did - not just for the country, but for Black people specifically -and what he proved possible: that "if we can endure those hardships and challenges, there is light," Williams says. "There is progress on the other side." On the same day Lewis saw "Black Lives Matter" painted on the streets of Washington he also met Maevyn, and Williams had been able to capture the moment when their lives briefly touched.

Williams thought about Lewis's life and how he would explain it to his daughter. "I'm so happy for the life that he led, because if it wasn't for him, this Black Lives Matter movement now might not have been possible," he said. "I will tell her that he fought for what he believed in and he did it courageously and he did it bravely, and I will tell her that we need to have that same kind of courage and bravery for the things that we stand for and the things that we believe in."

He imagined a photo of the two of them ending up in the National Museum of African American History and Culture, or in a textbook.

"That's when I started to tear up," he says.