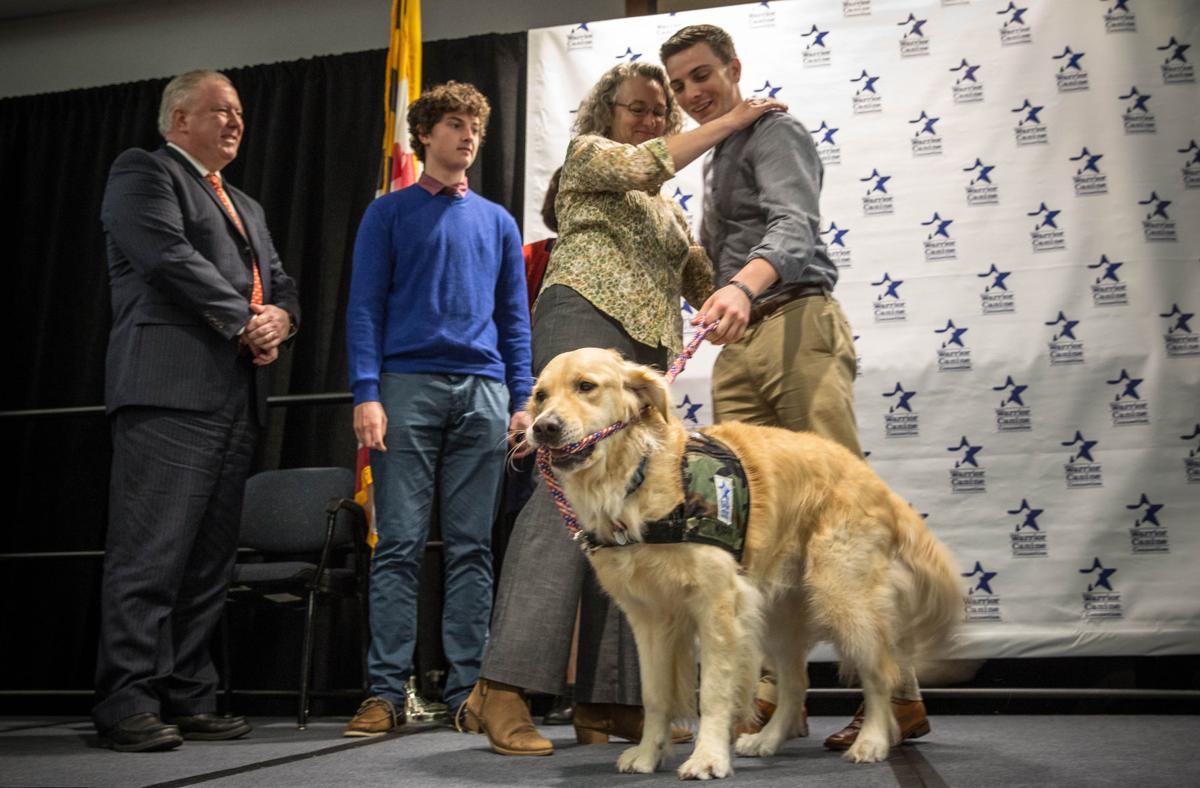 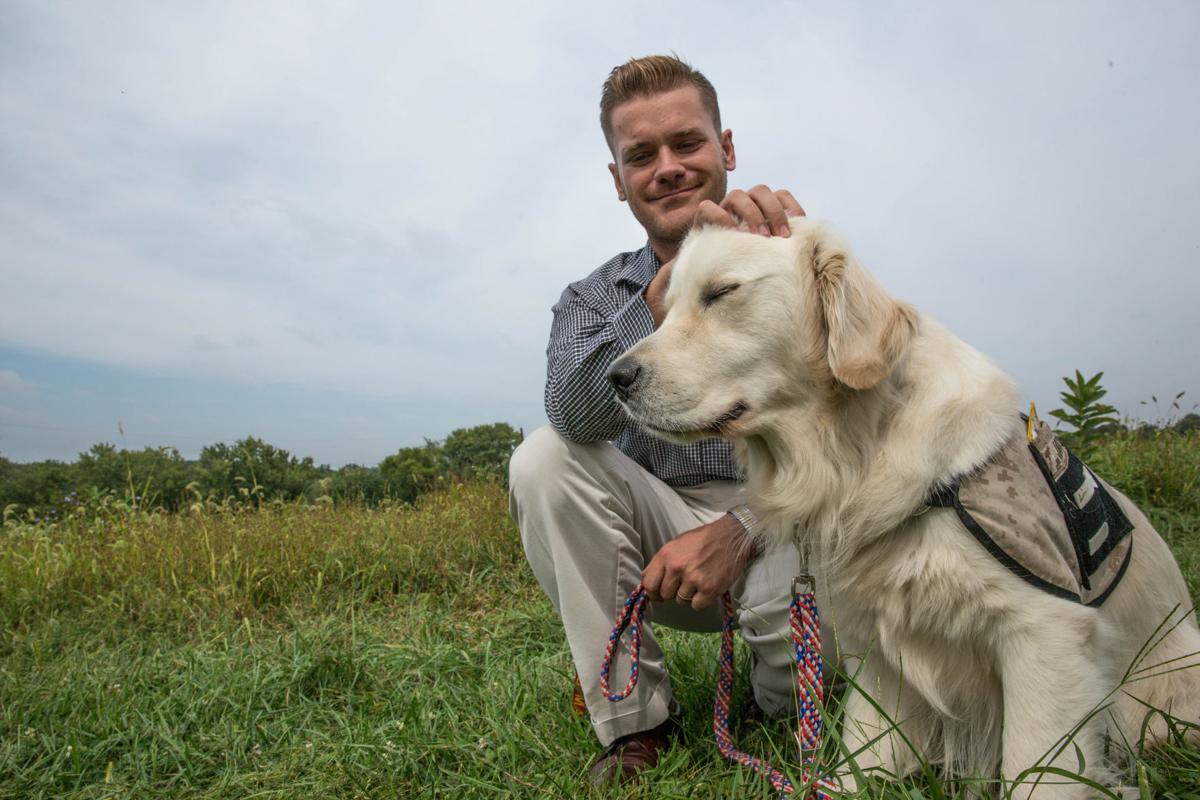 Matt Moores, a retired Marine sergeant, with his service dog, James, at the Warrior Canine Connection in Boyds last month. Evelyn Hockstein for The Washington Post 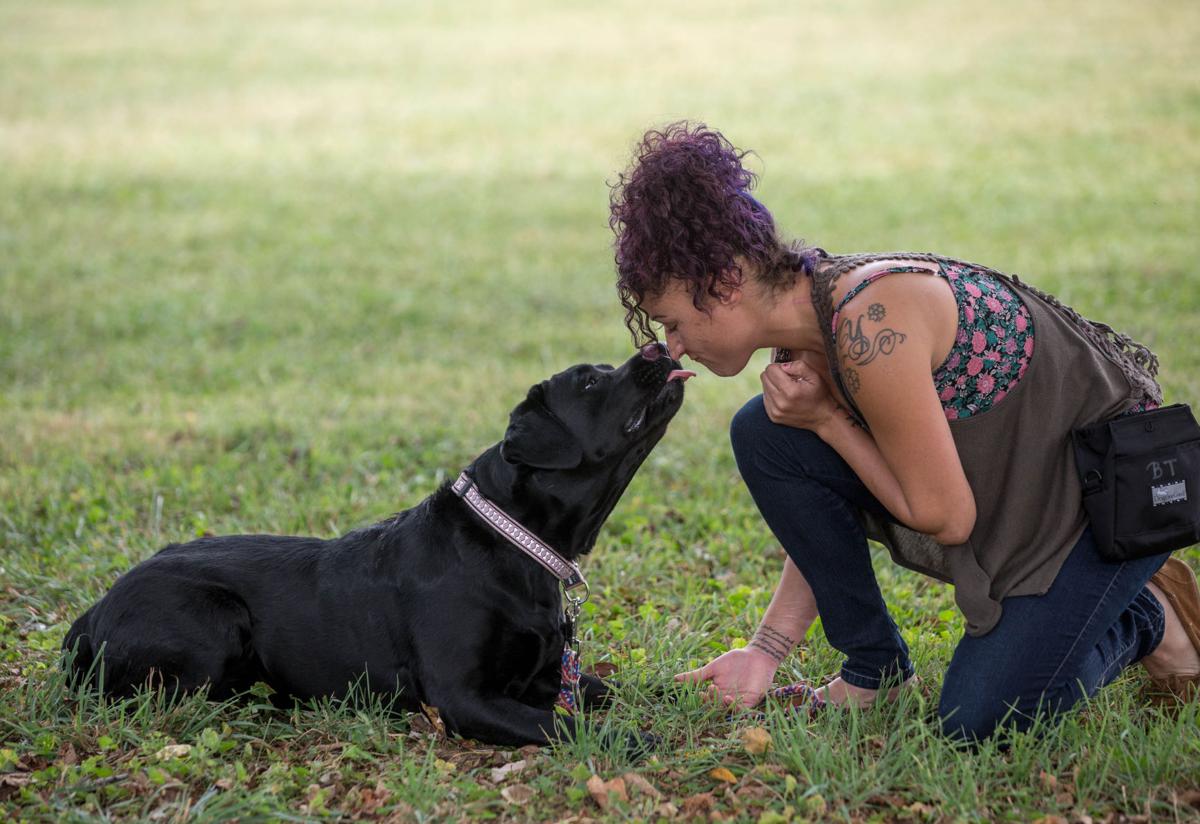 Matt Moores, a retired Marine sergeant, with his service dog, James, at the Warrior Canine Connection in Boyds last month. Evelyn Hockstein for The Washington Post

At a dinner outing with his wife, Julie, at Fleming's Steakhouse in Baltimore, Garrison was growing nervous, clenching his hands. Being in public spaces had been a problem for the veteran since his return from Iraq, where he fractured two disks in his spine escaping a grenade blast in 2007.

On that March night at the restaurant, his English black Labrador, Luke, nudged him.

"What's wrong?" wondered Garrison, 39, who retired from the Air Force in June as a staff sergeant. Normally reserved on these outings, Luke sprang up between Garrison's legs and looked him in the eye, "like, 'Hey, look at me.' "

"All of a sudden, my light bulb goes off, like 'Hey, my leg's bouncing. I'm having an anxiety attack,' " Garrison said, recalling how his new companion eased his nerves.

On Saturday, Garrison and his wife joined dozens at a graduation ceremony for Luke and nine other pooches, service dogs who went through a rigorous, two-year training regimen to serve as companions for veterans overcoming the stress of combat.

Volunteers train the puppies from when they are eight to 10 weeks old until they reach age 2, when they go to live with veterans.

After being paired with Luke in March, Garrison – who recently received a diagnosis of post-traumatic stress disorder – saw a marked drop in the anxiety attacks that had been a twice-a-week affair. Now, he said, he's more confident venturing out, going to restaurants and buying groceries.

Saturday's event in Rockville, Maryland, marked the fourth graduation exercise for Warrior Canine Connection (WCC), which uses dogs to help wounded veterans reconnect with daily life. The floppy-eared graduates were treated to all the commencement hallmarks: a speaker, the ritual playing of "Pomp and Circumstance," hugs and kisses from the volunteers who reared them, and some crying in the crowd.

Julie Garrison broke into tears as she described Luke's impact. The stress of combat and chronic pain had led to bouts of "blind rage" in her husband, she said, but Luke had all but erased them.

Her husband's "dry wit that I fell in love with six years ago has returned, thankfully," she said. "It's just joyful now. Because of that soft presence of Luke."

In his keynote remarks, Robert Koffman, a physician and retired Navy captain who is the organization's chief medical adviser, praised canine therapy as "a means of coaxing emotion back into the warrior's soul forever robbed by combat of its naivete, and whenever possible whispering a whistle of childhood and innocence back into the hearts and minds and the souls of our wounded veterans."

"Dogs are good medicine," he added.

Rick Yount, the WCC's executive director, marveled at "the amazing healing power of the human-animal bond."

Retired Marine Sgt. Matt Moores described the pairing in a different way: "It means everything."

Moores suffered a broken back and brain trauma in 2013 on his second deployment to Afghanistan – career-ending injuries, he learned on his return.

"I was in a really bad place," said Moores, 32, of Germantown, Maryland. "Being with my men, training them, living with them – you know, there's a real special bond, and it was something that I felt like was taken from me. That was going to be the rest of my life. When I lost it, I felt like I had lost everything."

But meeting his golden retriever, James, now 2, changed his outlook, he said. He gained the confidence to interact with psychiatrists and medical staff, and had a tail-wagging companion in life.

At the graduation, James – apparently struggling to contain his excitement – shimmied up the stage with "puppy parents" Billy and Debi Isenstein, then leapt into Moores's arms.

James was named for Army Chief Warrant Officer 3 James Groves III, who was killed when his helicopter crashed in Afghanistan in March 2013; members of his family walked onstage with Moores.

From birth, the dogs are reared for a career in service, said Cheryl Bingham, the "Puppy Parent" program manager. At three weeks, they start learning basic commands. At eight to 10 weeks, they are handed off to volunteer caretakers, who ferry them to weekly training classes, practice commands and fine-tune their social skills.

The most advanced training ground, Bingham said, is a familiar obstacle course for hundreds of thousands of District of Columbia residents: Metro.

"That is the king of all our training places," she said. "Everything, from the noises, the smells for the dogs, the escalators that are just atrocious compared to anywhere else, the people that will run you out of your way because they're going home – that is just insane. They'll step on the dog. You work your way up to that."

At the ceremony, another service dog, a 2 1/2-year-old golden retriever named Bob, climbed the stage to meet Lt. Tom Mielke, 64, of Lothian, Maryland, a Coast Guard regulations attorney who received a diagnosis of multiple sclerosis connected to his service.

When Mielke drops pens, glasses and credit cards, Bob is quick to pick them up. He can flip light switches, too.