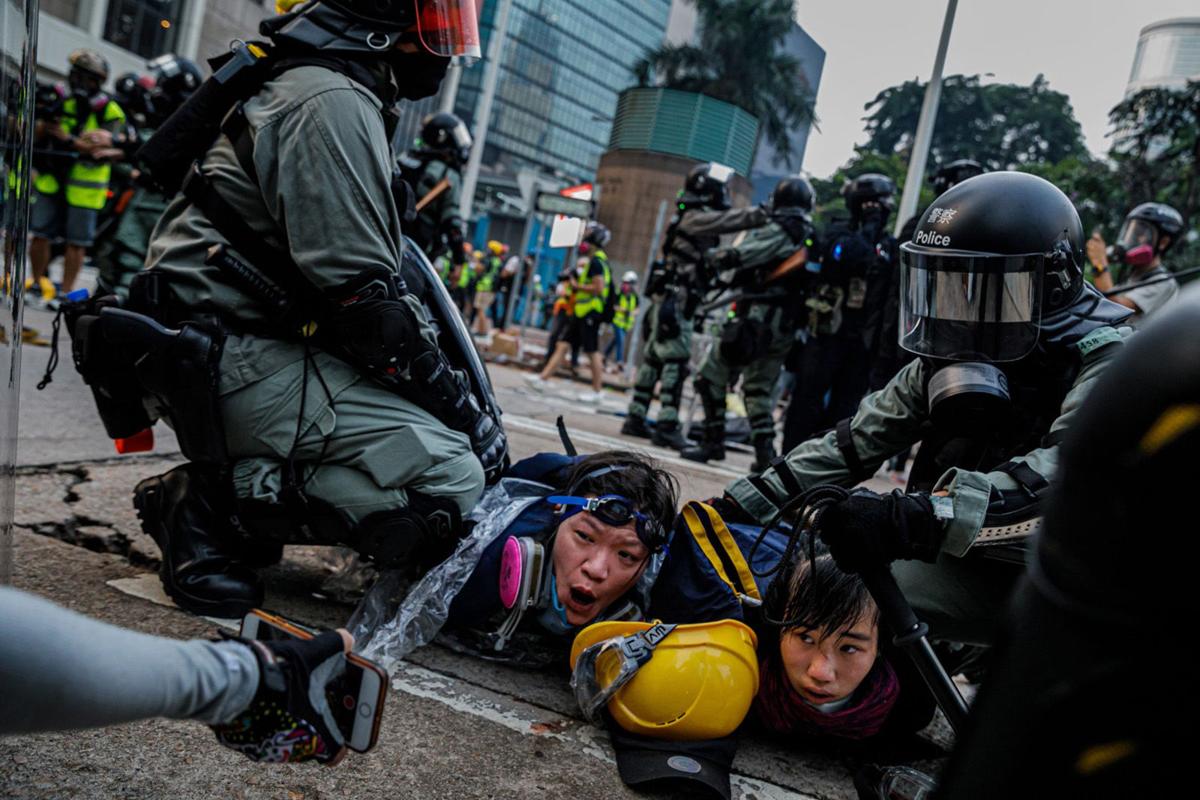 NO AUTONOMY: In this file photo, police officers in riot gear pin down young female protesters as they confront demonstrators with tear gas, batons and shields and make mass arrests near the HK Police Headquarters as chaos grips the city leading up to China's National Day in September, 2019. By imposing a new national security law on Hong Kong, Beijing signaled its determination to squelch a fierce anti-China protest movement. Marcus Yam/Los Angeles Times/Tribune News Service 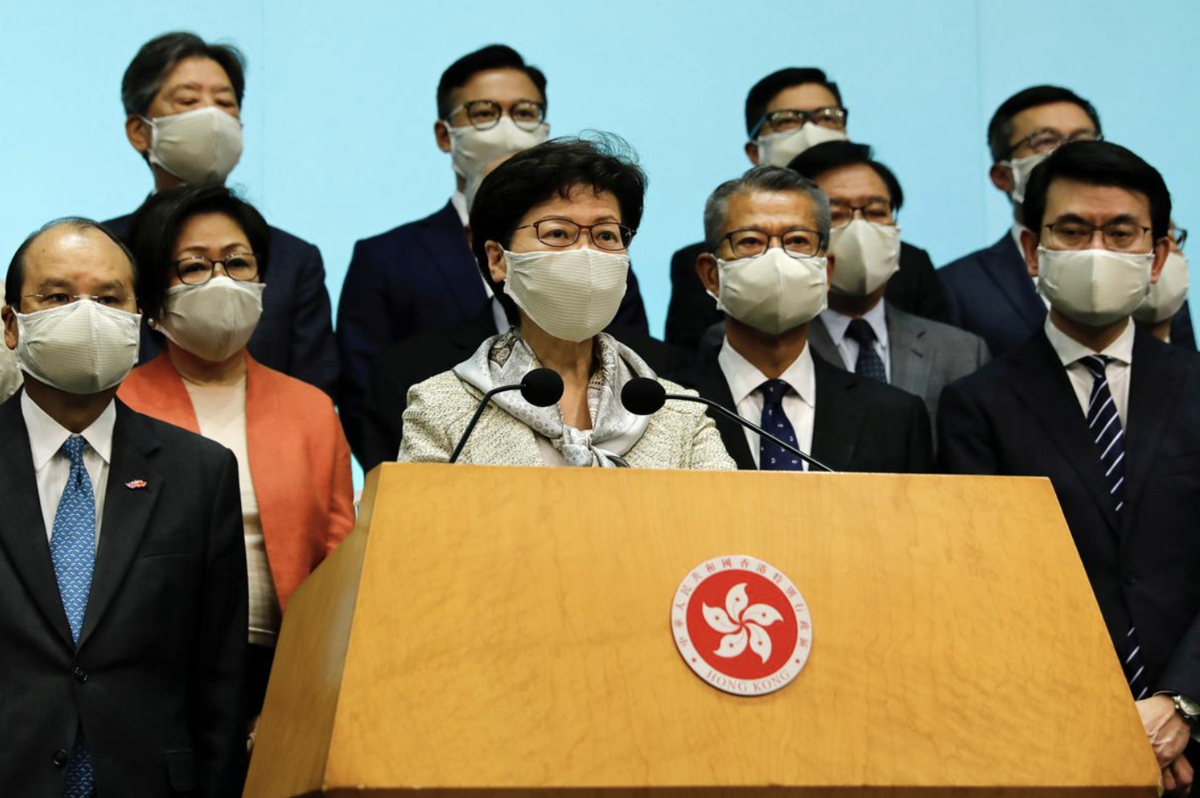 NO AUTONOMY: In this file photo, police officers in riot gear pin down young female protesters as they confront demonstrators with tear gas, batons and shields and make mass arrests near the HK Police Headquarters as chaos grips the city leading up to China's National Day in September, 2019. By imposing a new national security law on Hong Kong, Beijing signaled its determination to squelch a fierce anti-China protest movement. Marcus Yam/Los Angeles Times/Tribune News Service

SHANGHAI – With its COVID-19 outbreak waning, nationalism rising at home and its antagonists in the Trump administration preoccupied by the pandemic and election-year politics, the Chinese Communist Party is boldly moving to crush a dangerous obstacle to its authority.

By imposing a new national security law on Hong Kong, Beijing signaled its determination to squelch a fierce anti-China protest movement – and demolished the longstanding firewall protecting the high-flying territory’s human rights and freedoms from interference from the authoritarian mainland.

For Xi Jinping, the most powerful Chinese leader in decades, the strategy is yet another show of strength as he seeks to overcome accusations of mishandling the early days of the coronavirus outbreak late last year. After getting the virus under control but still dealing with its economic fallout, another summer of chaotic, headline-grabbing protests would mar China’s efforts to portray itself as a global leader.

It is a startling moment playing out against a resurgence of Chinese nationalism and a confidence by Beijing that – despite diplomatic consequences – it can assert its influence over a territory that for years has challenged its vision of domestic harmony.

The legislation would grant authorities broad powers to crack down on dissent and appears aimed at stopping fresh demonstrations as Hong Kong emerges from a months-long coronavirus lockdown. Critics call it a power grab that ends the autonomy that China promised Hong Kong would enjoy for at least 50 years when it took back the territory from Britain in 1997.

“The intensification of Beijing’s crackdown on Hong Kong is a sign that when the Chinese Communist Party feels its core interests are threatened, it is willing to take steps that were previously seen as unthinkable,” said Benjamin Bland, research fellow at the Lowy Institute in Australia and author of “Generation HK: Seeking Identity in China’s Shadow.”

The decision also creates another flashpoint in China’s deteriorating relationship with the U.S., one that many fear is edging toward a new cold war.

As the Trump administration and Chinese officials trade misinformation and insults over the origins of COVID-19, talks on resolving a bitter trade dispute have collapsed. U.S. law exempts Hong Kong from tariffs on Chinese goods imposed during the trade war, but last year, in support of the protests, the U.S. introduced a provision that would revoke Hong Kong’s special trade status if it loses its autonomy from mainland China.

American lawmakers from both parties have criticized the security law and called on the Trump administration to hold Beijing accountable. Secretary of State Michael R. Pompeo, who has delayed a decision on Hong Kong’s status, condemned the law Friday, calling it “a death knell for the high degree of autonomy Beijing promised for Hong Kong.”

“This will be a test of what the U.S. policy is now toward Hong Kong and toward containing China,” said Eliza Lee, a professor of politics at Hong Kong University. “Within Hong Kong there are people who are looking up and waiting for the U.S. to respond.”

But analysts say that Xi is gambling that Trump won’t enact sanctions or introduce new tariffs against China that could intensify the trade war and risk damaging an already weak U.S. economy just months before he seeks reelection.

“The U.S. will absolutely talk tough on China – and there will likely be skirmishes for the next six months – but Trump will think twice before taking any action against China, which dims the prospects for a V-shaped economic recovery,” said Steven Okun, a Singapore-based senior advisor with McLarty Associates, a consulting company.

Beijing’s strategy seemed to be long in the making, beginning soon after street protests erupted in Hong Kong a year ago in response to an extradition bill and soon evolved into a broader anti-China movement.

Still, Beijing’s decision stunned many when it was reported on Thursday at the beginning of the Communist Party’s National People’s Congress.

“Hong Kong is in a state of shock,” said Willy Lam, a political analyst at the Chinese University of Hong Kong.

A draft of the decision published in local media on Friday authorizes Beijing to insert the new national security laws directly into the Basic Law, Hong Kong’s quasi-constitution, circumventing the local government. It calls for Chinese security institutions – which have long maintained a covert presence in Hong Kong – to open branches inside the territory and for Hong Kong’s judiciary, which until now has been relatively independent, to punish “actions that harm national security.”

Analysts said the erosion of legal protections could accelerate the flight of affluent and middle-class Hong Kong families to the West and drive more businesses out of the global financial center. Many foreign companies began to shift personnel and capital to Singapore, Taiwan and elsewhere after last summer’s protests.

Lam said Hong Kong would pay an economic price for the law because businesses rely on independent courts free of political meddling.

“The Chinese economy is not doing very well and this will have a detrimental impact on business in Hong Kong,” Lam said. “But for Xi Jinping, law and order is more important than business. He would rather solve the law and order problem first and pacify the foreign businesspeople later on.”

The law also likely erases whatever hope was left for Taiwan embracing a return to China under the “one country, two systems” arrangement that supposedly protected Hong Kong’s autonomy under Chinese rule. Taiwan politicians have condemned the security law.

“The firewall between Hong Kong and China’s draconian laws and institutions is being removed. The Chinese government wants to burn the people of Hong Kong,” said Eric Lai, spokesman for the Civil Human Rights Front, a coalition that helped organize many of last year’s major marches.