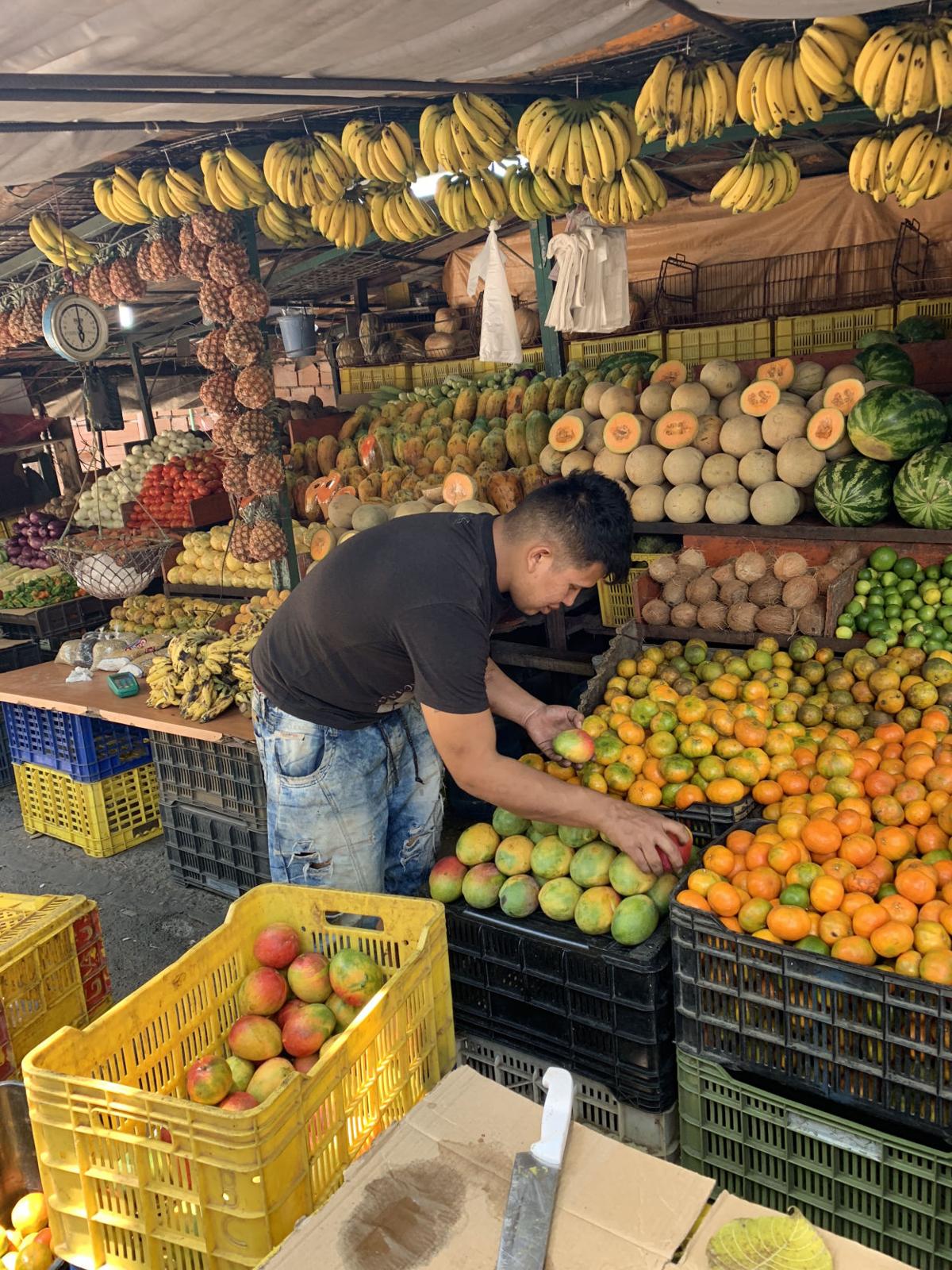 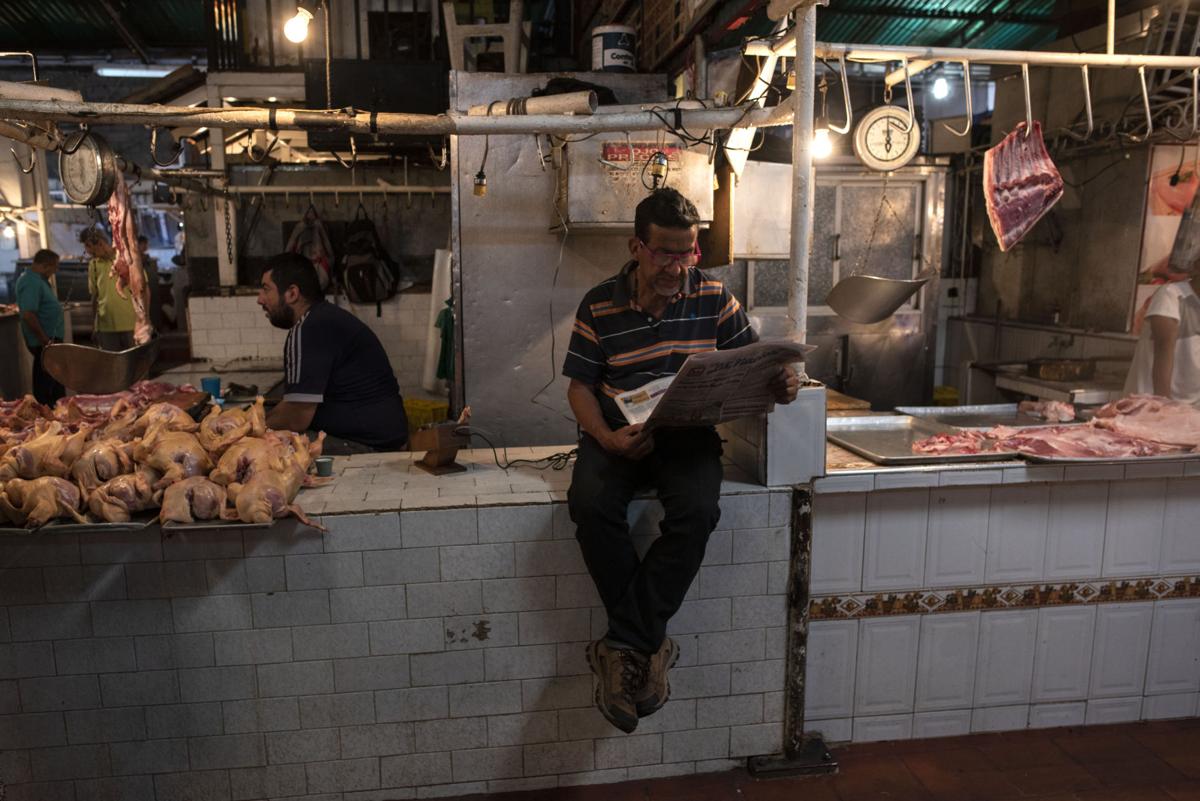 BAD NEWS: A man reads a newspaper at a butcher's stall at a market in San Cristobal, Venezuela. Michael Robinson Chavez/The Washington Post 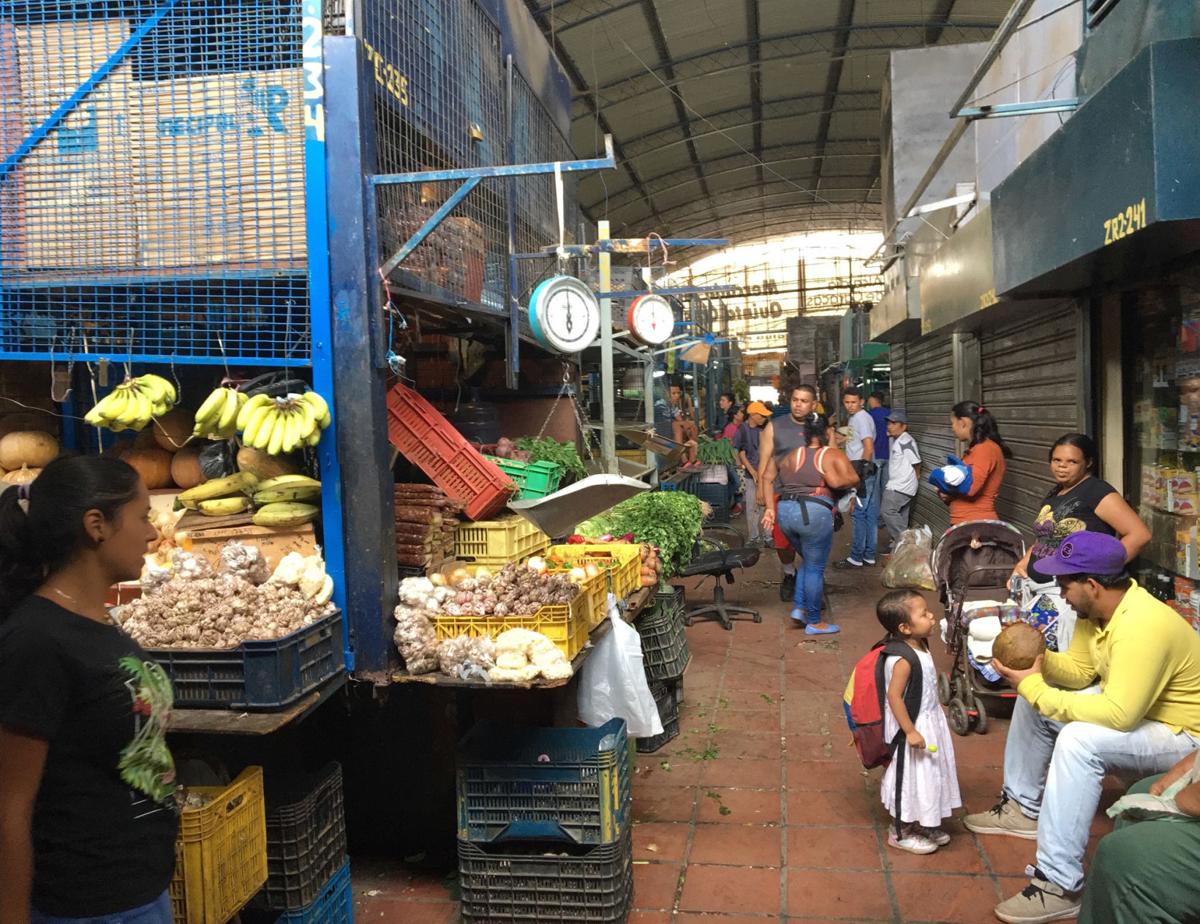 BAD NEWS: A man reads a newspaper at a butcher's stall at a market in San Cristobal, Venezuela. Michael Robinson Chavez/The Washington Post

CARACAS, Venezuela – The lights are back on at Quinta Crespo, a bustling public food market in central Caracas. But after Venezuela's worst blackout in history, there's a sense of dread at Nancy Rodríguez's fruit and vegetable stand.

Word from the countryside is that farmers have been unable to find seeds and fertilizer. And the planting season is about to start. Everyone from Wall Street analysts to Rodríguez, who has sold carrots, parsley, bananas and garlic here for decades, worries that this will be the year Venezuela's agricultural sector collapses.

"The situation is critical," said Rodríguez, 70, squatting on a plastic stool as customers handled her food, then moved on without buying. "There's already very little production."

The five-day nationwide blackout this month was a dramatic sign of the crumbling of Venezuela's infrastructure. But it was probably only a curtain-raiser for a broader disaster expected in the coming weeks and months, according to economists, diplomats and aid workers here.

Already, the economy of this oil-rich nation has shrunk by about half since 2014 – the most precipitous drop in recorded Latin American history. This year, economists expect imports of food, medicine and other goods to plummet by 50 percent or more, as new U.S. sanctions choke off income from Venezuela's mismanaged oil industry.

"We are not returning to normalcy," said Susana Raffalli, the country director for the relief agency Caritas Venezuela. "This is the beginning of a phase in which we'll see a more profound collapse of services in the country."

In January, the Trump administration began ratcheting up pressure on President Nicolás Maduro's government, in the belief that it would drive the powerful Venezuelan military to switch its allegiance to opposition leader Juan Guaidó.

That appears to have been a miscalculation.

Most economists blame the country's skyrocketing inflation and acute shortages on falling oil prices, gross mismanagement, and the far-left policies of Maduro and his predecessor Hugo Chávez. But the U.S. sanctions are intensifying the humanitarian crisis.

Some economists are predicting famine in this country of 30 million. Others say the outlook may not be that extreme. But most foresee growing malnutrition in a nation where babies are dying because of a lack of food. And migration – already "on the scale of Syria," according to the U.N. refugee agency – is likely to escalate.

At Quinta Crespo, a vast warren of fluorescent-lit shops smelling of poultry and overripe fruit, shopkeepers are nervous. Luis Eduardo Alvarez, 29, who sells deli meat, cereal, pasta and other groceries, says he's ordering half as much stock as usual, for fear that hungry people will start looting.

"Things could spin out of control," he said.

Venezuela's already battered economy suffered multibillion-dollar losses during the blackout that began on March 7. In the first two days alone, more than 4.4 million pounds of meat spoiled because of a lack of refrigeration, according to the national ranchers' association.

As power shut down, the country's aluminum industry was further crippled: Molten metal solidified and destroyed machinery. When power was restored, leaping voltage burned out computers, air-conditioning units and refrigerators. Transformers blew up.

Some of that equipment can be repaired. The problem, analysts say, is that the country could suffer another outage at any moment.

"We are at a point of total collapse," said Julio Molina, head of the electrical engineering faculty at the Central University of Venezuela.

Maduro has blamed the power failure on a U.S. cyberattack. Engineers and analysts dismiss the claim. They think it started with a brush fire near power lines or an electrical substation in southern Bolivar state that eventually knocked out the Guri hydroelectric plant - the source of 80 percent of the country's power.

Because of official secrecy about power production, no one outside the government knows how severe the damage was. But one thing on which experts agree: Poor maintenance, underinvestment and an exodus of qualified technicians have left the system in a parlous state.

Miguel Lara, a former president of the state-run entity that oversees the electricity system, said Venezuelans can expect "a pattern of blackouts and rationing" in coming months. (Calls and emails to Corpoelec, the government electricity authority, were not returned).

The second-tier effects of the power failures could be profound. In many areas, water service still isn't back to normal, because there isn't enough electricity to run the pumps.

Aura Giron, 70, is a retired government auditor in Caracas. Until recently, she said, she had running water at her apartment from Friday through Sunday, and sporadically on other days.

"Now it just comes once a day," she said. For half an hour.

The capital's water infrastructure was already badly decayed, with broken pipes, an aging aqueduct and a lack of reservoir capacity.

"The international credits, the huge quantities of money that supposedly were going into fixing the aqueduct, we don't know where they went," he said. (Hidrocapital's media office declined to comment).

Maduro claimed last week that he had triumphed in the "electrical war" with Washington. But he also called on Venezuelans to buy battery-powered radios, candles and flashlights and extra water tanks "so that every home is ready."

"In four months, we'll be seeing less food," he said. Farmers in his home state of Merida are telling him they have no seeds.

"And the river they use to water the plants is drying up," he said.

The government nationalized the farm-supply business nine years ago. Analysts say authorities have not imported seeds, fertilizer or pesticides for this year's crop. (Calls and emails to the Agriculture Ministry were not returned.)

Venezuela's agricultural production had been slumping for years under government price controls and the expropriation of farms. Now, the country's farms can fulfill only about 20 percent of domestic food needs, said Carlos Albornoz, head of the national dairy and livestock association.

But even that could drop.

"We are 30 days from the start of the agricultural cycle, and we simply don't have the inputs, the tools, the seeds," Albornoz said. "An agricultural collapse is absolutely inevitable."

Francisco Rodríguez, the senior economist at the New York investment bank Torino Capital, is a native of Venezuela. Unless the political crisis is resolved, he said, "Venezuela is very likely to undergo a famine this year."

Imports are expected to drop sharply as economic problems snowball and sanctions bite.

Sanctions have closed off the biggest market for the nation's oil, and its most important source of hard currency: the United States.

Rodríguez predicted that imports would fall from $33 billion in 2018 to $14 billion this year.

The State Department said in January that sanctions would not target "the innocent people of Venezuela." The United States has attempted to send humanitarian aid to the country, but Maduro has blocked it, saying it's aimed at undermining him.

Hunger could spur more looting. In the oil capital of Maracaibo, about 500 businesses were ransacked during the blackout.

Peña, the fruit vendor, said a truck hauling bananas and limes to his stand was attacked recently by bandits who took all 260 cartons of fruit.

"People steal because they can't find any other way to eat," he said.

Guaidó, the president of the National Assembly, now poses the biggest challenge to Maduro since he took office in 2013. The opposition leader says that Maduro's reelection last year was deeply flawed, and that he is Venezuela's rightful leader. The United States and about 50 other countries recognize him as president.

Maduro has cast Guaidó as a "puppet" and a "clown" attempting a U.S.-backed "coup." But his government is scrambling to contain the economic wreckage. It has asked buyers if it can swap crude oil for gasoline in hopes of keeping gas stations in the sprawling capital from shutting down, said Guillermo Arcay, an economist at the Caracas consulting firm Ecoanalitica.

Authorities are prioritizing obtaining gasoline even over diluents, the chemicals that are used to thin Venezuela's sludgy crude so it can be exported through pipes.

Officials managed to contain monthly inflation in February to about 60 percent by sharply limiting banks from lending, Arcay said. But inflation is expected to soar again in March, he said, because the government is furiously printing money to pay employees.

The Venezuelan money supply - as measured by cash, checking accounts and bank accounts accessed by debit card - is now doubling every month, he said.

As for the oil industry, production slipped nearly 9 percent from January to February, to just over 1 million barrels a day, according to the Organization of Petroleum Exporting Countries. That's about half as much as Venezuela was pumping in 2017.

"There's a high probability that the worst of the crisis is yet to come," Arcay said.