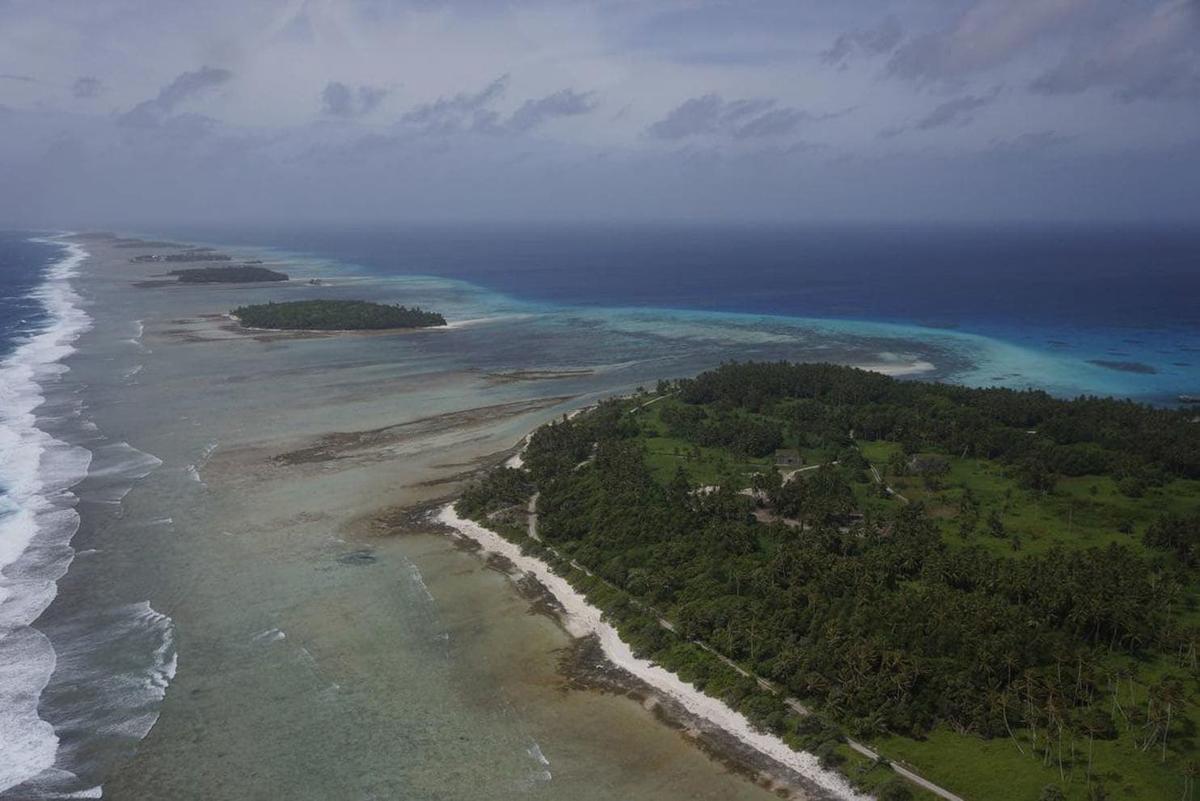 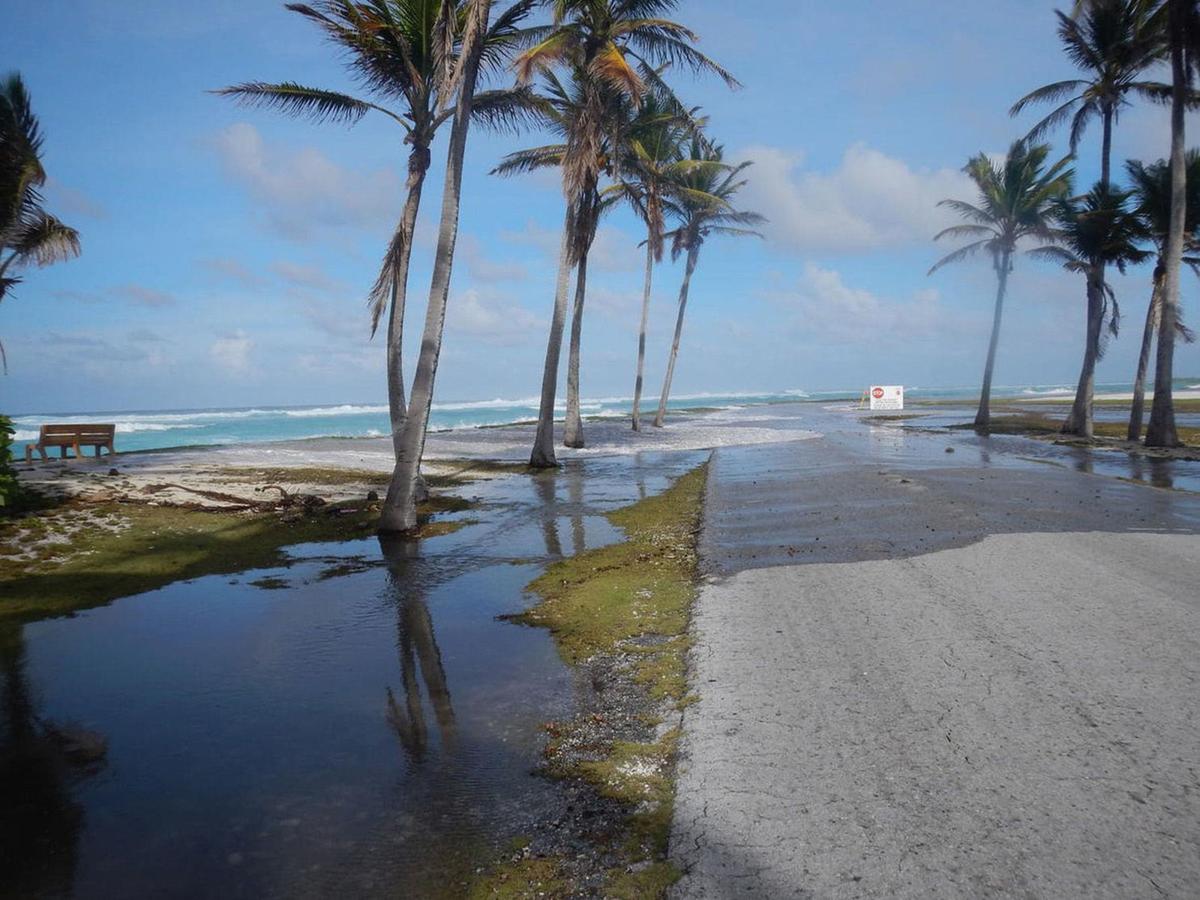 More than a thousand low-lying tropical islands risk becoming "uninhabitable" by the middle of the century – or possibly sooner – because of rising sea levels, upending the populations of some island nations and endangering key U.S. military assets, according to startling new research published Wednesday.

The threats to the islands are twofold. In the long term, the rising seas threaten to inundate the islands entirely. More immediately, as seas rise, the islands will more frequently deal with large waves that crash farther onto the shore, contaminating their drinkable water supplies with ocean saltwater, according to the research.

The islands face climate-change-driven threats to their water supplies "in the very near future," according to the study published in the journal Science Advances.

The research also has ramifications for the U.S. military, whose massive Ronald Reagan Ballistic Missile Defense Test Site sits, in part, on the atoll island of Roi-Namur – a part of the Marshall Islands and the focus of the research.

The U.S. military supported the research in part to learn about the vulnerability of its tropical island installations. The Pentagon base at Roi-Namur and surrounding islands supports some 1,250 American civilians, contractors, and military personnel.

"This study provided a better understanding of how atoll islands may be affected by a changing climate," Defense Department spokeswoman Heather Babb said in a statement. "While no decisions have been made about Department of Defense activities on the islands based on the study, DOD continues to focus on ensuring its installations and infrastructure are resilient to a wide range of threats."

The low-lying island, which rises barely 6 feet above the current sea level, is part of the vast Kwajalein coral atoll, a structure that formed as coral reefs grew around a sinking volcanic island long ago. That's the origin of more than a thousand other low-lying, ring-shaped atoll islands or atoll island chains across the Pacific and Indian oceans. Most are not populated, but some, like the Marshall Islands or the Maldives, are the home of tens or even hundreds of thousands.

While seas are rising by 3.2 millimeters per year at the moment and expected to rise even faster in years ahead, Roi-Namur has a good chance of avoiding total inundation this century.

But the new research – conducted by researchers from the U.S. Geological Survey, the National Oceanic and Atmospheric Administration, and several other institutions in the U.S., Monaco, and the Netherlands – suggests that saltwater contamination of the island's aquifers would probably occur at just 40 centimeters (about 15 inches) of sea level rise. Five to six centimeters globally have already occurred since the year 2000, and sea level rise is even faster at Kwajalein atoll.

The danger comes because of the increasing ability of large waves to spill across the island and sink into its groundwater.

"Historically, there would be an overwash event due to a cyclone or typhoon every 20 or 30 years," said Curt Storlazzi, a U.S. Geological Survey researcher who led the study. "Every 20 or 30 years, or more, communities can recover in that time. The concern is that with sea level rise, those flooding events are going to happen more frequently."

The "tipping point" in the study varies depending upon the rate of climate change - and above all the stability of Antarctica. In the worst case, the paper says it could come "before 2030." However, a prominent sea level rise expert not involved in the study, Bob Kopp of Rutgers University, questioned that especially dire finding in an interview with the Post.

"They're asking the right questions, they're doing the right sorts of analysis, but I'm a little skeptical of some of their early century dates for some things," said Kopp.

For less dire scenarios, the critical moment is pushed farther off to the decade between 2030 and 2040 for a high warming scenario without Antarctic collapse, or 2055 to 2065 for a middle range warming scenario. Kopp said that middle scenario is certainly consistent with what we know, and provided an analysis suggesting that while there is indeed a major threat here, it won't arrive as soon as 2030 but could by the 2050s.

Storlazzi said if anything, Roi-Namur is probably somewhat higher in elevation than many other coral atoll islands. Hence the conclusion that so many of them could be at risk – the study says that "most" are - and that the occupied ones might also, in the relatively near future, have to worry about their drinking water supplies.

The research was commissioned by the Pentagon's Strategic Environmental Research and Development Program and published in a more lengthy form earlier this year, in a report that partly focused on helping the military identify sites where its assets could be vulnerable.

There, the researchers called the inquiry on Roi-Namur a precursor to a comprehensive examination of numerous atoll islands managed by the Defense Department "that are most vulnerable to sea-level rise and associated impacts over the next 20 to 50 years."

"If these impacts are not addressed or adequately planned for, as it becomes necessary to abandon or relocate island nations, significant geopolitical issues could arise," they wrote.

The U.S. manages military installations or assets not only at the Marshall Islands but also at Wake Island, another Pacific atoll, and Diego Garcia in the Indian Ocean. There are also decommissioned installations at Midway and Johnston Atoll.

John Conger, director for the Center on Climate and Security and former acting assistant secretary of defense for energy, installations and the environment, said that the department "is increasingly cognizant of threat of sea level rise on its installations."

Part of the risk can be addressed by adaptive measures, he said, but that's costly. He called the new study "a little bit jarring, and they are going to have to make some operational decisions. This is sort of the front lines of sea level rise and climate change. It's not that the entire island is going underwater, it's that you don't have drinking water. It's going to wreck the aquifer."

Rising seas threaten even some projects that remain under construction.

Case in point: the $1 billion "Space Fence," a radar installation on Kwajalein Atoll that is intended to track tens of thousands of pieces of space junk - some of them as small as a baseball - in an effort to keep orbiting satellites and astronauts safe. The state-of-the-art project is being constructed for the Air Force by Lockheed Martin and is supposed to be fully operational later this year.

But its location on the tiny atoll already has raised concerns that the site could face routine flooding threats within a matter of decades, and that salt water could damage its expensive equipment.

The study underscores why many small island nations clamored to ensure that the 2015 Paris climate agreement included language requiring the world to strive to limit global warming to just 1.5 degrees Celsius (2.7 degrees Fahrenheit) above preindustrial levels, an extremely stringent target. Atoll-dependent nations that have been heavily involved in the push for climate action include not only the Marshall Islands but also the Maldives, Kiribati, and Tuvalu.

But with the planet already 1 degree Celsius (1.8 degrees Fahrenheit) warmer, holding warming to 1.5 C seems unlikely to occur, because it would require extremely rapid shifts away from the current energy system toward renewables, rather than the more gradual change now underway.

The new study didn't address specific Paris climate targets, but Kopp's additional analysis found that even under a 2 degree or 1.5 degree Celsius climate scenario, by late in the century, more than 40 centimeters of sea level rise would probably have occurred. Still, these scenarios would buy atoll islands some time.

Heine, the Marshall Islands president, said there is no ignoring the affects climate change already is having. Just last week, she said, waves washed over parts of the island nations, thanks to a combination of wind and ocean currents exacerbated by sea level rise. Residents were left to clean up flooded roads and neighborhoods.

"It's more of a nuisance than anything, but things like that are coming every other month or so," she said. "It makes people feel insecure in their own homes."

Her government is doing what it can to protect its vulnerable shorelines, building new sea walls with the limited resources it has. But it's not nearly enough. And she has watched with exasperation as the United States has backed away from the Paris climate accord under President Trump, whose administration has scarcely acknowledged the looming threats posed by climate change.

"The leaders of the United States need to get on board ... We should stop denying what is happening and help vulnerable countries like ours," Heine said. "It's important for people in the U.S. to realize that this is real, it's happening to people. We are not the ones creating this, but we are the ones who have to live with it."

A critical issue for the islands in question is the fate of the coral reefs from which they are made, and which surround them. Reefs break waves, helping to prevent overwash events, and they also grow to keep pace with sea level rise – at least to an extent.

But even as seas are rising, coral reefs around the world have been suffering from severe bleaching events, and are also weakened further by acidifying oceans. This suggests that reefs could be hobbled and, in a weakened state, unable to protect their islands from waves.

"The coral reefs these days have suffered not only of sea level rise but mostly in terms of acidification of the ocean and also increase of temperature," said André Droxler, a geoscientist at Rice University who has studied how corals succumbed to fast rising seas at the end of the last ice age. "So climate change will increase the rate of sea level rise, but also it will decrease the possibility for these corals to keep up."

The current study even suggests that if reefs falter – as they are doing around the world – then the major wave risk to coral atoll islands could come still earlier.

Droxler said the current study reminded him of the Maldives, where he has worked, and which faces a situation similar to that of the Marshall Islands. "The maximum elevation is 2.4 meters, and there are more than 140,000 people living in 2 square miles," he said of the capital island of Male.

"It is kind of the ultimate example of the destiny of these tropical islands which are so low in elevation," said Droxler.

And each passing year, as seas continue to rise and the nations or the world wrestle with how to cut carbon dioxide emissions, thousands of islands grow closer to a reckoning.

"The longer we talk about this," said Conger, "the more the distant future becomes the near future."

Guam should start testing at the airport, seaport

In the Northern Marianas, 30% of the commonwealth's COVID-19 cases were detected through testing at points of entry. Read more

2020 Census of Guam: Reasons behind the questions